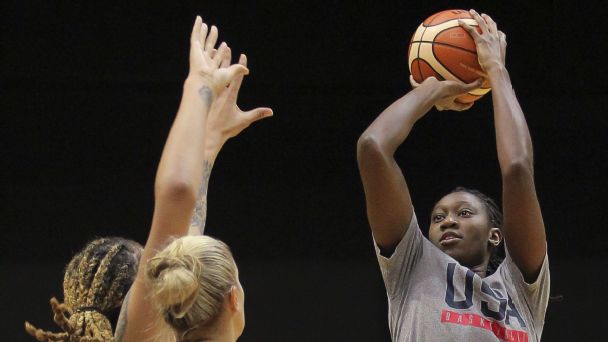 COLUMBIA, S.C. -- Tina Charles' relentlessness always stands out, even when she's on the court with the country's best women's basketball players.

That's a three-time Olympian talking to another three-time Olympian about a two-time Olympian. The kind of conversations that happen at star-studded gatherings like USA Basketball's team training camp held Friday through Sunday on South Carolina's campus as part of preparation for September's World Cup in Tenerife, Canary Islands.

Charles is the centerpiece of the Liberty, and Smith also returns most of the same roster that finished the regular season last year with 10 wins in a row. The new one-and-done playoff format for the early rounds burned the Liberty for the second consecutive year, but there were plenty of positives to take from the 2017 season.

Then in October, coach Bill Laimbeer left to take over the Las Vegas Aces team that relocated from San Antonio. Smith, an assistant, had seemed positioned to move into a head-coaching role, so that transition wasn't unsettling for the Liberty fan base.

What came in November was: The MSG Company wanted to sell the Liberty, a WNBA original franchise that had always been owned by MSG head James Dolan.

For the next two-plus months, news about the Liberty was scarce. Players and staff were told not to talk to media or fans about the sale, and for the most part, they didn't know any details anyway. Most people involved with the WNBA seemed certain the franchise would stay in New York, but that was about it.

The rumor mill had multiple potential buyers, although none were publicly identified. Last week, MSG announced it would continue to run the team while continuing to look for a buyer, which allowed the WNBA to release its 2018 schedule.

The Liberty will have just two games in their longtime previous home, Madison Square Garden, and both tip off at 11 a.m. ET. The other 15 home dates will be at Westchester County Center in White Plains, New York, about 30 miles north of the Garden. It's a small arena that seats around 5,000 fans and is also home to the Knicks' G League team. It's near the practice facility used by MSG-owned teams.

For Liberty fans not close to White Plains who depend on public transportation to get to games, the Westchester County Center can present significant challenges from timing, logistics and cost standpoints. And even those who have cars and can drive there will face inevitable traffic issues. It's in stark contrast to Madison Square Garden, which sits above Penn Station, a major public transportation hub in Manhattan.

Smith, who has had a lot dropped on her plate in the past few months, doesn't try to sugarcoat any of this, but also hopes that Liberty fans -- who've proved resilient through other issues, such as the team's 2011-13 relocation to the Prudential Center in Newark, New Jersey, during Garden renovation -- will rise to the occasion again.

"The Garden was a special place for everybody, and yes, this is going to affect some people," Smith said. "I truly understand this whole offseason has been a frustration for our fans. There really has not been attention to them. We just hope they'll stick with us and navigate it along with us. We want them to be as big a part as they've always been for the Liberty. And even those who are just watching on TV, we'll take that, too. I just hope they continue to follow us.

"I want to make sure we do our part on the floor, and make them feel appreciated that they've made the effort to stay involved. Getting [to the Westchester County Center] will be different for everybody. I believe it won't be as easy for most fans."

Charles, a native New Yorker, understands that, too.

"Me growing up in Queens, New York, the first time I ever set foot in White Plains was when I got traded to the Liberty," she said. "I know most of our fans are from the city. And if you're talking about 7 p.m. games on weekdays ... it's just going to be hard for people to get there. But you hope to gain new fans in the Westchester community."

Ultimately, this is something that Smith and her players can't control. MSG Company has been trying to maximize profit as much as possible with other events to be held at the Garden, and it's likely the Liberty might have been squeezed out of dates there even if the team wasn't up for sale.

So Smith has tried to focus instead on what can be controlled.

"I've been through things in the WNBA -- being traded, being on a team [the Detroit Shock] that was sold," said Smith, who retired from playing in 2013. "And just in life, you have to understand that you don't control a lot of things. You keep your head about you, and do your job.

"For people on our business side, I think it's been harder for them than me. I got to stay connected with our players, and I think they've done an amazing job and handled it well. I'm sure they've gotten a lot of questions from people and other players, and they've been going about their lives and have been patient through the process."

Of course, since the team is still for sale, the process isn't over. But Smith, who said she is still finalizing her coaching staff, and the Liberty know what things look like for the 2018 season, and that's their focus.

The Liberty announced Friday that Kia Vaughn, Bria Hartley, Rebecca Allen and Lindsay Allen all have been re-signed. Smith said guard Brittany Boyd, who missed almost all of last season with a torn Achilles tendon suffered in May, is progressing well with rehabilitation. Guards Epiphanny Prince, Sugar Rodgers and Shavonte Zellous return. The Liberty have the No. 10 pick in the first round of the draft, and Smith hopes to at least get a solid reserve who can contribute.

Charles has not signed yet, but has been designated the Liberty's core player and clearly has no desire to leave.

"What's been going on still doesn't take away the two goals I've had in my career: to wear a Liberty uniform and win a championship," said Charles, who's entering her ninth season in the WNBA and fifth in New York. "Personally, that means everything to me.

"In my tenure playing for the Liberty, I've never questioned the individuals on the team. I'm with them, seeing them come in on days off, being coachable, listening and committing to our process. And I trust our management to put together the best team."

"She has just been a pillar for us in a lot of ways," Smith said. "Being a New Yorker, being in the community. And she is a phenomenal talent and great teammate. I know she'll do her part. We have to make sure everybody else knows they have to be there to help her along the way."
Report a correction or typo
Related topics:
sportsespnwnbanew york libertytina charlesus womens national teamdawn staleyusa basketballnews au espnwespnwkatie smith
Copyright © 2022 ESPN Internet Ventures. All rights reserved.
TOP STORIES
Police: Suspect charged in murder of Upper East Side mom
Long Island man receives kidney from neighbor
Shark patrols after man bitten; Tri-State beaches gear up for July 4
17-year-old killed in Hamilton Heights shooting
NYC public school supplies, food, COVID tests found dumped
Happy Bobby Bonilla Day: Here's why the Mets pay him every July 1
Poison frontman Bret Michaels hospitalized with undisclosed illness
Show More
2 officers killed, others injured in Eastern Kentucky shooting: police
ESSENCE Festival descends on New Orleans to celebrate Black culture
Family member beats shark to free teen girl from its jaws
United flight cuts take effect as July 4 holiday travel kicks off
Nathan's Hot Dog Eating Contest competitors weigh in on Coney Island
More TOP STORIES News