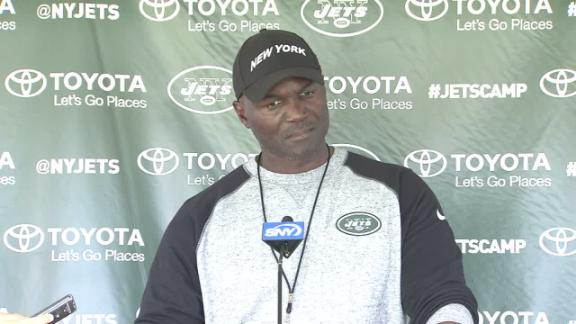 "They know how I feel. We've addressed it," Bowles said. "I really don't have time for a bunch of B.S. It happened a year ago. We had six months to talk about it. All that s--- is over. [Richardson] has been well-informed of that. We've moved on from that."

Bowles said he's had "team discussions" and "individual discussions" about the issue, which has cropped up since last season because Richardson has repeatedly criticized Marshall. Clearly, Bowles is tired of it.

"I'm going to repeat this answer one more time," he said. "I don't have time for B.S. We've moved on. You're going to get that answer the next 30 times you ask it. We can move on or the interview can be over. I don't care. Either way is fine with me."

Richardson and Marshall clashed last season, starting with a Week 3 locker-room altercation in which they nearly came to blows. On Monday, Richardson renewed the hostilities in an interview with ESPN New York 98.7.

He accused Marshall of having a "drama queen-ish" attitude last season, adding, "That man knows what he did to the locker room. I was the one who addressed it and I would still address it to this day. If he can't come out [in the] media and tell 'em what he did and how he actually quit on his team way before the season was over, that's all in itself."

The Jets released Marshall in the offseason as part of their roster purge. One of the goals was to improve the team's chemistry. Bowles made it a focal point, going so far as to bring in military personnel to conduct team-building exercises during the offseason.

In the spring, Richardson said the locker room was a better place than last season. Asked why, he said there were "15 reasons" -- an obvious reference to Marshall, who wore No. 15. At the start of training camp, Richardson said he wants to play linebacker in the upcoming Jets-Giants preseason game, which could allow him to tackle Marshall.

Richardson's comments on Monday pushed Bowles over the edge.