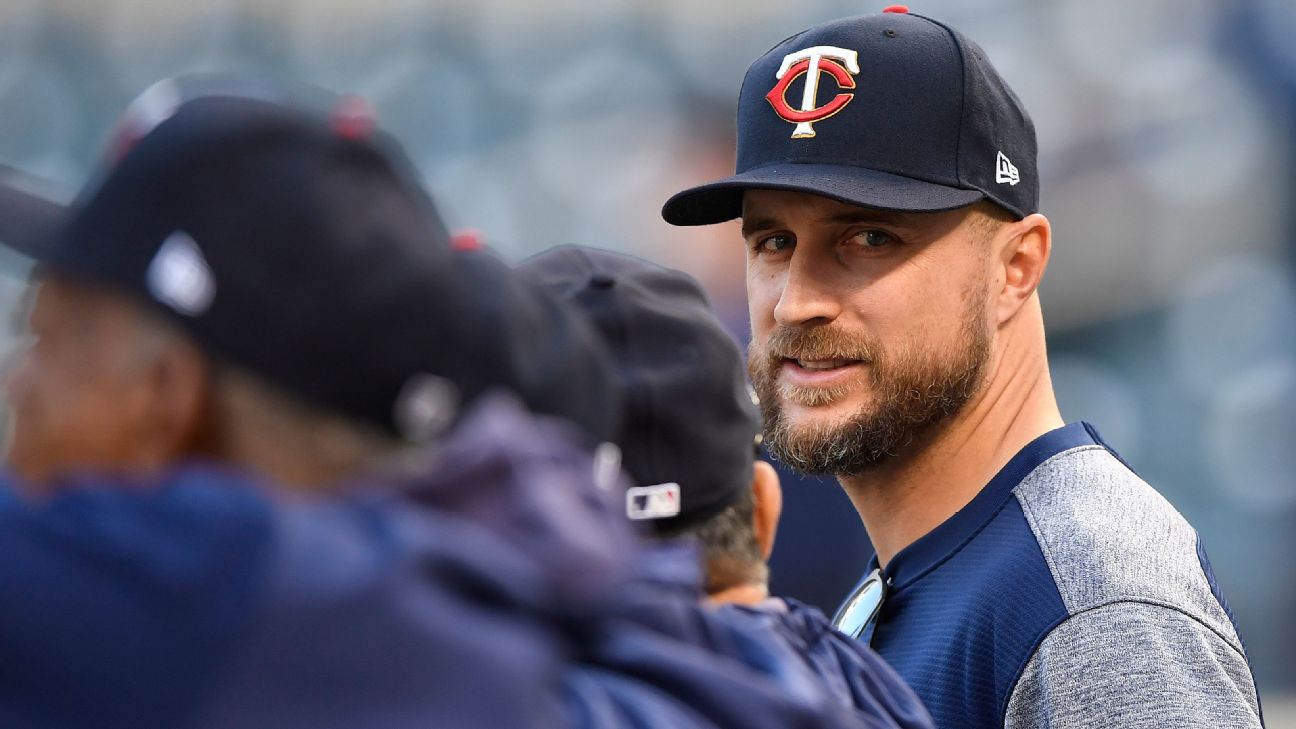 ESPN
By Bradford Doolittle
Rookie skipper Rocco Baldelli led the Minnesota Twins to one of baseball's most surprising campaigns, a homer-happy season capped with Tuesday's announcement that he had won the 2019 American League Manager of the Year award.

He narrowly beat out Aaron Boone of the New York Yankees. Both received 13 first-place votes in balloting by the Baseball Writers' Association of America revealed Tuesday night, but Baldelli got more second-place nods.

The 38-year-old is the youngest to win the award.

Results are tabulated on a system that rewards five points for first place, three points for second place and one point for third place.

Baldelli had never managed before being hired by the Twins after the 2018 season to become the youngest skipper in the majors. With a laid-back, player-friendly style, Baldelli adapted quickly to his new role, leading the Twins to 101 wins and the franchise's first AL Central title since 2012. It was the second-most victories in the 119-year history of the franchise and most since Sam Mele led Minnesota to 102 wins in 1965.

Baldelli became Minnesota's second AL Manager of the Year in three years. Hall of Famer Paul Molitor won the award in 2017 after guiding the Twins to the AL wild-card game but was fired after Minnesota slipped to 78-84 in 2018. Ron Gardenhire (2010) and Tom Kelly (1991) also have won the award for the Twins.

"We have a group of young players here in Minnesota, a nucleus of young guys that were really coming into their own in a lot of ways,'' Baldelli said. "I think some of those guys were ready to take the next step in their career offensively, and a couple of those guys were doing that at the same time. We also complemented them with some quality, veteran players.''

From a tactical standpoint, Baldelli displayed a minimalist approach with an offense that erupted for a big-league-record 307 homers this season. The Twins attempted just 49 stolen bases on the season, 18 fewer than any other team.

The station-to-station approach worked as Minnesota returned to the playoffs.

"There's really no playbook,'' Baldelli said. "You certainly take advantage of the resources around you, the people who you trust, you rely on them in a lot of ways. I did that in a lot of different ways.''

As a player, Baldelli also got off to a fast start in what eventually turned into a hard-luck career. He finished third in the 2003 AL Rookie of the Year voting for the Rays, becoming one of the most popular players in franchise history. But his career was undermined by repeated injuries and a muscular disorder that eventually led him to retire after the 2010 season.

After his playing career ended, Baldelli worked for the Rays in a variety of coaching and front-office roles beginning in 2011, eventually becoming the club's major league field coordinator under Cash in 2018.

Despite the fast start to his managerial career, Baldelli is facing the same hump that Gardenhire and Molitor couldn't get over: winning in the postseason. After being swept in three games by the Yankees in the American League Division Series, the Twins have dropped a record 16 consecutive playoff games -- 13 of them to New York. Beating the Yankees is just one of the things Baldelli has yet to learn after just one season in a big league dugout.

"The experience part of this job does matter, and as someone who never had that experience, I was figuring things out on the go all the time," Baldelli said. "I found that extraordinarily challenging, but also very rewarding. Every day when I left, I took something home with me, and I'll keep those things forever. I wouldn't trade anything that just happened for anything in the world."

Boone, 46, led the Yankees to 103 wins despite numerous injuries during his second season in the New York dugout. The Yankees won their first AL East title since 2012, but ultimately came up short in pursuit of the franchise's first pennant since 2009. New York went without a pennant during the 2010s, its first decade without an AL flag since the 1910s.

He's off to a historic start to his managerial career after taking over the Yankees' dugout before the 2018 season. He's the first manager to ever win 100 games or more in both of his first two seasons, and his 203 victories are the second most for a skipper over his first two campaigns.

Boone became the 33rd manager in Yankees history before last season, leading New York to 100 wins and finishing fifth in the AL Manager of the Year voting. In many ways, Boone's second season was more challenging than his first thanks to rampant injuries that hindered his efforts all season. New York saw 30 players spend time on the injured list, for a combined total of 2,688 days, most in the majors. Among key players who missed time were sluggers Aaron Judge (limited to 102 games) and Giancarlo Stanton (18 games) and No. 1 starter Luis Severino (12 innings pitched).

Cash, 41, led the Rays to their second straight season of 90-plus wins, finishing with 96 -- second most in franchise history. Tampa Bay earned an AL wild-card berth to return to the postseason for the first time since 2013. After winning the wild-card game at Oakland, the Rays went on to take the eventual AL champion Houston Astros to the full five games in the ALDS.

Though he has spent just five seasons in the Rays' dugout, the attrition rate among managers has been so high during Cash's time in Tampa Bay that he already has become the third-longest-tenured skipper in the majors. A spate of managerial changes at season's end meant that only Oakland's Bob Melvin (nine years) and Francona (seven) have been at the helm of a club longer than Cash. Hinch has led the Astros for the past five seasons.

More than 5,400 deaths in NY, but hospitalizations down
Some states more successful than others at staying home, data shows
How do we restart life after coronavirus?
'We are not there yet,' NYC mayor says, but also sees hope
How international travel left NY vulnerable to coronavirus
Show More
Earl Graves Sr., founder of Black Enterprise magazine, dies
Man fatally stabbed on J train in Williamsburg
White House press secretary Stephanie Grisham steps down
Tuesday's supermoon to be biggest, brightest of the year
Lowe's will close on Easter during coronavirus pandemic
More TOP STORIES News