Tyronn Lue: LeBron James 'has to set the tone early' vs. Raptors 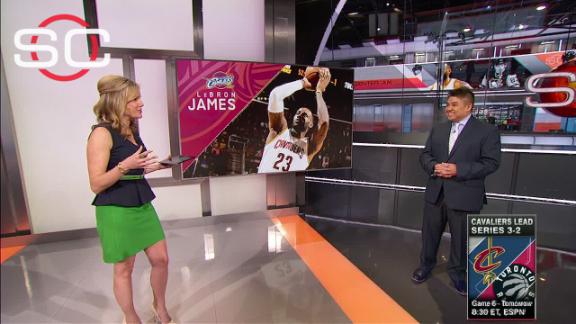 Coach Tyronn Lue is calling for LeBron James to be more assertive as the Cleveland Cavaliers have an opportunity to close out the Eastern Conference finals when the series shifts back to Toronto.

"He has to be very assertive," Lue said Thursday before the team boarded its charter flight. "He has to set the tone early and the rest of the guys will follow."

James has stuck a calming tone throughout the series and often allowed teammates Kyrie Irving and Kevin Love to establish themselves offensively early in games.

He only took 17 shots in the Cavs' Game 4 loss, leaving questions as to whether he needed to enforce his will more. James, however, has dismissed that notion and reiterated it Wednesday.

"We didn't get to this point in our season by me taking over every game, James said. "My presence on the floor is much bigger than what numbers talk about. When you have a young superstar like [Irving], you have Kevin, who's a superstar as well, and they've helped us get to this point, so you don't just throw in the kitchen sink because we lose two games or we didn't play as well as we could. There may be a time when I may have to have one of those big games, but until then, just relax."

Lue may believe that time is now. With the Western Conference finals possibly on the verge of being wrapped up, the Cavs coach made it clear he intends to press his team to finish off the Raptors in Game 6.

"This is our Game 7," Lue said. "We've been working the whole year to get to this point."

Counting the regular season, the Raptors and Cavs have played eight times and the home team is undefeated.

The Cavs didn't handle the Raptors' crowd or energy well in Games 3 and 4, as they got out of rhythm on offense at times and failed to crack 100 points in consecutive games for the first time in more than 20 months -- a span of 27 games.

Lue said he plans to use film sessions and the shootaround before Game 6 to set a more intense tone.

"Those two games in Toronto were probably my first legitimate two road games that I've experienced in my playoff career," Irving said. "Our communication, everything had to be a lot sharper, and we took a lot that we had to learn from that game, including myself.

"I know I probably wasn't the only guy that felt that way. ... Going into Game 6, I feel a little bit more prepared than I was going into Games 3 and 4 of knowing what to expect, what it's going to be like, what to expect from my teammates and what to demand from them as well."