U.S. Soccer: We expect our players, coaches to stand for anthem 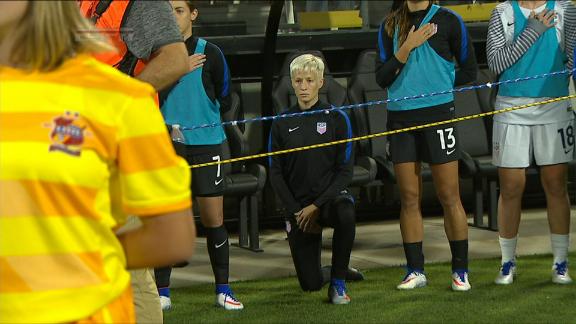 COLUMBUS, Ohio -- For the second time in recent days, but the first while wearing the uniform of the United States women's national team, Megan Rapinoe chose not to stand for the national anthem prior to a soccer game.

Instead, Rapinoe knelt on the sideline during "The Star-Spangled Banner" before Thursday's 9-0 exhibition win against Thailand in what she has described as a gesture of solidarity withSan Francisco 49ers quarterback Colin Kaepernickand others protesting social inequalities.

U.S. Soccer released a statement during the game, saying it did not agree with Rapinoe's decision.

"Representing your country is a privilege and honor for any player or coach that is associated with U.S. Soccer's National Teams. Therefore, our national anthem has particular significance for U.S. Soccer," the statement read. "In front of national and often global audiences, the playing of our national anthem is an opportunity for our Men's and Women's National Team players and coaches to reflect upon the liberties and freedom we all appreciate in this country. As part of the privilege to represent your country, we have an expectation that our players and coaches will stand and honor our flag while the national anthem is played."

Rapinoe told ESPN after the game that she went with her heart and "what I knew was right all along."

Rapinoe first knelt during the anthem prior to a Sept. 4 game involving the Seattle Reign, her National Women's Soccer League team. In her next NWSL game with Seattle on Sept. 7, the Washington Spirit played the anthem before players took the field to prevent a repeat protest.

Most recently, Rapinoe chose to stand and link arms with teammates during the anthem prior to a game on the anniversary of the 9/11 terrorist attacks, in what she indicated was a nod to the sensitivity of the occasion.

Rapinoe, who helped the U.S. win the World Cup last year and played in the Rio Olympics, entered Thursday's match at the start of the second half.

"We need to look at all the things the flag and the anthem represent and all the things it means, and is it protecting everybody?" Rapinoe said. "There are people who don't feel as protected as I do every day. I know it's a time-honored tradition. Especially in a sports environment, it's something the country is very passionate about, but there is a bigger conversation here that is more important than sports."

As recently as a day before the game against Thailand, the first for the U.S. since the Olympics and since Kaepernick's protests came to national attention, Rapinoe said she wasn't sure whether she would take a knee.

But after standing alongside other non-starters during the playing of Thailand's anthem Thursday night at Mapfre Stadium in Ohio's capital, Rapinoe knelt to the ground during the American anthem, sung by an Air Force servicewoman. No players joined her, although all remained close by on either side. Moments before the anthem, teammate Meghan Klingenberg hugged Rapinoe.

There was little discernible reaction, positive or negative, from the crowd.

"Ultimately I would like to be involved in any way I can and be an ally and use my platform or use the resources I have to shed light on the issues and then go past that. It's really not about having just one conversation. It really is about the next step and what can we do to sort of break down some of these prejudices and some of these injustices that are happening and really move forward."

U.S. coach Jill Ellis said that while she supported Rapinoe's activism, she felt it was the expectation of a national team player to stand for the anthem.

"It was one of those things that you don't know until you know, [that] kind of thing, in terms of what happened," Ellis said. "I think for me and who I am, I've given this a lot of thought and a lot of contemplation. And I think tonight I was not going to get caught up in an emotional response in the moment. I'm pretty measured in everything I do, and certainly even to the game plan was measured in minutes and that was factored in, including Megan. I think that's just how I am. Now it's continued conversations and thoughts on my part and probably with the federation."

Ellis said she had discussed the situation with Rapinoe.

"It was important for me to express how I felt and important for me to listen as well," Ellis said. "I was very clear in what I expected and needed. Everything for me, from the day I took over this job, it's about the team. And if something supersedes the team, that's where I get concerned. And I think that's something I have to reflect on now at this point."

The substitute role for Rapinoe against Thailand was not a surprise. The midfielder hasn't started for the national team since tearing an ACL in December, and one of the starting places she might otherwise have contended for was occupied by Heather O'Reilly in the veteran's final international game.

O'Reilly saidRapinoe had talked to the team about her decision.

"And we know, obviously, why she is doing that," O'Reilly said. "Because she loves this country and she wants to see change, and that's how she feels, in her heart, that she's demonstrating it."

Rapinoe played a part in one of the most iconic on-field moments in the history of the women's national team, delivering the cross that Abby Wambach headed for a late tying goal during an Olympic quarterfinal against Brazil in 2012.

But the 31-year-old has been equally visible in using the platform of the national team to address off-field issues. A longtime advocate for LGBT rights, she also is one of five players named in an equal-pay complaint filed against U.S. Soccer and was a vocal critic of the artificial turf used during the 2015 World Cup.

She spoke Wednesday of frustration, saying the "medium" of protests has been debated more than the social issues that Kaepernick first cited as the root cause of those protests. Rapinoe reiterated concerns about both police violence against minority communities and the challenges faced by police. Not long after she spoke at Mapfre Stadium, a police shooting occurred a little more than 4 miles away.

The mayor of Columbus and other officials asked the public for patience Thursday as they addressed the overnight shooting death of a 13-year-old African-American boy. Officials said the boy, Tyree King, was shot and killed by an officer after King pulled what appeared to be a firearm out of his waistband when pursued in connection with an armed robbery minutes earlier. The weapon turned out to be what was described as a realistic-looking BB gun.

It is unclear what, if any, role the incident played in Rapinoe's decision to follow through on her protest during the national anthem, although she retweeted journalist and Black Lives Matter activist Shaun King, who connected the shooting with the death of 12-year-old Tamir Rice, who was playing with a pellet gun when he was fatally shot by Cleveland police in 2014.

The U.S. women's national team next plays Sunday in Atlanta against the Netherlands.