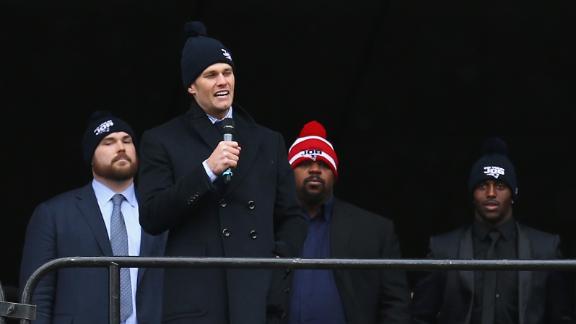 The Super Bowl point spread is holding steady at New England minus-1, even as money continues to pile up on the Patriots in Las Vegas.

Four times more money had been bet on New England than the underdog Seattle Seahawks as of Monday at sportsbook operator CG Technology. That includes two six-figure wagers on the Patriots that came from sophisticated players, according to CG Technology vice president of risk Jason Simbal.

"My guess is that the smarter customers are envisioning that number goes even higher, which is why they wanted to bet it as early as possible," Simbal said.

New England is listed as a 1-point favorite at almost all Vegas sportsbooks. The Wynn bumped up its line to Patriots minus-1.5 over the weekend, but it was the first and only Vegas book to get that high as game week began.

The action was more even at the MGM, with only slightly more money having been bet on the Patriots.

The MGM had taken two six-figure bets, one on each team, as of Monday morning. Assistant manager Jeff Stoneback said more than $1 million has already been wagered on the game at the MGM.

The Westgate SuperBook reported having two times more money on the Patriots than the Seahawks. The SuperBook had not received any limit bets to this point, according to assistant manager Jeff Sherman.

Caesars said it had received public money on the Patriots but hadn't taken any big bets to this point.

"Maybe the bettors that like the Seahawks are waiting for the number to get higher before they start coming in with their cash," said David Pemberton, director of specialty games for Caesars Entertainment.

Marc Nelson, sportsbook director at the Aliante, said he had received far more bets on the Patriots but that the total money wagered was pretty even.

"Nearly all the money on Seattle came on two wagers, which were both limit plays from first-time players at Aliante," Nelson said.

Limits vary from book to book and bettor to bettor.

In addition to the Patriots, the under and "heads" were popular bets in Vegas.

Stoneback said professional players at the MGM placed four limit bets on the under, when it was at 49.5.

The total was sitting at 48 at most shops as of Monday. Stoneback said pros had taken the under in the first, second and fourth quarters.

In Super Bowl coin-flip betting at the SuperBook, Sherman said there was four times more money on "heads" than "tails."

Offshore, the Super Bowl point spread was listed at pick 'em at multiple prominent sportsbooks. The line opened with Seattle as a 2.5-point favorite at most books on Championship Sunday, but New England quickly assumed the role as favorite.