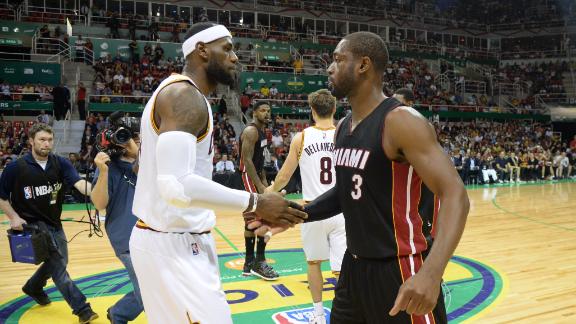 MIAMI -- Dwyane Wade understands why fans were upset with LeBron James for abandoning the Heat in free agency but believes that the four-time league MVP should be met with gratitude when he returns Thursday with the Cleveland Cavaliers.

The Christmas Day showdown between the Cavaliers and Heat will mark the first time James returns to AmericanAirlines Arena since he opted out of his contract last season to rejoin the Cavaliers.

"It's going to be a mixture," Wade said of how he anticipates fans will respond to James. "How I think he should be received is a little bit different. The man helped take us to places we've only been once before he got here. So I think he should be received very well for that at the start of the game. And then, when the game [starts], then do what you've got to do."

The Heat plan to show a video tribute that highlights James' contributions to the most successful four-year run in franchise history. With James leading the way, the Heat became the first team in 30 years to make four consecutive trips to the NBA Finals. Miami won back-to-back titles in 2012 and 2013, with James winning regular-season and Finals MVP honors both seasons.

Despite their awkward breakup as teammates, James and Wade said their friendship is stronger than it's ever been entering Thursday's game. James' departure altered the course of both franchises for the second time in four years. When he left Cleveland in 2010 as a free agent to join Miami, the Cavaliers went from contending for conference and NBA titles to struggling to rebuild through the draft lottery.

James' decision to go back to Cleveland in July after leading Miami to two titles has affected the Heat, who also have endured a slew of injuries amid their worst start in seven seasons. After the Heat suffered a lopsided series loss to San Antonio in the Finals, several Miami players said the four-year run had been an enormous grind on the team and there was little fun along the way.

Wade said he gradually sensed this past summer that James felt a change was needed. James announced on July 11 that he was leaving Miami to return to Cleveland. James told ESPN.com that he and Wade set aside their roles as teammates to help each other during a difficult process.

"Our relationship is so strong, man, that when I decided to make my decision to come back here, [Wade] was one of my biggest supporters," James said. "Obviously, he wanted me to stay and he was a big reason why I was teetering back and forth, because it's bigger than basketball with me and him. It's like a friendship I can't explain. It's like a brother that I never had."

Wade said Miami's struggle to regroup after the departure hasn't placed any strain on his relationship with James. Both players said they speak frequently either on the phone or through text messages after games as part of a bond that will carry them beyond basketball.

"At the end of the day, this is a sport. And I would personally never let a sport come between the relationships I develop," Wade said of James. "That's just not the person I am. So LeBron's decision to go home didn't affect our relationship at [any] point. We might even talk more now than we did the first time when he wasn't my teammate. It's just because we're used to leaning on each other a little bit."

Wade Hopes For Positive Reception For LeBron
ESPN.com NBA reporter Michael Wallace discusses the relationship between LeBron James and Dwyane Wade since LeBron left Miami to return to Cleveland, and how the fans in South Beach will react to LeBron's return to AmericanAirlines Arena on Christmas Day.