Warriors, Cavs to play on Christmas as NBA reveals 2016-17 schedule 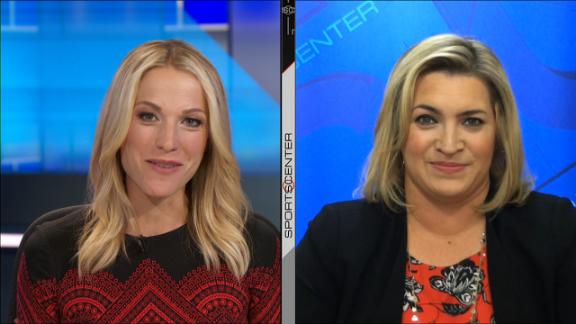 An NBA Finals rematch between the Cleveland Cavaliers and Golden State Warriors is the centerpiece of the five-game Christmas Day slate as the league revealed its schedule for the 2016-17 season on Thursday.

It's the second consecutive year the teams will meet on Christmas. This time, however, the champion Cavaliers will host at 2:30 p.m. ET on ABC. The second game of the ABC doubleheader is the Chicago Bulls visiting the San Antonio Spurs at 5 p.m.

The day will start off with the Boston Celtics playing in Madison Square Garden against the new-look New York Knicks at noon on ESPN. The Minnesota Timberwolves and their young core of Karl-Anthony Towns and Andrew Wiggins will make their Christmas debut atOklahoma Cityat 7 p.m. As has become tradition, the Los Angeles Lakers will play theLA Clippersin the late game.

The season will open on Oct. 25 as the Knicks will visit the Cavs on ring and banner night. It will be followed as West powers San Antonio and Golden State square off.

On the second night of the season, ESPN will televise No. 1 overall pick Ben Simmons' first game as the Philadelphia 76ers host the Thunder. Then No. 2 Brandon Ingram will play his first game for the Lakers against the Houston Rockets in L.A.

Kevin Durant will make his return to Oklahoma City with the Warriors on Feb. 11 as part of ABC's Saturday Primetime. Dwyane Wade will make his only return toMiamiwith the Bulls early in the season (Nov. 10). The Knicks'Derrick Rose makes his return to Chicago on Nov. 4 in a game on ESPN.

The Warriors will host the Cavs on Martin Luther King Day (Jan. 16) at 8 p.m. ET. That will be followed by the Thunder visiting the Clippers -- the first of 10 new Monday doubleheaders on TNT in addition to their traditional 20 Thursday doubleheaders.

As part of an NBA trend over the past several years, the league took steps to reduce the amount of back-to-back games for teams and four-game-in-five-day sets. Four-in-fives have been reduced by 26 percent from last season and no team will have more than one this season; the max per team last season was two.