Which player had the best sneakers in the NBA during Week 13? 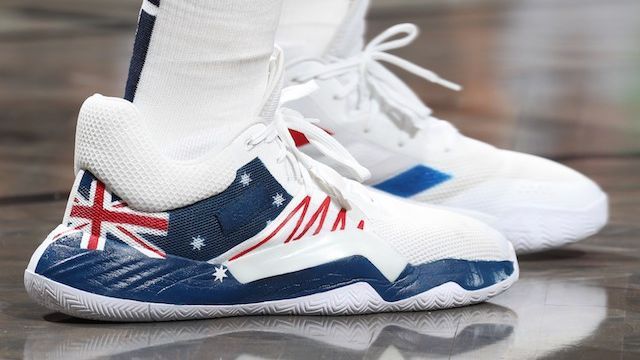 As one of the league's leading pregame and postgame sneaker philanthropists, known for giving away his kicks to young fans in every arena, Utah Jazz star Donovan Mitchell took yet another step in utilizing his footwear for a bigger cause.

"I saw what happened in Australia and in Puerto Rico, and I just wanted to put the flags on my shoes," Mitchell said. "[Adidas] made it happen in 10 days."

After reading nonstop reports about the devastation of earthquakes in Puerto Rico and bush fires throughout Australia, Mitchell reached out to his Adidas rep Jordan Lichty to see what could be done in the short term. He felt he had to do something, and now plans to sign and auction off each shoe, with the proceeds benefiting support efforts in both regions.

"I just want to do my part," he told reporters after the game. "I wanted to be able to find a way to make an impact."

In less than two weeks, Adidas design manager Todd Stansbury worked up a custom, hand-painted pair of Mitchell's D.O.N. Issue #1 signature shoe, complete with the red, white and blue flags of each country atop each size 16 shoe.

Mitchell was a part of the Team USA group that toured through the region in late August for two exhibition games against Australia, in the lead-up to the 2019 FIBA World Cup. "Having Joe [Ingles] on my team, and being down there in the summer, I do have a fond love for Australia," he said.

In addition to supporting efforts to combat the bush fires that have decimated thousands of homes and millions of acres throughout Australia, Mitchell also wanted to lend his hand in helping the Caribbean island facing widespread power outages in the aftermath of an ongoing string of powerful earthquakes.

"I've been to Puerto Rico and have Puerto Rican friends," Mitchell said. "For me, it was just showing love in any way I can. Being able to give back, I think that's huge. People in my position are just trying to find ways to make an impact in any way possible."

Since joining the Jazz in 2017, Mitchell has grown close with Ingels, one of the most visible Aussies leaguewide. The quirky sharpshooter has also been active in raising funds for his native country, and along with the NBPA Foundation and eight other fellow Australians, includingBen Simmons and Patty Mills, the group has donated $750,000 to the efforts. The Jazz are urging fans to make additional donations to Australia through its NBA Cares portal.

As he continues his All-Star-level play for the 27-14 Boston Celtics, power forward Jayson Tatum unveiled yet another player exclusive of the new Air Jordan 34. Styled in black and royal blue, the sleek digital camouflage design honors his time at Duke, highlighting "The Brotherhood" along the heel panel. It was only right that Tatum dropped a career-high 41 points during his first time wearing the special edition shoes.

"I think the big part is everybody played for Coach [Mike Krzyzewski], and that's what brings us all together," Tatum has said about the bond of The Brotherhood. "Even guys that played before I was born. The love and support that we all have for each other, no matter when we played, just shows how much The Brotherhood impacted all of us."

Fellow Blue Devil one-and-done star Zion Williamson of the New Orleans Pelicans was also spotted in "The Brotherhood" 34s earlier this week, as he continues to work his way back during pregame court drills before what is expected to be his highly anticipated regular-season debut game Wednesday.

"We had to show love," Tatum wrote in Instagram poast, before adding the fire emoji.

On Monday evening, Baton Rouge native Langston Galloway of the Detroit Pistons timed his latest custom pair of his Q4 Sports LG9 sneaker perfectly, as he worked yet again with custom artist Andrew Lewis on a Tiger-striped themed pair in tandem with LSU's national championship game.

"The shoes came out perfect from what we talked about," Galloway said. "I really wanted to showcase Mike the Tiger."

"I had two tickets to the game already bought, so my wife ended up going to the game," he said. "I was sick that she could go and I couldn't."

Though Galloway attended Philadelphia-area school Saint Joseph's for his collegiate basketball career, he still holds that hometown pride for all of LSU's accomplishments and looks to highlight the school whenever he can.

"It's a changing of the guards. I feel like I'm in the SEC," he said of his latest pair.

Houston Rockets power forward PJ Tucker has rarely gone the custom-painted route, though he still managed to catch Kevin Durant by surprise with yet another colorful, themed recent pair. Originally designed by one of the founding members of the Taiwanese sneaker message board Kenlu.net, the "Orange Tree" KD IV was a creation on NIKEiD with just a handful of pairs made. Tucker somehow got his hands on a pair nearly eight years later, of course.

"We've been friends for years and I've always loved his sneakers," Tucker said of Durant. "Our friendship is deeper than anything, but the sneaker aspect is unbelievable."

"Dog I'm about to ban you from wearing my shoes," Durant joked on Instagram. "They might as well be your joints now."

Tucker's current stash now includes dozens of pairs of the KD IVs, with several original samples and player exclusives still yet to be unveiled.

While interning at the New Balance headquarters in Boston during what would have been a one-and-done collegiate season a year ago, Oklahoma City Thunder rookie power forward Darius Bazley worked with the brand's designers to create a series of colorways atop its lifestyle and basketball sneakers. His first high-top OMN1S design celebrated his youthfulness among the select New Balance roster of athletes, with vivid neon green and yellow hues inspired by "The Fresh Prince."

This week, he debuted the brand's new low-top edition of its first basketball model in a decade, in similarly loud neon, pink and baby blue accents. His "DB" initial logo could be seen along the tongue tab, while "FRESHNESS" lettering across the shoe's mid-foot band rounded out the theme.

Though he hasn't shown a huge willingness to wear wild colors during his time in Boston, Gordon Hayward made an exception earlier this week, as his three young daughters worked together to splash a variety of paints atop a white pair of his Anta GH1 signature shoe. With blue, orange, yellow and magenta bursts throughout, you can look for the Celtics' forward to continue wearing his pair painted by young Charlie, Bernie and Nora Mae Hayward.