Which rotation is baseball's best, Nationals or Mets? 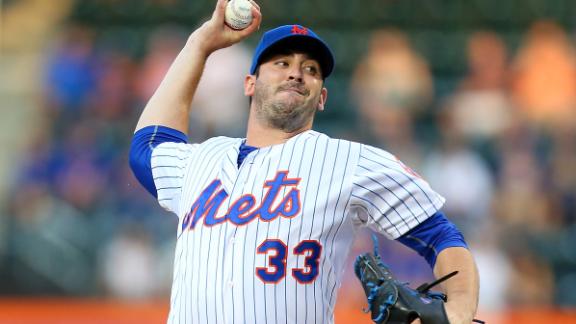 It was just four months ago, on the eve of Opening Day, that a dope who looks a lot like me wrote these words about the sure-to-be-awesome rotation of the Washington Nationals:

Uh-oh. The 1971 Orioles? The 1986 Mets? The 2011 Phillies? I think that means I was comparing these guys to the greatest rotations of modern times. Oops.

"And now," one longtime National League scout said to me, laughing, the other day, "they're not even the best in their own division."

Right. So I'd like to thank the New York Mets for turning that brilliant April assessment into another of my patented clairvoyant disasters -- in a mere four months. What I obviously meant to say back in April was that the Nationals would have baseball's best rotation ... until the season actually started. And by Aug. 1, we'd all be wondering whether it was really the Mets who might turn out to have the greatest rotation of modern times. Yeah, that's what I meant.

But just to make sure I'm not just imagining how quickly the Mets have passed the Nationals by, I enlisted the help of four veteran scouts who see both of these teams a lot.

I posed two questions: First, which of these rotations would you take right now? And second, which one would you buy stock in for the long haul, factoring in farm systems and free agency?

One scout grabbed ahold of both questions, rolled them into one big ball and expressed total disbelief that I was even asking this, in all seriousness.

"Are you kidding me?" he gulped. "I wouldn't even compare them, with all due respect to the experience factor in Washington. I don't see how anyone could say, even on paper, that the Nationals have a better staff. And you can throw a healthy [Stephen] Strasburg and [onrushing phenom Lucas] Giolito in there, and I'd still say the Mets."

I wouldn't say his cohorts were quite that emphatic. But it was close.

We'll get into how these astute scouting minds view each of these staffs in a moment. But first, some numbers for your perusal, comparing these two rotations:

Now before we go on, I don't want to imply that the Nationals' rotation is out there serving up a bunch of meatballs every night. You could easily win a World Series with their group, too. If you concluded otherwise, you're missing the point of this.

"You realize what you're doing is an exercise in the absurd," another scout said. "If the name of the game is pitching and the name of the game, especially, is young, controllable pitching, you're talking about two clubs that have more of it than most divisions do."

Right. Good point. And we'd like to thank him sincerely for putting that into perspective. We'd also like to mention to Cardinals fans and Dodgers fans that we have in fact noticed that those two rotations actually have better numbers in quite a few of these categories than either the Mets or Nationals. But more on those two staffs next week. We promise. Got it? Now on with our show.

Ranking the Mets
This is the portion of these festivities where we attach a number grade to each of these starters, present and future. You should know that one of the four scouts surveyed wouldn't call any of the Mets a true No. 1 starter because none of them has done it long enough. But here's the average for the entire crew, including the injured Zack Wheeler and Steven Matz. We're excluding Bartolo Colonbecause he basically defies all traditional categorization.

So those are the grades -- basically three No. 1 starters, two No. 2s and a No. 4. But Matz and Wheeler both got billed by at least one scout as future No. 1s. So do that math. Now here is how those scouts justified those rankings:

Harvey: "Has the stuff and nastiness to be dominating. ... He's got that game face. He's got that edge. I can't believe how well he's throwing coming off Tommy John surgery. And he's probably still 10 to 15 percent away from where he's going to be."

deGrom: "At this point, he's the best pitcher they have. I like him more than Harvey. ... He was already extremely athletic and able to execute pitches. But you can see he's become more confident. His velocity is creeping up. And he's gotten even better."

Syndergaard: "The way he's thrown lately, he's the most nasty of all of them. He dominates you with that country hardball. And he's learning to use his breaking balls. ... I haven't seen the feel for the changeup. So for me, he's a 2. I've heard people say they'd put him ahead of Harvey. But for me, he's the third guy on their list."

Niese: "He's not in the group with those other guys. But they may need him to fit in the middle of that rotation, to screw up the hitters' timing."

Matz: "He might be a tick behind those other guys, but not that far. He doesn't get it up to 98 or 99, but he sits in the mid-90s with a nasty breaking ball. He fits right in with that group."

Wheeler: "I always thought he'd be A.J. Burnett at his best, with that long, fluid delivery and then boom -- that explosive stuff. But what goes with it is, he's up at times and he doesn't give you that consistent ability to command the ball."

As dazzling as those reviews may be individually, though, it's seeing all these future aces together, wearing the same uniform, that sets them apart from, well, everybody.

"You watch Harvey pitch, and you say, 'Boy, I'd love to have that guy,'" said one scout who just watched this rotation do its thing. "Then you see deGrom the next night, and it gets better. And then you see the freak [Syndergaard], and you say, 'Oh my God.' When do you ever see all those No. 1s back-to-back like that?"

Ranking the Nationals
OK, you've seen how this works. Now here's how the same scouts graded the Nationals. We didn't include another potential top-of-the-rotation starter, Reynaldo Lopez, because he's still toiling in Class A. But get back to us in a year on him.

Giolito, of course, is only a projection, based on about 200 minor league innings and two starts above Class A ball. And Roark's grades are based more on his work as a starter last season than his bullpen work this year. But with that preamble out of the way, here are the reviews:

Strasburg: "Makeup is a big part of being a No. 1. Harvey's got it. DeGrom's got it. With Strasburg, something's missing. ... A guy who's a true No. 1 just refuses to lose. I've seen too much with Strasburg of looking into the dugout, or 'My lat hurts,' or something. It's not about stuff. Strasburg's got the best stuff. But there's a difference between his will to win and Scherzer's."

Gonzalez: "He's a No. 3 who pitches like a 2 at times and pitches like a 4 a lot. ... A couple of years ago, I thought he pitched himself into a 2, but he's slipped back. He just makes too many mistakes."

Fister: "I think he's a fourth starter who's pitching like he's still hurt. He used to have nice separation between his two-seamer and four-seamer, and cutter and changeup. Now they seem to all run together."

Roark: "Right now, he's pitching badly in that swing-man role. He's kind of lost his effectiveness. But he'd be our No. 1. Put it that way."

Giolito: "He's a No. 1 from a physical standpoint. I'd never call him that until I watch him in the [big league] arena. But he's a front-end guy. He's filthy. A lot like Syndergaard."

Please remind yourself again that any rotation with this many pitchers graded at No. 3 and up is way better than the staff that most teams run out there. But four months ago, I don't recall anyone gushing, "Look how many No. 3 starters the Nationals have."

"Going into the season," one scout said, "we looked at it and said that if they all perform to their best, they had a chance to have three No. 1s, a No. 2 and a No. 3. But it turned out one of them [Scherzer] lived up to his billing. And the other four let them down."

Great today, better tomorrow
So which of these rotations would these four scouts take right now? I think that's clear. And which would they buy stock in over the long haul? I think that's even clearer: It ain't the team we were comparing four months ago to the storied rotations of yesteryear.

"How can you not buy stock in the Mets?" one scout asked. "They've got more top-of-the-rotation starters now -- and they're not going anywhere. If they all stay healthy, they're going to have three years of having all five guys in their rotation be so good that the LOWEST grade you could give them is a No. 2 starter. You know how many clubs are using a No. 3 as their No. 1? And the Mets will have five who are better than that."

I asked another scout in the group whether he'd ever sent in a report on any rotation that matched his grades on this one (with Matz and Wheeler) -- four No. 1 starters and a No. 2.

The only rotation these scouts could compare this one to was the 1993 Braves, when Steve Avery was at his best, John Smoltz and Tom Glavine were stars and Greg Maddux joined the band. No one in that rotation was older than 27. But even that awesome ensemble wasn't made up of five guys who blow smoke at 96 mph and upward.

"These are all shutdown guys who can deflate you, who can put your whole team in a slump," an AL scout said. "And the really bad thing for the hitter is, you know you're getting the same thing tomorrow. I can't think of a group like this. And I've seen them since Double-A. I respect what those Washington pitchers have done, but this is a special group.

"You know what the biggest question is?" the same scout then quipped. "How are the Wilpons ever going to pay these guys?"