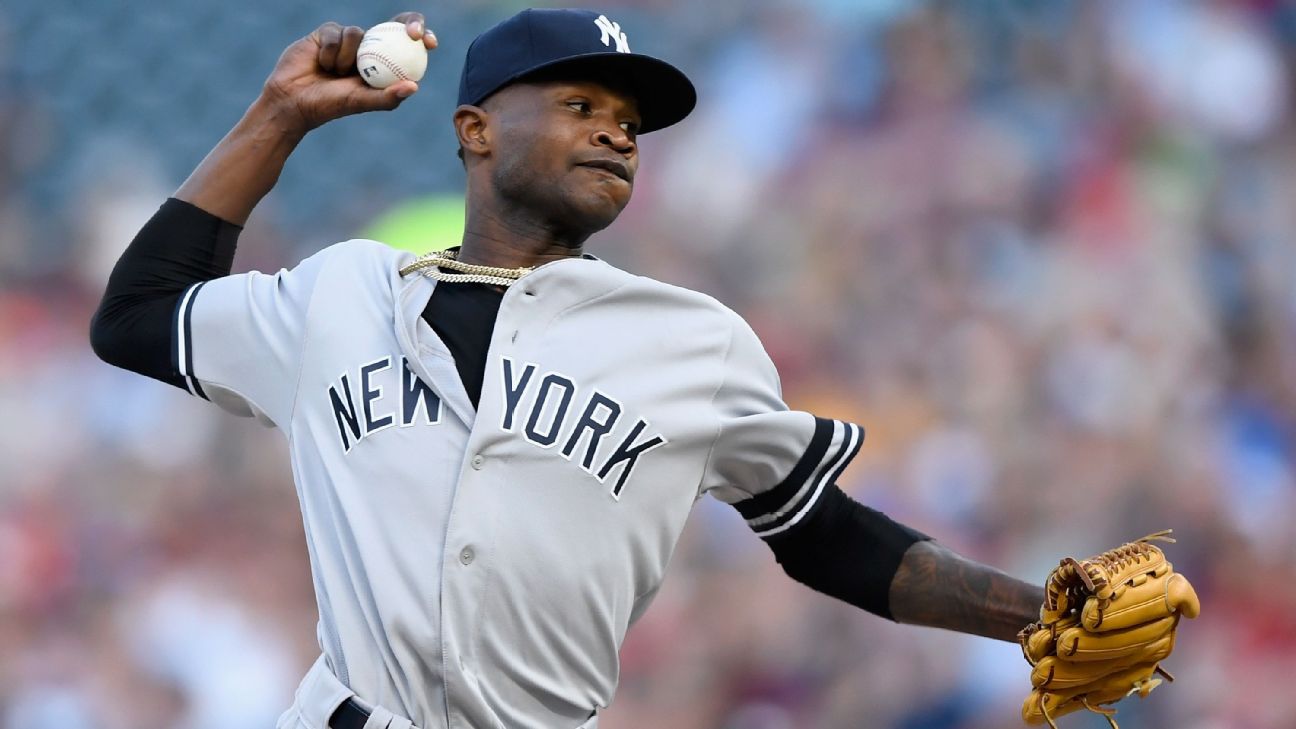 DETROIT -- In a season of unlikely heroes, the injury-ravaged New York Yankees arguably haven't had a more surprising contributor than pitcher Domingo German.

When ace right-hander Luis Severino was lost to a right rotator cuff injury this spring, the Yankees called on German to supply some innings at the back end of the rotation.

He has done a lot more than that.

The 27-year-old's emergence has helped mitigate the underperformance of the veterans in the Yankees' rotation. German, who is 17-4 with a 4.21 ERA, has been by far the team's most reliable starter all season. But in October, when wins matter most, the Yankees say they will be creative with his usage.

"I view Domingo playing a really big role for us in the postseason, hopefully," Yankees manager Aaron Boone said. "There's a number of different roles he could fill. I can very easily see him starting games. I can see him coming in for an inning in a big spot. I can see him giving us length out of the pen."

For his part, German says he feels comfortable doing whatever is best for the team, and he believes any extra rest he gets now will help keep his arm fresh ahead of what he hopes will be a deep playoff run.

"The team talked to me about it and I agreed. For me, there is no problem," he said. "I will pitch in whatever role they put me in when they make their decisions. I think it's a good idea to get a little rest as I think more about preparing for the postseason."

Boone has said that those decisions will remain fluid until the end of the regular season. The Yankees also still have to see if Severino or rehabbing reliever Dellin Betances will be in the mix.

Regardless, the Yankees must make sure German doesn't overextend himself. German pitched just 94 innings last season between the majors and minors after pitching 125 in 2017. He enters Thursday at 136. The team's first foray has been to use German in a long-relief role, as they were planning to do Wednesday night, following starterCC Sabathia.

Wednesday's game at Comerica Park was postponed due to inclement weather, and German will assume the same role after Sabathia in Game 2 of a doubleheader Thursday.

"[We're] trying to manage that workload here down the stretch in a role that he's familiar with," Boone said. "He's pitched in this kind of role before. He's been so important for us this year. He's in the midst of having a great year, and we think obviously he's going to be very valuable if we get to the postseason."

German, who was acquired in 2014 in the Nathan Eovaldi trade with the Miami Marlins, has been one of numerous Yankees to step up for a team that has seen an unprecedented 30 players head to the injured list. Entering this season, he'd only made 28 big league appearances -- half of them in relief.

"With all the injuries we've had this year, it's been huge for us," said right-hander Masahiro Tanaka, who has posted a 10-8 record and 4.53 ERA in a season plagued by inconsistency. "Domingo has been outstanding. I think he's made good adjustments and he really put some thought into how to go about pitching on the mound and it's working well for him, which is allowing him to have a spectacular season this year."

"I think you look at the fact [that] we lost Severino for a lot of the year and for Domingo to come and step in -- those are big shoes to fill," veteran lefty J.A. Happ said. "I don't think he was intentionally trying to fill them, but you take a step back and you look at what he's done for us, he's been remarkable. Among many people that have come in and stepped up, he's been right up there with all of them."

In terms of adjustments, German didn't make any dramatic ones. During the spring, he worked with pitching coach Larry Rothschild on his pitch selection and command, fine-tuning his fastball and developing an effective curveball to help him feel more comfortable in crucial situations.

For German, the biggest change has been trusting his own abilities.

"I have always believed in myself, but I think what has made a change this year has been my approach. I know that I have good pitches but now I don't worry about them, I just release them and expect them to do what they're supposed to do," German said. "Now I am more focused and I have more concentration and I trust that I can execute every one of my pitches. I trust that I can throw a changeup on a 3-0 count. I don't doubt that the pitch will do what it needs to. My mentality is to execute the pitch and I am 100% sure I will."

That increased level of confidence didn't come easily for the right-hander, who believes that undergoing Tommy John surgery at age 22 was a blessing in disguise.

"[The surgery] was really hard, mentally and physically. I was afraid that I would never go back to being the pitcher I was before. It's not easy to experience that so young, and to think that it happened to me in a year that I could've made my major league debut," German said.

"I had to constantly tell myself to hold my head up and that I would come out the other side stronger than before. But the injury helped me to think. It helped me more in my maturity and I think it helped me become a better pitcher because of the maturity and focus I needed. Now I work hard every day to not lose the confidence that I have."

With another twist looming for him in the playoffs, he's certainly earned the confidence of his more seasoned teammates.

"It's been great just watching him being able to throw all his pitches for strikes, his curveball for strikes. His changeup is really good and his fastball, he commands both sides of the plate. Once I saw that, I thought he was going to have a chance to have a good year," Sabathia said.