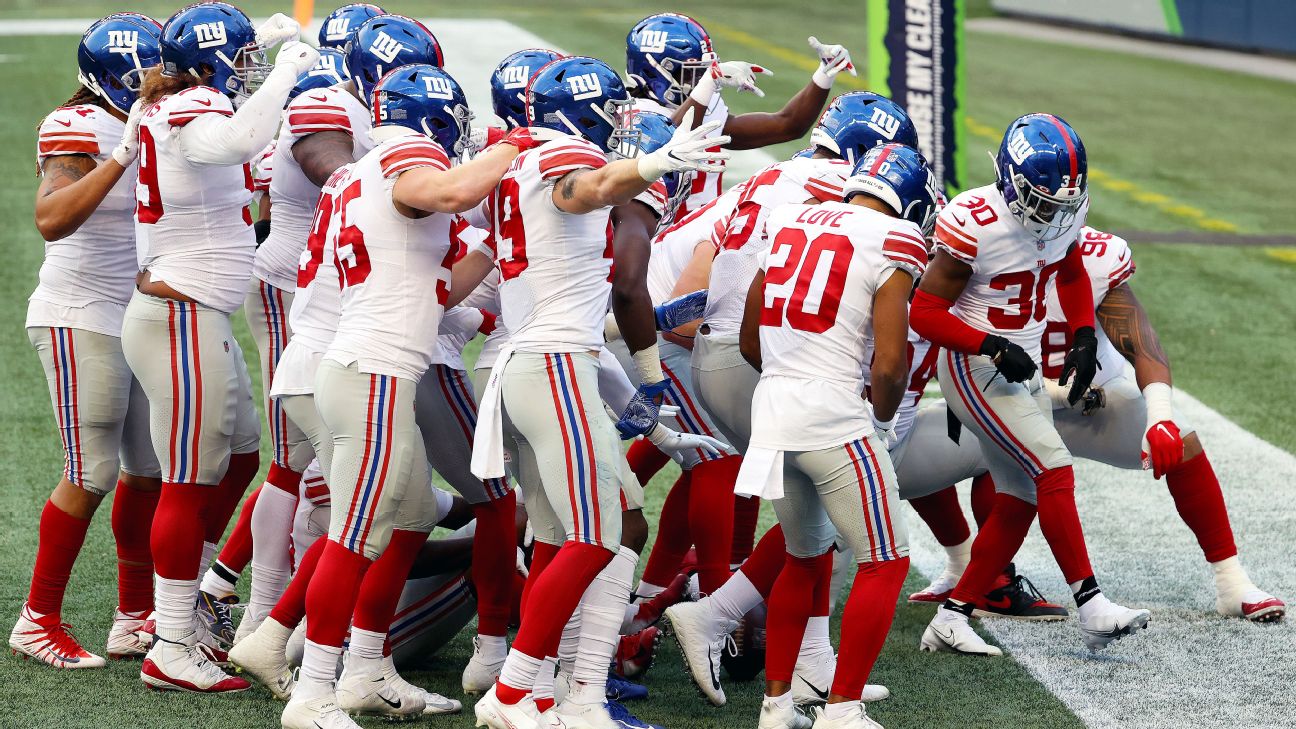 The NFC East race will be decided by the teams everyone predicted would be there in the end: the New York Giants and the Washington Football Team. And by everyone, we mean no one.

But during the 2020 NFL season, the unpredictable keeps happening, so the division will be won by one of these two franchises, which combined for seven wins last season. That number also represents their current combined winning streak, which is why they have muscled past the Philadelphia Eagles and Dallas Cowboys -- the preseason favorites.


Technically, those teams remain alive. Good luck making a case for them to win, however. They both have three wins and are on a combined six-game losing streak. Dallas lost quarterback Dak Prescott; Philadelphia just benched Carson Wentz.

With the stretch run upon us and the division still jumbled, NFC East reporters Todd Archer (Cowboys), Tim McManus (Eagles), Jordan Raanan (Giants) and John Keim (Washington) break down what's coming for each team in the final quarter of the season.

Who should be the favorite and why: How can it be anybody but the Giants? They swept Washington, have the edge on Philadelphia and close the season with Dallas. And they have won four in a row. Before they get to the Cowboys, they have to play Arizona (6-6), Cleveland (9-3) and Baltimore (7-5), but winning in Week 13 in Seattle should have given them a boost of confidence.

Biggest roadblock for the Cowboys: Themselves. Oh, am I supposed to name an opponent? Well, pick any of the four remaining -- even listless Cincinnati and lifeless Philadelphia. But the Cowboys are their own worst enemy. They have turned the ball over in all but two games and are minus-92 in points-off-turnovers margin. They don't stop the run (see Baltimore, 294 yards). They don't gain a schematic or tactical edge from coaching. In the past, they have been talented enough to overcome such issues. Not this season.

Near misses that will hauntthe Cowboys: Not kicking the field goal when down three points in the fourth quarter of the season-opening loss to the Los Angeles Rams, not having functional quarterback play at Philadelphia, and not holding on to the ball against Pittsburgh. But the Cowboys have done things all season that bad teams do, so they won't have anybody to blame but themselves.

Handicap the Cowboys' chances: At winning the division? If we want to quote "Animal House" -- 0.0. Maybe they get one more win, like Sunday at Cincinnati. Perhaps a second since the Eagles and San Francisco are struggling, too. But will it matter? This team would benefit more from a top-five draft pick than backing into the playoffs.

Quote: "I wouldn't say slipping away. It's a game-to-game [situation] now. The division is so tight that you can't even think about it slipping away; we're still right there. You've got to have that mindset that you can still compete for it. That's what we're trying to do." -- Cowboys wide receiver Michael Gallup

Who should be the favorite and why? The Giants -- duh! They're the hottest team in the division, having won four straight, and also own that oh-so-important tiebreaker over Washington, courtesy of the season sweep. Sure the schedule is difficult over the next three weeks, but all they really need is to win one of those and then beat Dallas. At that point, Washington would have to get to eight wins to win the division. I don't think so.

Biggest roadblock for the Giants: That schedule. If Arizona gets itself right by Sunday, this is going to be one heck of a stretch. The Browns are just as hot as the Giants, and Baltimore is finally getting all of its players back following a COVID-19 outbreak. The Giants are playing above their talent right now. It's hard to do that every week against quality competition.

Near misses that will haunt the Giants:Oh, Evan Engram. If only the ball hadn't clanked off his fingers late in that first Eagles loss. Just think about where the Giants would be right now. The answer: With the NFC East all but wrapped up. Quarterback Daniel Jones could take his sweet old timecoming back from this hamstring injury with his eyes on the playoffs.

Handicap the Giants' chances: Right now, the House of Raanan would put the Giants at 60% to win the NFC East. Two more wins will get it done. Forget about the Cowboys. They're a bad team. Zero percent. The Eagles are a mess. Rookie quarterback Jalen Hurts isn't saving them. They need a miracle. Put them at 10%. Washington has a shot to make the Alex Smith comeback story a 30 for 30. Hence, 32%.

Quote: "They're a tough group. We ask them to play a physical brand of football and that's helped us have tangible results. ... We've got a tough stretch coming up [and] we're going to have to beat teams with winning records. But we still focus on the same thing: one win at a time and one week at a time" -- Giants coach Joe Judge

Who should be the favorite and why? Washington. That defense is really starting to come on, allowing 14 points per game during the team's current three-game win streak. They are well coached and have a savvy veteran under center in Smith. Between coach Ron Rivera's cancer journey and Smith's amazing comeback from injury, there is a well of inspiration they can draw from down the stretch.

Biggest roadblock for the Eagles: The Eagles' lack of consistency up front -- they have had 11 different starting offensive line combinations in 12 games -- has made life tough on the quarterbacks. Hurts makes his first start Sunday against the No. 1 defense in football, the New Orleans Saints. It will be a tall order to get this mangled offense straightened out over the last quarter of the season.

Near misses that will haunt the Eagles: The Eagles' Week 3 tie with the Cincinnati Bengals was wholly unsatisfying and a sign of the type of season that lies ahead. Eagles coach Doug Pederson went against his normal aggressive tendencies and punted from midfield late in overtime on fourth-and-long, showing a lack of confidence in his offense to get the job done.

Handicap the Eagles' chances: The Eagles sprang to life when Hurts was inserted into the lineup against the Green Bay Packers last week, offering hope they can make a run over the final four games like they did when Nick Foles replaced an injured Wentz in 2018. While there could be an initial jolt, this team has shown no signs of being able to string together quality football over any extended period of time, making it unlikely it'll end up on top.

Quote: "I was looking for a spark from our offense, and a lot of times it comes from putting your quarterback on the bench for the backup. That's all I'm looking for here -- a little spark, a little shot in the arm to kind of pick the offense up." -- Pederson

Who should be the favorite and why? The Giants. Washington has a more favorable schedule, but getting swept by the Giants means it has to finish one game ahead. And that probably means going 3-1 down the stretch. Washington plays three teams with losing records, and it is playing much better -- especially on defense. So it's possible, but difficult.

Biggest roadblock for Washington: If running back Antonio Gibson has to miss time with turf toe, it could be enough to derail Washington. It won without him (mostly) in Pittsburgh, but with 659 yards rushing and 11 touchdowns, he's central to the offense's success.

Near misses that will haunt Washington: In the first game vs. New York, Washington went for a 2-point conversion down 20-19 with 36 seconds left. It failed; a win would have put Washington in a commanding spot. Then, a month later, it tied Detroit with 16 seconds left. Washington was rolling, but a costly unsportsmanlike conduct penalty coupled with a defensive mistake on the ensuing play put Detroit in position to kick a game-winning 59-yard field goal.

Handicap Washington's chances: Excellent. Washington travels to face a wounded San Francisco (5-7) team and plays host to Seattle (8-4), which has lost three of five. It finishes with games at home against Carolina (4-8) and at Philadelphia (3-8-1); the 49ers, Panthers and Eagles are a combined 2-10 over the past four weeks. It's hard to bet against a team that has a coach who has undergone treatment for cancer during the season (and never stepped away) and one of the league's best comeback stories in Smith. Washington has developed a tough, resilient mindset.

Quote: "This is what you hope for, that you get to this point in the season and they're ascending. Players have bought in and are beginning to believe what this group of guys can accomplish." -- Rivera 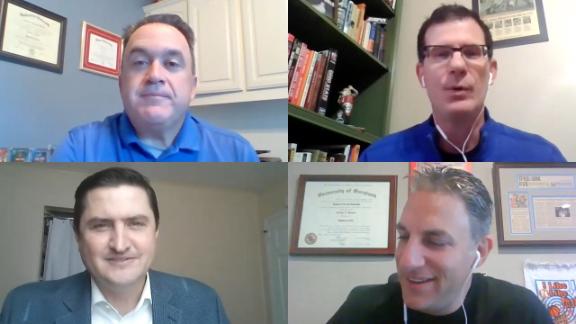 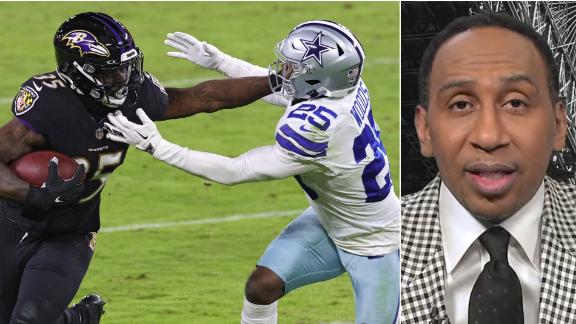 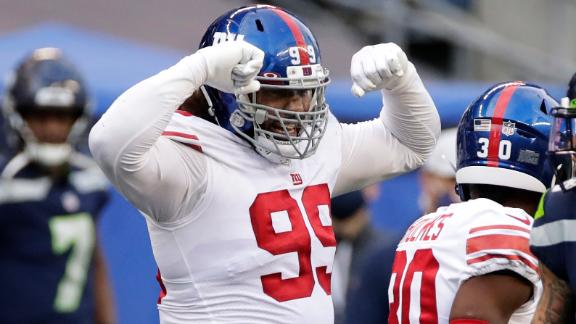 Which NFL team improved its playoff stock?
Mina Kimes explains why the Giants improved their playoff stock with an upset win over the Seahawks. 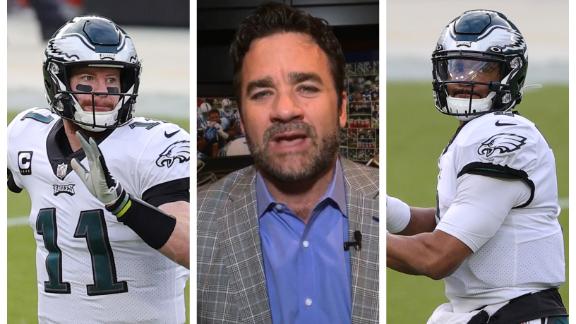 What does Hurts starting mean for Wentz's future with the Eagles?
Jeff Saturday reacts to Doug Pederson's decision to start Jalen Hurts at QB vs. the Saints. 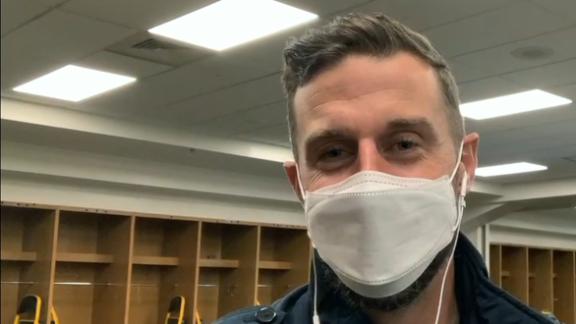