Will Jean Afterman be baseball's first female GM? The sport should be so lucky 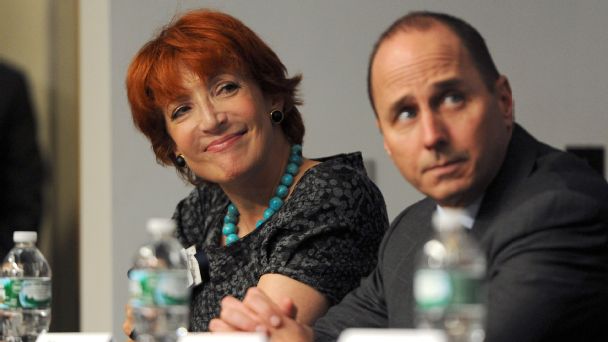 It was a spring day in 1997 and The Boss was demanding to speak with Jean Afterman.

Afterman was the vice president of KDN Sports, a Japanese-owned sports management firm based in San Francisco. She and Don Nomura represented the New York Yankees' Hideki Irabu. Irabu had arrived in the United States hyped as the "Nolan Ryan of Japan." But he wasn't pitching that way.

Afterman and Nomura had transformed baseball by finding a way to bring Japanese stars to the major leagues in their prime, but Steinbrenner wasn't impressed.

Well, at least, not at the moment. He wanted an explanation for why Irabu was struggling. And he wanted an answer from Afterman. Now!

"George ... from ... Steinbrenner is on the phone," a visibly shaken secretary told Afterman, trying to find the right words in her second language.

George from Steinbrenner? To Afterman, it sounded like a furniture company solicitor was calling. After some back and forth, Afterman still wasn't sure who was on the phone, but she picked it up anyway.

"God damn it," The Boss exploded. "I can't believe this guy. I'm going to stick him on the next plane right back to you."

Afterman listened as the knockdown pitch sailed up and in. She never tolerates being spoken to disrespectfully -- not even by someone as legendary as The Boss.

"Seriously, great!" Afterman countered, raising Steinbrenner's ante. "I'm going to be at the f---ing airport. You send him back with his f---ing signing-bonus check and we'll go right to the bank and we'll cash it.

"Make sure he has that f---ing check and I will welcome him with open arms and we'll sign him with another team tomorrow."

"Hmmm, that's not the way you talk," Steinbrenner said.

Afterman reiterated her point, refusing to be bullied.

"Just send him back, give him his signing bonus check and we'll rip up the contract tomorrow and we'll sign him someplace else," she said.

For a decade and a half now, Afterman has been the glue of the franchise, so valued by the organization that she recently signed a three-year contract even though her boss, Cashman, is in the final season of his deal. She's currently the only female executive with the title, making her the highest-ranking woman in any club's front office.

AN ACTRESS AT heart and a lawyer by trade, Afterman, 60, is in on every transaction, making sure the Yankees are following league rules to the letter. Cashman refers to her publicly as his compliance officer and privately as his wartime consigliere.

She's a product of two politically active parents from San Francisco who instilled in her a strong belief system.

"I like to think they taught me there is a right and a wrong, so you have to make your voice heard," Afterman says.

Her late father, Joseph, a child psychoanalyst, was the kind of man who did the right thing even when no one was looking. Jean's older brother, Peter, remembers when a home insurance agent suggested their dad could slip out of paying thousands of dollars on a house claim. It probably could be supported legally, but it didn't sit well ethically. Joseph declined.

Their mom, Marjorie, fed Jean's intellect by putting Elizabeth I in front of her. Her dad added Greek gods and goddesses to the menu. Afterman says it nourished her imagination of all that's possible.

But it worked, at least until the helplessness of tragedy struck her family.

In 1969, Jean's younger brother Eric died of childhood cancer. He was 9.

The mark he made hasn't faded nearly a half-century later. There is a melancholy that pops up sometimes in the family, says Afterman's brother Alex, who is 14 years younger than Jean and never met Eric.

Little reminders jog the soul. It can be a child on a basketball court, sparking a memory of how Eric had an uncanny shooting ability for a young boy.

Eric fought the disease nobly, Afterman says, but he succumbed to it in mere months. From her view, her parents were rocks, when others might have crumbled.

Peter says he grew up faster after Eric's death, diving headfirst into music. He later began his own company and is a two-time Grammy winner as producer of the film soundtracks for "Juno" and "The Apostle."

Jean's emotions poured out in poetry. She lost and found herself in theater.

"At the time, I wanted to be a different person," she says.

When her brother was buried, Afterman was about to become a teenager. The scars of mourning left a resolve.

"I think for the rest of my life that put absolutely everything in perspective," she says. "It doesn't matter what happens in my career. If you break up with a boyfriend, who cares? If a boyfriend breaks up with you, who cares? At least it is not the death of someone you love. I think that is the worst thing that can happen to you in life.

"When we don't win the World Series, I realize it is not appropriate to say, 'Well, nobody died.' But it does put everything in perspective."

IN COLLEGE, BROADWAY was on her mind, not the Bronx. She didn't see herself becoming a lawyer, either. But Afterman had already developed a fearlessness that has made for an eclectic career.

In 1979, she graduated from Cal-Berkeley as an art history major. She ended up an assistant to the head of feature film production at Paramount, where it was suggested she go to law school. She might not have done it except for a trip east to Fire Island with a bunch of friends from college -- and maybe one glass of red wine too many.

"I stood up and said, 'Guess what? I have an announcement to make,'" she says. "'I'm going to go to law school and be a lawyer.' Once I made my drunken announcement, my friends wouldn't let me forget it."

After graduating from the University of San Francisco School of Law, she passed the bar in 1991. But she never stopped acting. She says she would channel a Lady Macbeth line to "make thick my blood," becoming, in her words, a different person. She would escape in the court.

"I paraphrased [Lady Macbeth] to myself to put ice water in my veins," Afterman says.

Afterman went organic before it was hip, and she immediately made inroads. Eventually, the United States Secretary of Agriculture appointed her to the National Organic Standards Board. Those little organic stickers on fruits, vegetables and other foods? Afterman was part of the panel that instituted them.

She ended up representing Nomura in a baseball card dispute, as a side job, then teamed up with him as a sports agent. At that time, Japanese baseball players were forced to wait a decade into their professional careers before coming to the United States.

With echoes of her parents in her head, she thought, "This is not right."

Afterman found the legal loopholes in the American and Japanese agreements, which didn't have the proper language to stop a player from "voluntarily retiring."

"We had to build a case," Afterman says. "It was a matter of finding the Swiss cheese holes in any agreement. It encourages people to drive the Mack truck through it."

Afterman and Nomura did the same for a 20-year-old Alfonso Soriano, helping him escape Nippon Professional Baseball early. Soriano signed with the Yankees in September 1998. Again, they used the rules to their advantage with another "voluntary" retirement. She had caught Cashman's attention.

Three years later, Afterman replaced Kim Ng as the Yankees' assistant GM. Soon after she signed on, she was charged with recruiting another huge Japanese star: "the Michael Jordan of Japan," Hideki Matsui. Steinbrenner gave her a message before she left for Tokyo.

"You go east," Steinbrenner told her. "But if you don't come back with him, you just keep heading east. Don't ever turn around."

The Yankees signed Matsui for three years and $21 million.

TODAY, YANKEES PRESIDENT Randy Levine calls it "inevitable." Cashman says he can't think of a reason why not. Yet there still has never been a female GM.

"I'm kind of disappointed her name never comes up," Nomura says. "I don't know why. It is very disappointing."

Afterman's résumé would certainly qualify her for the job.

Afterman says she has always wanted to remain with the Yankees, and isn't even sure other teams would look at her in that capacity.

Before Afterman and her predecessor, Ng, Elaine Weddington Steward of the Red Sox was baseball's first female assistant GM in the early 1990s. Although Afterman doesn't want a GM job, Ng still does. Ng left the Yankees for the Dodgers in 2001 and is now a senior vice president for baseball operations in the commissioner's office, focusing on international issues.

Ng has interviewed with the Dodgers, Mariners and Angels, and twice with the Padres. She is 0-for-5. Like Afterman, she thinks young women need to know what's possible and she believes MLB needs to bring more women on at the lower levels -- where she says there has been improvement -- to push those possibilities even further.

"I think part of it is young women not necessarily knowing that those opportunities exist," Ng says. "I think that's part of it. I think another part of it is, we probably need to do a little bit better job reaching out and communicating that, and educating young, college kids that those opportunities do exist and really, in my mind, keeping it at the forefront of our minds when we hire."

Afterman is quick to tell people that Cashman and Steinbrenner are the only people in baseball who have hired not one but two female assistant GMs.

"That's Brian, but Brian couldn't do it without George," Afterman says. "For me, that's the point. To me, you can talk about things, but the proof is in the pudding. The front office has been the most diverse in baseball and probably in sports. I think that is also [Steinbrenner's] legacy. I'm just bummed he is not a Hall of Fame owner. But, listen, nobody is a saint. There are a lot of sides to people."

Afterman says she never could have imagined she'd work for the Yankees, but she loves it.

"It is just such an honor to be a Yankee," Afterman says.

Still, there is a house she purchased in the Napa Valley waiting for her. When the daily grind of the job is no longer fun, she plans to return to the West.