Winners and losers of the 2018 NHL draft weekend 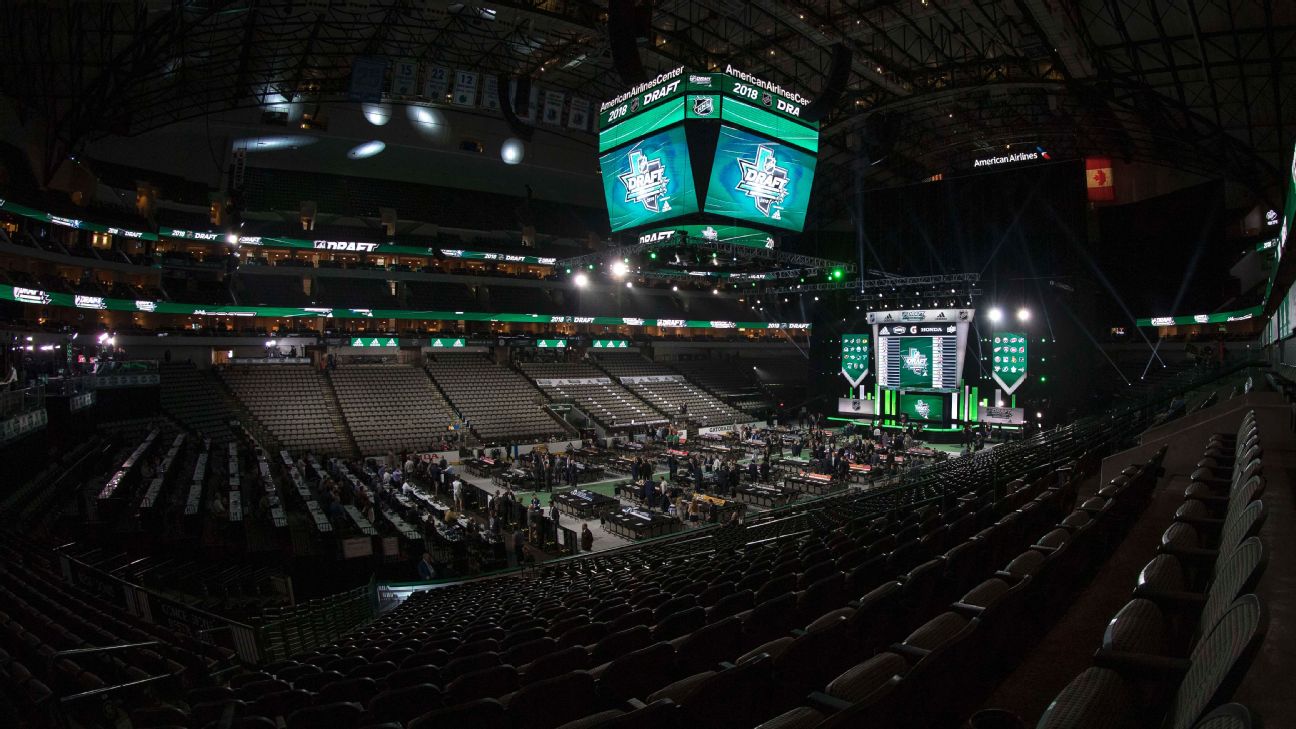 DALLAS -- The 2018 NHL draft was, in comparison to other recent editions, a muted affair.

There were only two major trades made, and few credible rumors to spark speculation. Arguably the biggest move was the NHL return of a player who hasn't been in North America since 2013. Well, that and the most prized free agent of the summer agreeing to listen to other teams' pitches.

The draft itself had a Swedish defenseman, Rasmus Dahlin, selected by the Buffalo Sabres at No. 1 overall, and more "hey, maybes" than sure things among its top prospects.

That said, some teams and individuals leave "Big D" with "Big W's," while others walked off the draft floor taking an "L." Here's a look at the winners and losers at the 2018 NHL draft.

ESPN's Chris Peters gave the New York Islanders an "A" for their remarkable draft class of 2018. That includes the good fortune of having the potentially dynamic scorer Oliver Wahlstrom dropping to No. 11 and then snagging defenseman Noah Dobson at No. 12.

"I don't think we could be more pleased with how it turned out," GM Lou Lamoriello said.

The news came down during the draft that Islanders superstar center John Tavares will field pitches from at least five teams in the next week, before he's scheduled to become an unrestricted free agent on July 1.

That includes two teams with considerable cap space (San Jose, Vegas), his hometown team (Toronto) and the team for which one of his closest friends plays (Tampa Bay).

The odds are still good that Tavares remains with the Islanders, who can give him eight years on a contract and where he's professed a desire to stay to help return the franchise to glory. But that doesn't make this any easier for Islanders fans.

Taking ownership of the incessant, unending booing that occurs whenever he shows up in front of a large group of NHL fans brings out a playfully antagonistic side to the commissioner -- rather than the exasperatingly antagonistic comportment that we usually see.

The NHL draft began Friday night with a solemn tribute to the Humboldt Broncos and the victims of that horrific bus crash earlier this season. Alas, the segment was presented by Bettman, who was welcomed with Pavlovian booing from fans. No one else could have done this segment? Only the guy who always gets booed at first sight at an event like this?

The fans, for what it's worth, calmed down after Bettman asked them to. But seriously, did the NHL not see this coming?

A senior vice president of hockey operations for the league, Gregory has played a large role in the development of the NHL draft since 1979, having also served as director of the NHL Central Scouting Bureau for several years. In 2007, he was elected to the Hockey Hall of Fame as a builder.

He also has been the voice of Day 2 of the draft for decades, and this was his last draft serving in that role. He was given a standing ovation at the start of Round 2, and every team in the NHL thanked him for his service during the final round while making its picks.

The Dallas Stars captain was playfully dunked on by Hall of Famer and former Dallas captain Mike Modano. The two appeared on stage during the Stars' first-round pick, and Modano noted that while he had experienced this moment before, Benn never did.

Later, Modano noted how much prep time Benn needed before the appearance. "We just needed to get the script done early so he could have two hours to look at it. It was only two lines. But the name of the draft pick [Ty Dellandrea] sent him for a loop," he said, laughing.

It's a great time for USA Hockey. Youth participation is up. The NHL is on the verge of adding another American-based team (Seattle), which means potential growth in that region as well. In all, 55 Americans were drafted in 2018, as the U.S. is pumping out a new generation of stars.

Oh, and did we mention the buzz is already building for next year's draft, which should be headlined by an American, Jack Hughes, as the No. 1 pick? For now we have Jack's brother Quinn, a swift-skating defenseman, as well as Brady Tkachuk, a dynamite personality and potentially dominant power forward, among the top 10 picks.

Loser: Hockey in the U.S.

It's going to be tough to market these young American stars when so many are stashed away in Canada. Tkachuk was picked by the very unsexy Ottawa Senators at No. 4. (His equally dynamic brother, Matthew, plays for the Calgary Flames.) Quinn Hughes was picked by the Vancouver Canucks.

Couple that group with Brock Boeser (Vancouver), Johnny Gaudreau (Calgary), Auston Matthews (Toronto) as well as the 11 Americans on Winnipeg's roster, and that's a haul of talent that casual fans won't get to catch on NBC's game of the week very often.

One bright spot: The Rangers traded up to select Minnesota-born K'Andre Miller at No. 22. An engaging personality, he could shine on Broadway -- though it might take a few years for him to make the roster.

There were plenty of teams in on the Ilya Kovalchuk sweepstakes. The Los Angeles Kings were the ones to get the good news.

The Kings always seemed like the favorite, and especially because they were willing to kick in a third year on the deal. GM Rob Blake was desperate to add offense after his team mustered only three goals in a first-round sweep by division rival Vegas in the playoffs. By all accounts, Kovalchuk still has juice (and should be especially lethal on the power play).

This signals the Kings are going all-in on a championship with this core; Kovalchuk will be the 10th player on the roster over the age of 30.

Boston Bruins GM Don Sweeney sounded cautiously optimistic Friday after making his pitch for Kovalchuk. Of all the teams that lost out on the Russian superstar, Boston could have used him the most.

Now Sweeney has to scrape together an offseason Plan B. Besides re-signing restricted free agents, the Bruins could use another scoring winger. So who are they going to call? Rick Nash.

"He's strongly indicated that Boston is a place he would consider," Sweeney said Saturday. "As would we."

We'll do Bruins fans a favor and not list Nash's stats with Boston in the 2018 playoffs.

The package of Orpik and goalie Philipp Grubauer netted Washington the No. 47 overall pick, which it used on Kody Clark, the son of former NHL player Wendel Clark.

While the restricted free-agent backup goalie has to be happy with his new three-year deal worth $10 million, it was Grubauer's stated goal to be a starting goaltender in the NHL. It won't happen next season, as GM Joe Sakic made it clear that Grubauer will share time with Semyon Varlamov. But hey, what's a little competition?

The Hurricanes promised to be active in reshaping their roster, and they delivered. Carolina unloaded two players who were proving difficult to re-sign, and in exchange added an established top-four defenseman (Dougie Hamilton), a stopgap, bottom-six forward (Micheal Ferland) and an elite defensive prospect (Adam Fox) who, if he signs, could be the face of the blue line for years to come.

GM Don Waddell has hinted that more moves still could come, but for now, Canes fans should feel better about the state of the roster.

For the second time in four years, Hamilton was shipped on draft weekend. And once again, the character assassins were out to rationalize why. (In an interview with Fan 960, Sportsnet's John Shannon said: "The whole team would go for lunch at Moxies, and Dougie Hamilton would go to the museum.")

That can't feel great for a defenseman who actually has played some great hockey of late, especially finding his way with Mark Giordano as a partner. We feel for Hamilton. We really do. Waddell says he plans on keeping him on the Canes' roster.

Filip Zadina might be the surest scorer in this draft, and somehow -- miraculously -- he fell in the Red Wings' lap at No. 6 overall. This is a winger who can play as soon as this season, even in a top-six role.

The Red Wings then capitalized on another draft faller, when center Joseph Veleno was available at No. 30. Detroit's biggest need was defense, and the Wings addressed that with three defensemen during the next two rounds.

Detroit is embarking on a total makeover, and this draft couldn't have gone any better for GM Ken Holland, who has been on a roll since the trade deadline after bringing in a haul for Tomas Tatar. Apparently, reports of Holland's demise have been greatly exaggerated. The Red Wings being good again is fun for everyone.

Fun was an endangered species for all but the Red Wings this weekend, after momentum had been building in the weeks before the draft.

The Ottawa Senators seemed poised to make several splashes -- the biggest involving Erik Karlsson. The Canadiens' Max Pacioretty could have been on the move. So, too, could the entire Carolina Hurricanesroster. Yes, the Hurricanes gave us something to buzz about on Day 2 with an old-school, five-player shuffle with the Flames.

We were promised a series of bombastic fireworks; instead, we got a few sparklers -- especially on Day 1.