WNBA Board of Governors committee looks at Isiah Thomas ownership 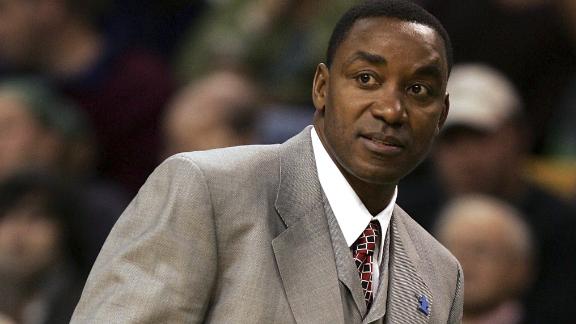 NEW YORK -- Isiah Thomas' partial ownership petition for the New York Liberty is being vetted by a committee of owners from the WNBA's Board of Governors the league announced Monday.

"We're still in the middle of the process," Alter told The Associated Press on Friday. "Until the process is over, it's not appropriate for me to say anything."

Having a committee review Thomas' application is common for the league's Board of Governors.

Thomas had an unsuccessful stint as coach and president of the New York Knicks from December 2003 to April 2008. After being fired as coach, he remained with the team in an unspecified role, even after a lawsuit brought by former team employee Anucha Browne Sanders cost Madison Square Garden $11.5 million in a settlement. Sanders alleged she was sexually harassed by Thomas, who was not found personally liable.

Thomas was announced as the team's president last month and submitted his paperwork to be a partial owner a few weeks ago.

The Seattle Storm ownership group, including Gilder, said a few weeks ago that they "believe there is no statute of limitations on the mandate that all WNBA owners and executives serve as exemplary role models and leaders."

They added in their statement that "the sports world is finally beginning to address issues such as sexual harassment, domestic violence and sexual assault, all of which have been inadequately addressed for far too long. The WNBA belongs in a leadership role in addressing these sensitive issues."

WNBA President Laurel J. Richie told The Associated Press a few weeks ago that she had hoped to have a decision on Thomas' ownership application by the start of the season, which begins Friday.

The Liberty open up at home against the Atlanta Dream that night.

OTL: Doubting Thomas
Isiah Thomas' role in a sexual harassment case in 2007 has caused some to question his appointment as president and prospective part-owner of the New York Liberty.