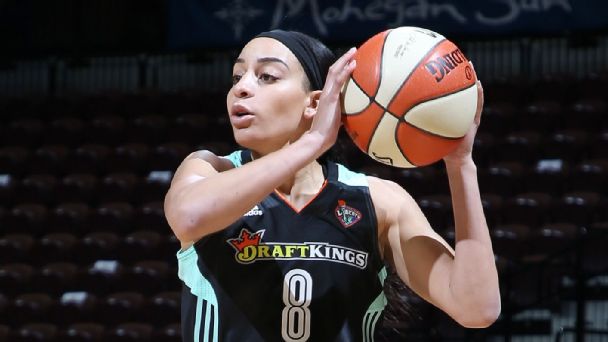 The WNBA season opens on Mother's Day weekend, a holiday of even more significance now for Liberty guard Bria Hartley. She's mom to a 4-month-old son and learning the balancing act that is universal to all mothers who work outside the home. But she is also learning the particulars of being a professional-athlete mom, for whom returning to the job means physically rebuilding yourself.

"One of the things for me is my core strength isn't back where it was," Hartley said. "And strength is something I had to work on a lot in general [even before pregnancy].

"But I'm the kind of person, if I set my mind to something, I'm going to get it done. I don't think there was ever a moment of doubt, but you can get frustrated. Just because you're used to doing something that seemed easy before, and now it's a lot harder."

There are aspects of the athlete's journey to and through motherhood that can't be simplified, and getting back into shape is one of them. But Terri Jackson, who took over a year ago as director of operations for the Women's National Basketball Players Association, has been thinking about what could be improved for player moms.

"There are companies everywhere that have revisited and reviewed their benefits," Jackson said. "I think that dialogue at least needs to be started. And it can come from both directions -- from some of the teams up to the league leadership and down from leadership to all the teams."

As part of the WNBA's collective bargaining agreement, which was signed in March 2014 and runs through October 2021, players who get pregnant while under contract receive 50 percent of their salary while they're out and have their medical expenses covered by insurance.

That's helpful, certainly. Eventually, the WNBA players' union and agents who represent the players are hopeful that the league might consider doing more, including in the realm of childcare. As these are all things negotiated in collective bargaining, the WNBA declined to comment, which is standard policy. But it's a topic the players' union and player agents continue to discuss.

"The WNBA should lead or at least match the most progressive companies on policies relating to women and working moms," agent Lindsay Kagawa Colas said. "It should be viewed as critical that a player can go to practice and a club can provide them with childcare, and that's not salary-cap circumvention.

"I'm confident most clubs would want to do whatever they could to insure their working moms are supported so they're empowered to perform at a high level."

Players returning from pregnancy know they have to push themselves through frustration and fatigue. Their jobs depend on it. Hartley got advice from two former teammates in Washington, Tayler Hill and Tianna Hawkins, who are both moms.

Hill had her son, Maurice, in June 2014, during her second year in the WNBA. Early in her career, she hadn't had much time to establish herself. She was determined to get back on the floor for the Mystics that season; she played five regular-season games and one in the playoffs.

"I was kind of antsy because I was ready to play again," Hill said of the latter stages of her pregnancy. "I found out I really love this game of basketball and want to play it for as long as I can."

Hill said she doesn't think of her mom responsibilities as burdensome.

"My son brings so much joy into my life," she said. "He doesn't care what I did on the court. He loves me the same way. I'm his superhero."

That said, Hill and other players who are moms say they know they can't do it alone. Players' partners or spouses, family members, friends and teammates all pitch in.

"Don't turn down help. It really does take a village," said Minnesota guard Jia Perkins, whose daughter, Aalirah, is almost 13. "I don't know how I'd do it without my mom and my family."

Perkins took Aalirah overseas from about the time she was 2 years old. Most WNBA players go overseas to compete in the winter and spring. That can present additional logistical challenges for moms, but it also brings more options. Some teams/countries have more progressive policies in regard to childcare, and players can negotiate living space and travel expenses for their children and caretakers.

"She adjusted easily going to other schools overseas, and I think it was a great experience," Perkins said of Aalirah. "But I haven't gone the last few years. Now she's in middle school, and I want her to have her core friends through high school."

Perkins' pregnancy was seen as a liability by teams when she was drafted. She was part of a very good 2004 class that included current Lynx teammates Lindsay Whalen and Rebekkah Brunson, plus Phoenix's Diana Taurasi and Los Angeles' Alana Beard. All were top-10 picks, with Taurasi and Beard going Nos. 1 and 2.

But Perkins, who was about seven weeks from giving birth on draft day, wasn't chosen until the third round, at No. 35, the fourth-to-last pick. Those are picks that often don't make a roster.

Yet Perkins is in her 14th WNBA season. Talent-wise, she clearly belonged in the first round. But the fact that she was pregnant made teams see her as too much of a risk -- even though a player from the same college as Perkins, Texas Tech, had proven that coming back from pregnancy was not an obstacle to being great in the WNBA.

Sheryl Swoopes had her son in the WNBA's inaugural season in 1997 and went on to win three MVP awards. But that had no impact on how Perkins was viewed. She had to prove herself.

That's what Mistie Bass will have to do too, despite being a WNBA veteran. Bass is pregnant, and her baby is due June 13. She is 33 and has played 10 seasons in the WNBA, mostly as a reserve post player who understands her role and does it well. She spent the past three seasons in Phoenix and won a WNBA title with the Mercury in 2014.

She always intended to have a child and set aside a savings fund specifically for that. She wanted to be prepared for any possible circumstance, which was fortunate because things haven't gone exactly as planned. Bass is an unsigned free agent, so she isn't currently earning a salary, nor is she on the WNBA's standard health insurance. She's on COBRA coverage, which is very expensive.

Also, she is having a hard time lining up a job overseas for later this year, even though she'll have had time by then to get back in shape.

"It's not based on anything I've already done in my career," she said of teams' reticence to sign her. "It's just because I'm pregnant. I'm going to have to prove myself all over again."

One of her former Mercury teammates, DeWanna Bonner, is sitting out this season because she's pregnant. Bass said there are certain decisions that players have to make if they want to have children, and they usually aren't easy.

"A lot of us just never know a 'perfect' time to get pregnant -- because there isn't one," Bass said. "We make most of our money overseas. But we want to play in the [United] States too. So regardless, you're going to miss some paychecks if you have a baby during your career."

Kawaga Colas said that's one reason some players have opted to go another route: They have their eggs frozen, with the idea that they might be artificially inseminated later, when they either are well-established financially or have stopped playing.

This isn't an expense covered by insurance, and it is another area Colas hopes will be a priority to be negotiated at some point.

The situation of former Storm player and native Australian Abby Bishop brought the issue of childcare -- and how different countries and sports organizations approach it -- to the front burner. Bishop took custody of her newborn niece in 2013, when her sister was unable to care for the baby. Bishop, then 24, wasn't expecting to be a mom, but suddenly she was, and the child has remained with her.

Part of Seattle's 2010 championship team, Bishop also played for the Storm the past two seasons. Bishop thought the Storm did as much as they could -- within league rules -- to help her make things work. In Europe and Australia, childcare was part of her contract.

However, it became an issue with the Australian national team, which required her to cover the costs of traveling with a nanny and mandated that the child and nanny stay apart from the team. Bishop opted not to play in the 2014 world championship because of that. Later, she was able to resolve some differences with Basketball Australia, but she was cut before the 2016 Olympics.

Bishop's situation was part of the impetus for the Australian Athlete's Alliance to become even more proactive. The AAA is what's known as the "peak body" -- or umbrella organization -- that represents the country's elite professional athletes, who are also represented by their own sports union.

The AAA doesn't do collective-bargaining negotiating, but it advises eight unions and advocates for all the athletes. Between 750 and 800 of the roughly 4,500 athletes represented by the AAA are women.

"We have established a best-practice parental policy that we're seeking to be enacted across our members sports," AAA general secretary Jacob Holmes said. "We've invested significant time in understanding what was going on globally as well as domestically. We're fortunate in Australia that I think we have quite robust workplace policies for women and their families in the general workforce, so we've really tried to get them across to the sporting workplace."

Netball is the biggest women's sport in the country, and Holmes said the Australian Netball Players Association has been successful, through collective bargaining, in reaching the parental-policy standard that the AAA advocates. That covers childcare issues such as paid travel and lodging for caretakers.

Holmes and Jackson have discussed Australia's policies, but obviously, there are not just organizational differences but national ones as well. Ultimately, what Jackson hopes to do is continue to push the WNBA to consider how it can best serve its working moms.

"What nobody wants to do is rewrite the collective bargaining agreement through a series of side agreements," Jackson said. "But I think this is an issue where we could get league and union folks on the same page very quickly. At least I'm hopeful we could and possibly carve out a side agreement on this issue until it's time for the larger discussion about the entire document."

Whether that happens remains to be seen. Ultimately, the WNBA's moms return to the fact that it's the people around them who are so critical to making this work. Sunday is Mother's Day, a celebration of them. But the WNBA's moms give a lot of credit to all the people who help them.