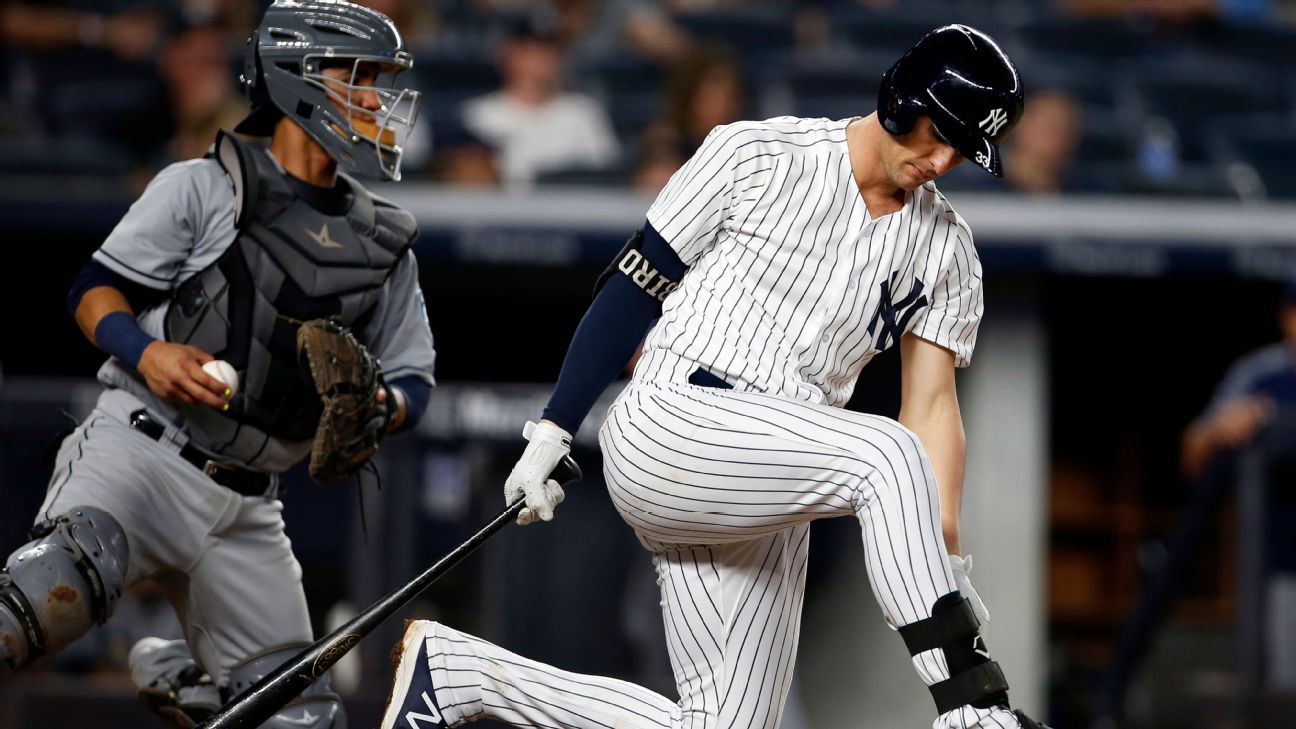 NEW YORK -- The banged-up New York Yankees added yet another player to the injured list Tuesday.

This time, it was Greg Bird, the oft-injured first baseman who has been struggling offensively. Bird was placed on the 10-day IL, retroactive to Sunday, with a left plantar fascia tear.

In a corresponding move, the Yankees called up first baseman Mike Ford from Triple-A Scranton/Wilkes-Barre and signed him to a major league contract.

It's unclear exactly how long Bird will be out. Manager Aaron Boone guessed Tuesday that the injury might keep Bird out "at least a month."

Boone said Bird will be in a boot for the next 10-14 days, and then be re-evaluated. The manager also said this isn't the first time his first baseman has had problems with plantar fasciitis. He has "dealt with some" of it in the past, Boone added.

Outfielder Jacoby Ellsbury, who hasn't played in nearly two years, has been on the Yankees' IL since last season, due in part to his own plantar fascia issue. While continuing to rehab from that foot injury, Ellsbury was transferred Tuesday to the 60-day IL.

Luke Voit will be the Yankees' primary first baseman for the time being, with Ford largely serving as his backup. The Yankees also probably would feel comfortable platooning the two players in a first baseman/designated hitter situation, with Voit perhaps seeing the bulk of action in the DH role.

Of the 14 games he has appeared in this season, Voit has been the DH nine times.

Ford, a New Jersey native, brings a hot bat to the Bronx after slugging five homers and 14 RBIs in 10 Triple-A games this season. He had a 1.364 OPS in that limited action with the RailRiders. The Princeton product has spent his entire career with the Yankees, signing as an undrafted free agent in 2013.

"It's kind of the person I've always been," Ford said of his unique big league journey. "Choosing Princeton out of high school kind of hurt my draft stock a little bit there. I chose it for other reasons -- to set myself up for life after baseball."

Prior to his call-up, Ford had played 561 games in the minors. The 26-year-old admitted that all the time in the minors has made him wonder over the years about when, or if, his first major league contract would come.

"Every player goes through it at certain points, but if you just keep the faith and stay patient, good things happen," Ford said. "You have to take the positives out of each day. It's such a tough game, just mentally on yourself."

With the Yankees playing so close to his hometown, and with several college friends now living and working in New York, Ford anticipated having a large group of supporters in the stands for Tuesday's game.

It's unclear exactly how Bird suffered the injury, but he was seen hobbling up the first-base line after beating out a ground ball against the White Sox on Saturday. He later scored as part of a three-run inning that powered the Yankees to a win.

Boone said the sight of the limping Bird caught the Yankees' attention. Earlier that day, Bird came in for treatment from the Yankees' training staff because he arrived at the ballpark feeling a little sore. Boone nearly scratched him from the start, but Bird felt good enough to play, and made it through the game.

Then on Sunday, the Yankees began testing on Bird's foot.

Bird, who batted under .200 in limited action in each of the previous two seasons, is currently hitting .171 (6-for-35) with one homer and one RBI this season.

He has dealt with shoulder problems throughout his career and had surgery last spring on his right ankle after dealing with another injury to the same ankle the previous season.

With Bird now sidelined, the Yankees once again have a dozen players on their IL.

"We could either dwell on that, or we could go out there and just play, and we have to play with the guys we have," one of the hurt Yankees, reliever Dellin Betances, said.

"What's our reality each and every day? Who do we have available? How can we maximize our roster to go out and rack up W's? It's as simple as that. Whether you have all your guys at different points, whether you're a little bit banged up and depleted, you still have to prepare and focus and do all you can to go out there and make it happen. Again, I say, that expectation hasn't changed." 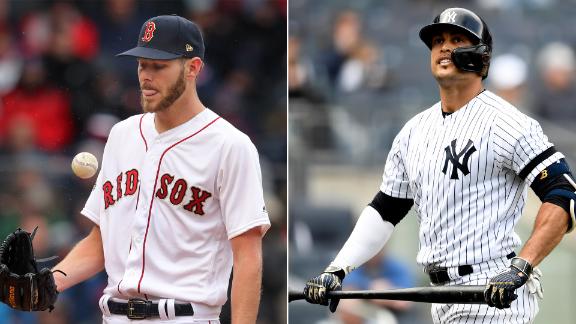 Red Sox, Yankees limp into first meeting of the season
The Red Sox have struggled to start the season, while the Yankees have been plagued with injuries. It has been a tough April for the traditional powers.
Report a correction or typo
Related topics:
sportsespnluke voitmlbgreg birdnew york yankees
Copyright © 2020 ESPN Internet Ventures. All rights reserved.
More Videos
From CNN Newsource affiliates
TOP STORIES