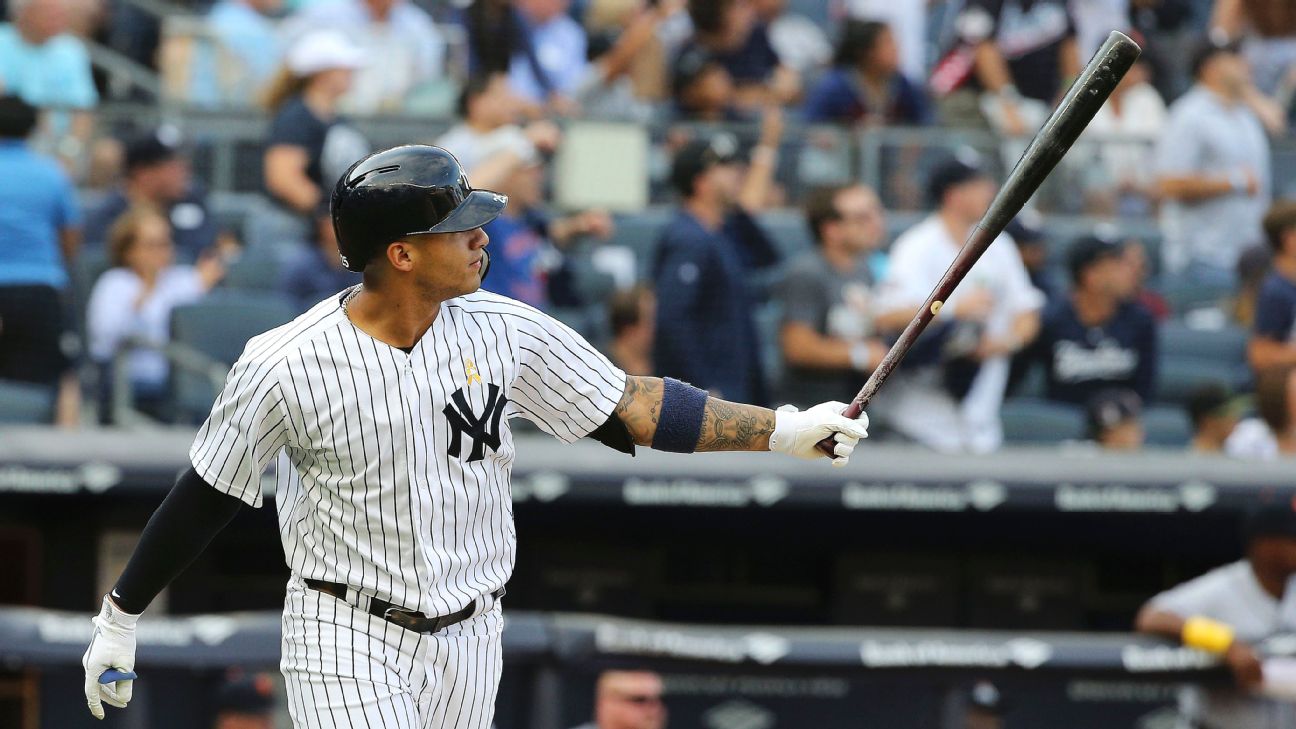 OAKLAND, Calif. -- Now that the calendar has turned to the final month of the regular season, brace yourself: The postseason push is about to get more intense, more serious and, most of all, more fun.

For the New York Yankees, that all begins in earnest Monday afternoon when they start a three-city, nine-game road trip that could go a long way toward determining their standing in the American League's wild-card race.

The Yankees play the Oakland Athletics, who face similar stakes as New York. After splitting a four-game set to the division rival Seattle Mariners over the weekend, the A's host the Yankees in an important three-game set that may be a glimpse at things to come.

Currently the top teams in the American League wild-card standings, the Yankees and A's could meet again in the elimination wild-card game three days after the regular season. The victor would advance to the AL Division Series, likely facing the Boston Red Sox.

Because the Yankees have a better record than the A's, that wild-card game would be played in the Bronx if the season ended today.

As Yankees general manager Brian Cashman will remind you, though, the season isn't ending today. Even with his team 7 games behind the Red Sox in the AL East, Cashman isn't conceding anything just yet.

"The preference is the division title," Cashman said this weekend. "The alternative is the first wild card. So let's stay tuned and see how it plays out."

How it has played out recently

Yankees: Over the past 18 days, the Yankees have played only sub-.500 teams. And although that stretch ended Sunday with New York having gone 11-5, there is a feeling that the Yankees didn't take full advantage of the situation. That's mostly because four of those five losses came in the past seven days.

A weekend split with the Detroit Tigers and a series loss to the Chicago White Sox largely negated the good vibes that came the previous weekend during a series sweep in Baltimore. After going 8-1 against the Orioles, Blue Jays and Marlins, the beaten-up Yankees had started easing back into the division race. For a team that had been weathering its share of second-half injury woes, winning eight of nine -- regardless of the competition -- was a big deal.

After adding a few new bats and arms at both the waiver and non-waiver trade deadlines, the Yankees are hopeful they have enough firepower to, if not catch the Red Sox, then at least stave off the A's for home field in the wild-card game.

A's: Oakland, which has won its share of games in its final at-bat this season (the A's have eight walk-off wins), was on the wrong end of a walk-off last week at Houston. The defeat at Minute Maid Park capped a pivotal set, which Oakland dropped, as it continues chasing the Astros in the AL West. The A's enter play Monday trailing Houston by 2 games.

Since the All-Star break, they have picked up their game even further, going 27-14, leapfrogging their way into second place and completely trimming Houston's once-wide lead. At the end of the first half, the A's were third in the division, trailing Houston by eight games. Three times in August, they tied the Astros for the AL West lead.

Since opening a series at Anaheim on Aug. 10, the A's have gone 14-9. Within that stretch, they have won one series and split another with the Mariners, who trail Oakland by 5 games in the wild-card standings. The A's also have both won and lost series against the Astros in the past month. Thanks to Sunday's win over the M's to split its latest set, Oakland hasn't lost back-to-back series since mid-May, when it was beaten by the Astros and Yankees.

Yankees: After batting just .158 (12-for-76) with three homers and a .556 OPS in his first 21 games of the second half, rookie Gleyber Torres has started turning it on, hitting at a torrid pace in his past 15 games.

Torres has batted .407 (22-for-54) with four home runs and a 1.122 OPS in those games. Much of his recent offensive success has coincided with his defensive switch from second base to shortstop. He has spent the better part of the past 14 games at short while Didi Gregorius recovers from a bruised left heel he sustained in a collision at first base on Aug. 19. Gregorius had hoped to come off the disabled list in time to play at Oakland, but Cashman indicated over the weekend that his regular shortstop might not be ready until this weekend in Seattle.

"If I had to guess, I don't think he's active in Oakland. That's my opinion," Cashman said. "Seattle's more likely. But if you ask Didi he might be telling you something more different because he is Mr. Optimistic and Mr. Positive, and that's what we love about him."

In addition to Torres' hot bat, the Yankees have been getting a lift lately from fellow rookie Miguel Andujar. In 42 games since the All-Star break, the third baseman is batting .343 with 11 doubles, 11 home runs and a .976 OPS.

A's: When it comes to Oakland's offense this season, the conversation has to begin with designated hitter Khris Davis and his MVP-like numbers. With a month to go, he already is closing in on career highs in home runs (43), RBIs (110) and hits (140). And at the rate he has been collecting homers and RBIs of late, it's possible that he passes those numbers during this series.

With a homer on Saturday, Davis became the first player in the majors to 40 home runs this season. He's only the second player in franchise history to have 40 or more homers in three straight seasons. Jimmie Foxx did it from 1932 to 1934.

Yankees: The Yankees are lined up to have three of their top starters going in this series. After CC Sabathia gets the ball Monday, J.A. Happ goes Tuesday and Luis Severino pitches in Wednesday night's finale.

Happ and Sabathia are coming off challenging outings. Sabathia took a loss after giving up three runs in five innings in his last start. Had the Yankees given him better run support, he may have escaped with a win. Happ is trying to respond from his worst appearance in pinstripes, when gave up five runs and 10 hits against the Tigers.

Before that ugly outing, Happ had won each of his first five starts since being traded to New York at the July 31 non-waiver trade deadline. His ERA had dropped more than 0.20 points within those starts.

New York's bullpen, in flux for a still-to-be-determined amount of time due to Aroldis Chapman's balky left knee, has used a bevy of combinations the past two weeks. The changes have produced mixed results. For example, Dellin Betances, who got the save in Saturday's 2-1 win over Detroit -- and who also became the first reliever in baseball history to post five straight seasons of 100 strikeouts, gave up a pair of ninth-inning homers the night before in a stunning loss.

A's: Relief pitching has been the hallmark of Oakland's staff as injuries have ravaged the starting rotation. Four of the five pitchers who were in Oakland's opening-week rotation currently are on the DL, with two done for the season due to Tommy John surgery. One of those four, Sean Manaea, is serving a stint on the 10-day DL, but his status for a full return this season remains in doubt.

As poorly as the A's injury-depleted rotation has performed (their starters rank 15th in opposing batting average at .249, and 17th in ERA at 4.21), their relievers have been among the league's best.

Blake Treinen has played a key role in the bullpen's success, going 6-2 with 35 saves and a 0.94 ERA in 58 appearances this season. The numbers are quite the departure from his 2017 season, when he had an ERA near 4.00 after being traded from Washington at last year's non-waiver trade deadline.

Right-hander Mike Fiers, acquired from Detroit last month, is scheduled to start against Severino on Wednesday. Keep an eye on how he pitches to Yankees slugger Giancarlo Stanton. The two have a history after Fiers hit Stanton in the face with an 88-mph fastball four years ago when Stanton played for the Marlins and Fiers was with the Brewers.

Earlier this season, while Fiers was pitching for the Tigers, Stanton stared the pitcher down and pointed at him after belting a 456-foot homer off him. Stanton's homer came after Fiers had hit him on the arm earlier in the game. The two traded barbs when approached by reporters after that June game. Fiers called Stanton's actions "childish," while Stanton cautioned the pitcher from throwing too far inside to him again.

Yankees: Entering play Sunday, New York owned the fifth-hardest remaining schedule in baseball. With six more games against the Red Sox, these three in Oakland and three more in Seattle, the Yankees are about to hit a much more difficult stretch than what they just faced. The Yankees also have four more games against the rising Rays at Tropicana Field, a place where they have won just one of six this season.

Despite the challenges they're due to face the rest of the season, the Yankees came out of the weekend with a 100.0 percent chance at making the playoffs, per FanGraphs. They also enter the week with a better than 95 percent chance at hosting the wild-card game.

Oakland's schedule could be the difference in helping it push past New York to host the wild-card game, although they have 4 games to make up. As things get more difficult for the Yankees, they get a little easier for the A's, owners of the 10th-easiest remaining schedule, coming into Sunday.

Where will wild-card game be? Yankee Stadium

Davis is the absolute power-hitting truth, and the A's certainly have a more favorable run coming up in the next four weeks. But New York has a bevy of boppers of its own, and it could be getting a quartet of injured players back before the regular season ends. Along with Gregorius' upcoming return, the Yankees are holding out hope that Chapman, Aaron Judge and Clint Frazier make it back before October.