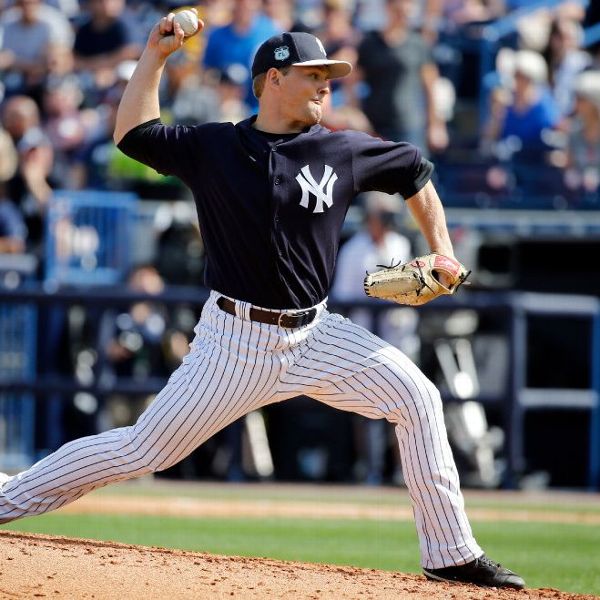 Adams will be making his major league debut against the Boston Red Sox at Fenway Park after going 3-5 with a 4.50 ERA in 21 starts at Triple-A this season. In his last start on Monday, Adams went 7 1/3 innings, striking out eight and allowing two hits and no earned runs.

"Obviously we're a little depleted here of late in some of the moves we've had to make," Yankees manager Aaron Boone said. "He's coming off some really strong starts. Hopefully he can give us a quality outing and give us a chance [Saturday]."

The Yankees aren't shying away from the fact that Adams' debut is coming in a key road rivalry series.

"Hopefully he, as we've seen with a lot of our guys, they've come up and been able to handle these situations," Boone said. "It's a tribute to our player development and our organization for preparing these guys for what it is to come up here and to pitch in the fire and to play in the fire.

"But that said, it's the first start and there's always going to be jitters that go with that, and that's part of it and dealing with it, and sometimes that can be something that works for a guy."

The call-up comes after one of the Yankees' trade-deadline additions, lefty J.A. Happ, went on the 10-day disabled list Thursday (retroactive to Monday) following a diagnosis of hand, foot and mouth disease.

Although Happ is missing this start due to the illness, Boone believes he'll be able to return for his next turn in the rotation.

New York is going with Adams on Saturday largely because he's one of the few available pitchers in the upper ranks of the organization. Fellow recent call-up Luis Cessa was intended to be the starter Saturday, but when the Yankees were forced to use him in Thursday night's 15-7 loss, that eliminated him as a possibility.

"I watched video on [Adams] a little bit more, read the reports each time, so I'm certainly following how his year has unfolded, and he's been pitching pretty well over an extended period, and maybe coming off one of his best starts last time," Boone said.

Before being optioned back to Triple-A on Friday, Cessa gave up five runs in 3 2/3 innings Thursday. With Cessa going back to the minors, reliever Tommy Kahnle was recalled from Triple-A. He returns to New York's roster for the first time since June.

Another option, recently acquired right-hander Lance Lynn, pitched 4 1/3 innings of scoreless relief Wednesday against the Orioles. Triple-A starter and highly touted Yankees prospect Justus Sheffield also could have been an option, but he pitched Thursday for the Yankees' Scranton/Wilkes-Barre affiliate.

A 2015 fifth-round draft pick, Adams has spent his minor league career in the Yankees' farm system.

It's unclear how Happ contracted the viral disease that normally affects children younger than 5 years old. The only theory the Yankees have is that he might have gotten it while flying commercial across the country to make it to New York after being traded.

"No one's really going to have an answer to it, other than just guessing," Cashman said.

The disease was also recently contracted by New York Mets starting pitcher Noah Syndergaard, who also went on the 10-day DL because of it.

The Mets believed Syndergaard contracted his case of hand, foot and mouth disease while working at a camp for kids during the All-Star break. The day after Syndergaard was at the camp, he pitched five innings in a Mets win over the Yankees in the Bronx. Late in the start, his velocity noticeably decreased as he began feeling blisters on his hands.

Happ's Yankees debut came last Sunday at Yankee Stadium, where he threw six innings of three-hit ball in a win over the Kansas City Royals.

According to the Centers for Disease Control and Prevention, hand, foot and mouth disease can spread when people who have it cough or sneeze. People also can become infected if they come into contact with an infected person's blister fluid. Symptoms include fever, mouth sores and a skin rash.