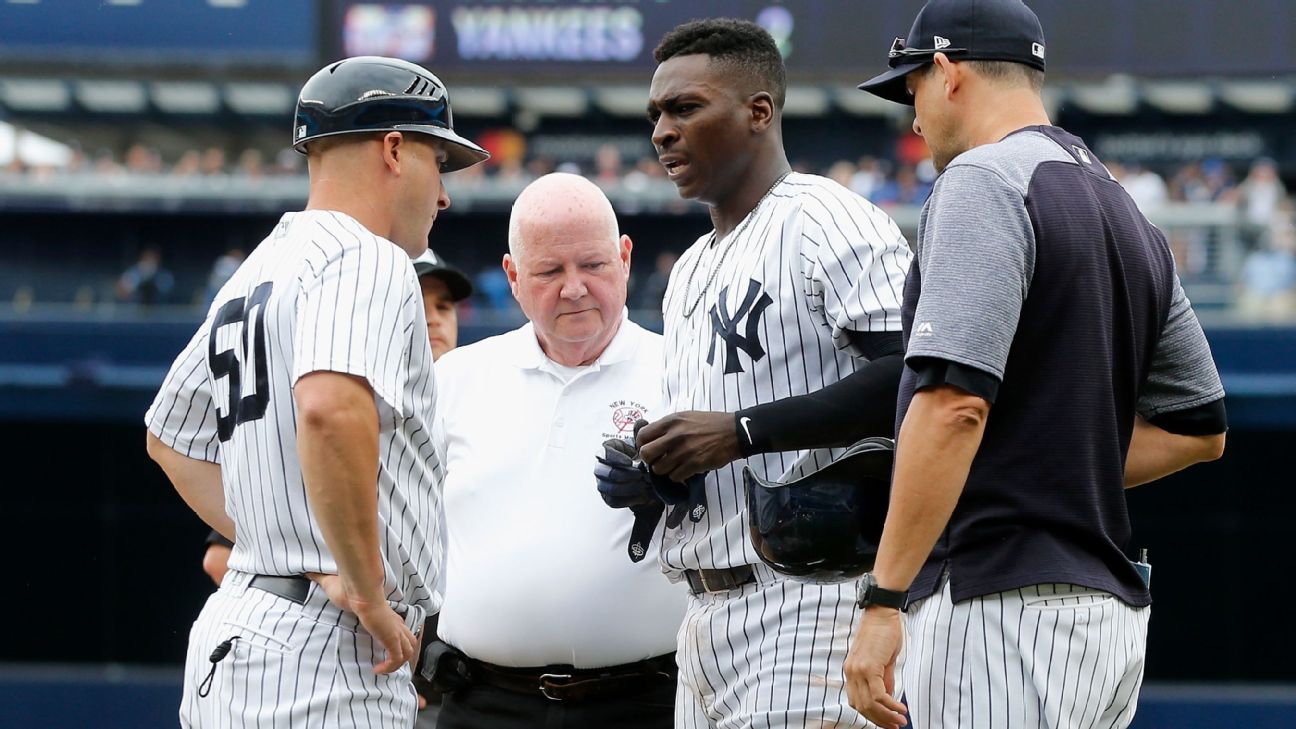 The move comes just ahead of the Yankees opening a two-game series against the Miami Marlins at Marlins Park.

"The hope is that'll be a short stint," Boone said Tuesday. "But the next couple of days will really tell us the picture. He's better today than he was [Monday]."

After hinting Sunday that a large amount of swelling associated with the injury could ultimately send Gregorius to the DL, Boone explained Tuesday that the swelling alreadyhas started going down.

Gregorius, whose DL stint is retroactive to Monday, remained in New York. He'll be evaluated further Wednesday night, at which time the Yankees expect to have a better idea of just how long they'll be without him.

Gregorius was hurt in the first inning of Sunday's 10-2 home win over the Blue Jays when he collided with Toronto first baseman Kendrys Morales while beating out an infield single. After spinning in the air and landing awkwardly on his feet, Gregorius received attention from medical personnel at first base. He remained in the game and scored a run in the inning. He later left the game.

Gregorius was replaced in the lineup in the third inning by utility man Ronald Torreyes. Boone said Torreyes will get opportunities to play second base while Gregorius is on the DL, splitting time there with Neil Walker, who started at the position Tuesday.

Meanwhile, second baseman Gleyber Torres moves over to short, as he did Sunday. It's a position with which he has familiarity. Boone often has described Torres as a shortstop playing second base, due to his strong arm and athletic ability of covering ground at the position.

"Obviously, Didi is so important to what we do, he's such an important player to us, the middle of our lineup, the middle of our field -- he's kind of our quarterback out there," Boone said. "He does so many things intangibly well that we certainly will miss him. But we also feel like we have the people capable of stepping up for him while he's down."

Gregorius is batting .270 with 22 home runs and 74 RBIs. The 28-year-old went to New York-Presbyterian Hospital for more tests on Sunday.

The Yankees now have three of their top power threats -- Gregorius, Aaron Judge and Gary Sanchez--on the 10-day DL. Starting pitcher CC Sabathia also is on the 10-day DL, but he is expected to come off Friday.Sanchez is scheduled to begin playing in rehab games in the Gulf Coast League on Thursday. It's still uncertain when Judge will be back.

Without Gregorius, Judge and Sanchez, the Yankees are missing players who account for 31 percent of their home run production this season.