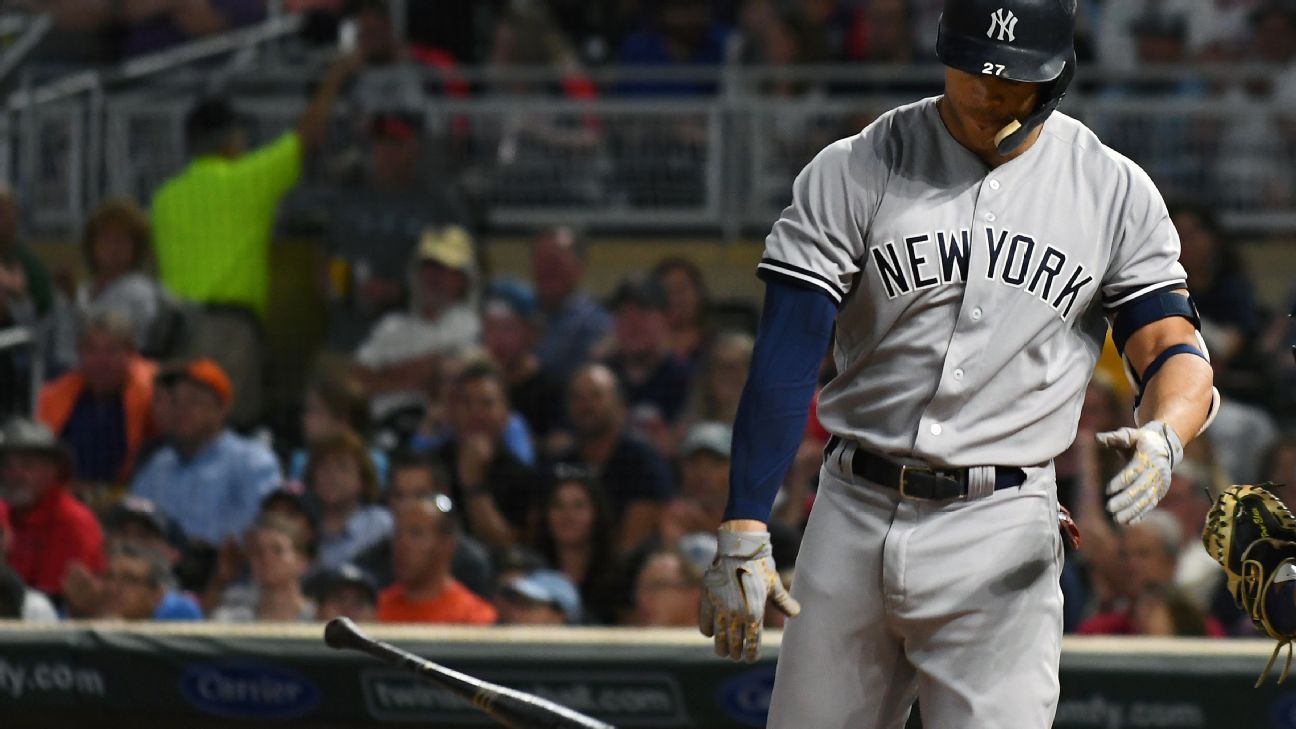 MINNEAPOLIS -- The New York Yankees are heading back home from a rocky road trip with a heightened sense of urgency as their wild-card lead has shrunk to one game.

"We expect more," manager Aaron Boone said, "and we've got to get rolling."

Before returning to the Bronx on Friday for their final home series of the regular season, the Yankees lost Wednesday at theMinnesota Twinsin a 3-1 ballgame that closed out a pivotal late-season, three-city road trip.

While away from home over the past 10 days, the Yankees went 4-5, dropping their series to theAthleticsand the Twins. The series loss at Oakland might have been the most costly, as it helped the A's creep closer in the American League wild-card chase -- a race the Yankees had led by 4 games the day before they arrived in Northern California.

"I haven't looked," Yankees reliever David Robertson said late Wednesday, when asked about the wild-card standings. "I know we're close. That's about it."

Thanks to the Yankees' loss in a near-no-hitter and Oakland's blowout win at Baltimoreon Wednesday, the A's have tightened the race for the top wild-card spot to one game.

When a reporter told Robertson where the wild-card race stood, the right-hander shot back: "Well, how many we got left?"

The Yankees have 16 more games, beginning with Friday's opener against theToronto Blue Jays.

"Exactly. We've got plenty of time," Robertson said. "We've just got to put some good innings, good at-bats together and pick up some wins."

That might be easier said than done, considering how the Yankees have played lately.

Slugger Giancarlo Stanton has factored heavily into that rough offensive showing, amassing just four hits in the 10 games he has played. Batting .105 (4-for-38) with two RBIs, Stanton is homerless in that stretch, and he has an OPS of just .370. Boone and Stanton contend his timing is just a little off, but he's close, as they believe his at-bats are showing signs of improvement.

As poor as all of those numbers have been, they are about par for the course, given the way the Yankees have competed over roughly the past six weeks.

Since right fielder Aaron Judge went on the disabled list July 27, the Yankees have gone 25-20. Their hitters have a collective .235 batting average with 360 strikeouts in those 45 games. Their pitchers have a 4.31 ERA during that stretch.

"We've kind of been going through it a little bit lately," Yankees first baseman Greg Bird said. "That's just the way it is sometimes, and if we're going to get where we want to go, you've got to be able to bounce back from these things.

"The ball's in our court, basically. We've got a great team."

Minutes after his team needed an eighth-inning double from Bird to avoid being no-hit by Twins starter Jake Odorizzion Wednesday, Boone echoed that sentiment.

Part of Wednesday's adversity included having several well-hit balls taken away by stellar defensive play from the Twins.

In the fourth, Aaron Hicks had a base hit taken away when Twins second baseman Logan Forsythe dove for a ground ball in the outfield and threw over to first to get the speedster. An inning later, Luke Voit had a long fly ball to left snagged by Minnesota's Robbie Grossman, who went into a slide on the warning track.

Another three Yankees fly balls were hauled in on the track, two with the outfielders catching them on the run.

"When you don't get those hits in those big spots, it can change the outcome of a game," Bird said. "We've just got to find a groove again. It's kind of been here or there, hit or miss sometimes. The main thing for me, and everyone in here would agree, if we want to get to where we want to go, we've got to bounce back."

Yankees starting pitcher Luis Severino had a true bounce-back appearance on Wednesday. After giving up six runs and six hits in just 2 innings at Oakland last week, he was considerably more dominant. Against Minnesota, he allowed just four hits and a run through 5 innings.

Severino had taken a one-hitter into the sixth inning. Once he allowed three hits and got two key outs, he was pulled at 83 pitches. He wasn't happy when Boone removed him that early, as he believed he could have finished the inning.

"He's in the fight right now, and I respect the hell out of that," Boone said. "He wants the ball and he wants to get out of that situation."

The deficit the Yankees were staring at while struggling to collect hits grew as Robertson allowed a pair of runs in the next inning.

Even as he sees his team continuing to scuffle through the latter part of its schedule, Severino still holds on to optimism that its postseason wishes will be achieved. But if not, then so be it.

"Everybody here, they're working. They're doing the best they possibly can to win games," Severino said. "So whatever happens at the end of the year happens."