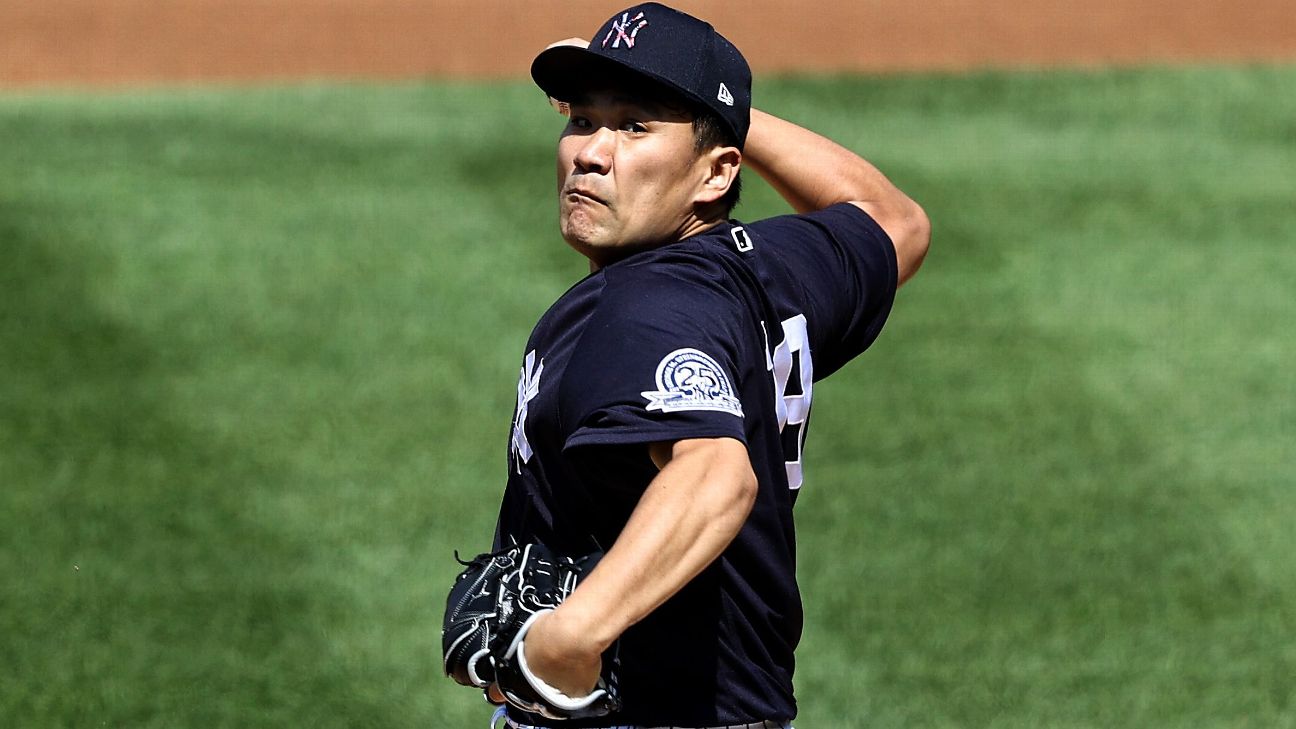 NEW YORK -- Masahiro Tanaka threw a 30-pitch bullpen session Thursday in his first mound appearance since he was struck by a line drive off the bat of New York Yankees teammate Giancarlo Stanton on July 4.

The 31-year-old right-hander remains uncertain for his first turn through the rotation.


"Threw all his pitches with really good intensity," Yankees manager Aaron Boone said. "I was really encouraged by what I saw today."

New pitching coach Matt Blake said Tanaka reached 88-91 mph and threw all his pitches. Tanaka is slated for another bullpen session Sunday, then is to face batters early next week.

Gerrit Cole is scheduled to start the Yankees' opener at Washington on July 23, followed by left-hander James Paxton in the second game two days later.

Tanaka and left-hander J.A. Happ also are part of a rotation that is likely to include lefty Jordan Montgomery, back from Tommy John surgery in June 2018. Because of the off day, New York could skip Tanaka until the second time through the rotation.

"I'd probably a little surprised if it's the first rotation through," Boone said. "And then it's just, again, seeing how his next bullpen goes, seeing how his facing live hitters go, and then what's the best decision for us and for Masa as far as do we want to build him up entirely at a big league level or do we want him to continue to build up and get to a point to where he's built up more like a starter?"

Teams can keep 30 players active during the first two weeks of the delayed season, giving the Yankees flexibility to push back Tanaka.

"We'll kind of take it day by day and obviously not put any necessary timeline on Masa," Blake said.


New York won't decide until just before the opener whether Tanaka needs to go on the injured list.

"I feel like Wednesday to have a good idea about when possibly Masa could join us again, whether that's three, five, six, 10 days into the season," Boone said.

Luke Voit said he saw LeMahieu in the clubhouse on Wednesday.

"Our guys are super-excited to have him back. It was good seeing him around the other day. So I'm glad he's back just in the nick of time," Voit said. "I know he's going to be ready. ... The machine is finally back."

Boone announced on July 4 that LeMahieu and right-hander Luis Cessa tested positive for the coronavirus before traveling to New York and said they were self-isolating at home.


LeMahieu signed with the Yankees before the 2019 season and hit .327. He set career highs with 26 homers and 102 RBI while splitting time among first, second and third. Following the departure of shortstop Didi Gregorius as a free agent, LeMahieu is expected to be mostly a second baseman this season as Gleyber Torres shifted to shortstop,

"I think we want to see him in person, play catch, kind of see what that looks like, see how he responds and then kind of get a sense of, OK, when's the right day to have him throw a bullpen?" Blake said. "Hopefully we can get him up to speed in the next couple weeks."

Boone didn't want to discuss a timetable for LeMahieu and Cessa.

"When you see them in uniform, then we'll be ready to talk about it," Boone said.