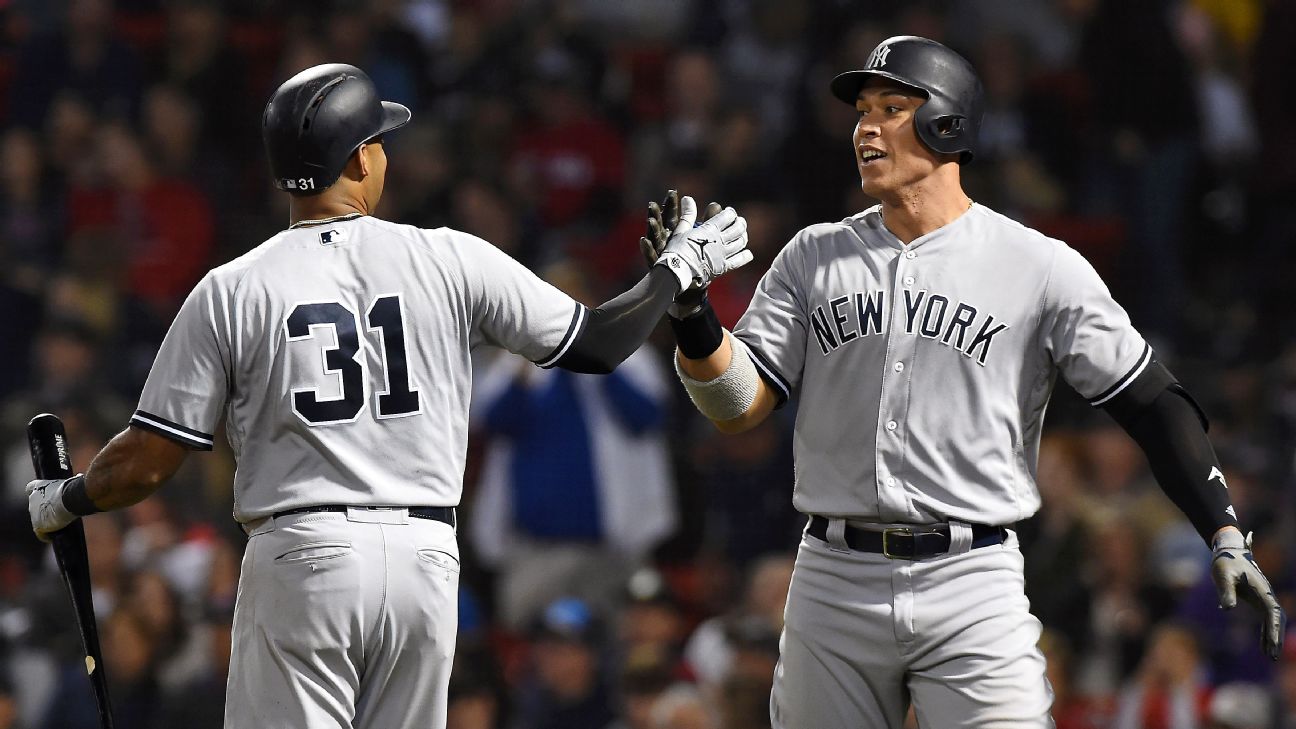 NEW YORK -- Given an extra 3 months for their brittle stars to heal, the New York Yankees will closely monitor the conditioning of Aaron Judge, James Paxton, Aaron Hicks and Giancarlo Stanton ahead of a season unlike any other.

"We want these players to withstand a 60-game sprint over a 66-day schedule," Yankees general manager Brian Cashman said Tuesday on the eve of the first arrivals for what has been dubbed "summer camp" in Major League Baseball's marketing deal.


New York had been set to open March 26 at Baltimore with many of its key players on the injured list but expects all of them to be available when training resumes this weekend.

New York placed a big league record 30 players on the injured list a total of 39 times last season, then overhauled its training and conditioning staff.

"Ultimately, we're in it to win it,'' Cashman said, "and I think everybody else should be feeling the same way. And especially in a shortened season, I think it heightens the ability for anybody to really take a shot at the title. And so, therefore, how they respond to this challenge remains to be seen, but I think it's certainly going to open it up for a lot of opportunities for teams to take advantage of."

New York is slated to go to Philadelphia before its game against the Phillies on July 29, according to information obtained by The Associated Press.

Judge did not play in any exhibition games because of discomfort in his right pectoral muscle and shoulder that he felt when swinging. The Yankees said March 6 that the right fielder had a stress fracture to his first right rib, an injury likely dating from a diving catch late last season. Judge later said he had a collapsed lung.

"We are very optimistic as of right now that maybe his proximation that he would be ready on Opening Day and in the lineup will ring true,'' Cashman said. "So now it comes down to game reps and facing live pitching and seeing if he's in game shape.''


Paxton had surgery Feb. 5 to repair a herniated disk in his back and to remove a peridiscal cyst. The left-hander exited his final regular-season start, at Texas on Sept. 27 after one inning with what the Yankees said was a tight left glute muscle, then returned for three postseason starts.

After agreeing to a $324 million, nine-year contract, Cole heads a rotation that includes righty Masahiro Tanaka, Paxton and lefty J.A. Happ. Lefty Jordan Montgomery could be the fifth starter.

Hicks, a switch-hitting center fielder, is recovering from Tommy John surgery on his right elbow on Oct. 31. Cashman said he wants to evaluate his conditioning.

"I'm sure he feels he'll be game ready by Opening Day and I think that's possible,'' he said.


"If you're shooting for the DH role by OpeningDay, I think that's a possibility,'' Cashman said before saying Stanton's left field availability "is to be determined.''

Cashman said some players may arrive late because of travel and the first official session for pitchers, catchers and injured players could be pushed back a day to Saturday. Director of medical services Steve Donohue, director of sports medicine and rehabilitation Michael Schuk and head athletic trainer Tim Lentych are trying to prepare Yankee Stadium for workouts that normally take place at George Steinbrenner Field and the minor league complex in Tampa, Florida.

Both batting cages and bullpens will be used. The Great Hall under the stands on the first-base side will be the site of throwing programs. He is talking to opposing GMs about scheduling the three allowed exhibitions just before OpeningDay, and the Mets are the most likely opponent because of the short travel distance.

Cashman is preparing for a season of changes on short notice.

"If we have a game tomorrow,'' he said, "and your starter shows up and he has a temperature and all of a sudden has symptoms out of the blue right before the start, how do you adjust along the way?''
Report a correction or typo
Related topics:
sportsespnnewsaaron judgemlbgiancarlo stantonnew york yankeesaaron hicksjames paxton
Copyright © 2021 ESPN Internet Ventures. All rights reserved.
TOP STORIES
NYC issues 'strong recommendation,' stops short of mask mandate
Father, 2 daughters and niece killed in NJ crash
Kathy Griffin announces she has lung cancer
Father of 5 who was waiting out COVID vaccine dies from the virus
COVID Updates: Employers ratchet up pressure on unvaccinated
Friends, family, fans bid final farewell to Biz Markie on Long Island
Father of 3 heading home after 6-month battle with COVID
Show More
WATCH: Gunmen ride off on mopeds after 10 shot in Queens
MTA, NY Port Authority workers must be vaccinated or test weekly
Health care workers in NJ must get vaccinated or test, Murphy says
NJ's 5 tornadoes last week the 2nd biggest outbreak in 71 years
Adams kicks off general election campaign with de Blasio endorsement
More TOP STORIES News