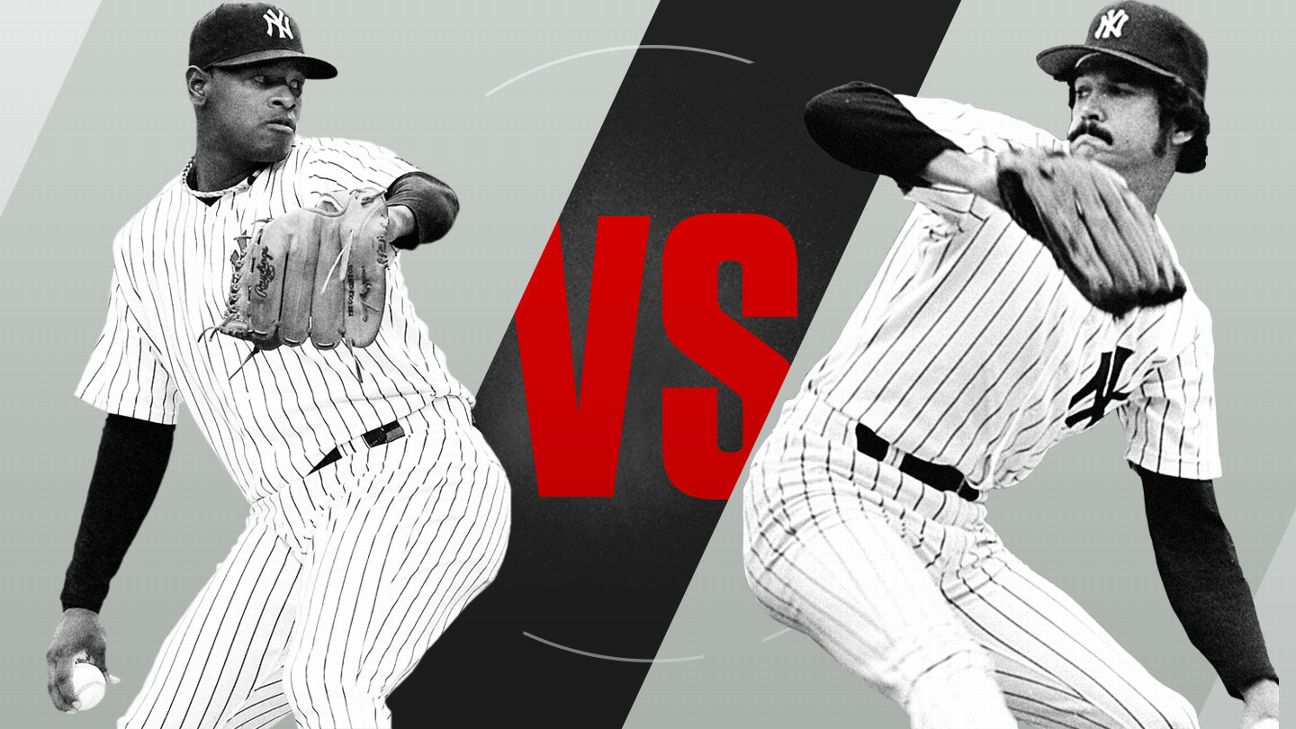 NEW YORK -- It was the day Bucky Dent became a household name.

Still, the shortstop's three-run, go-ahead homer over the Green Monster in a single-game playoff with theBoston Red Soxwasn't the only performance to go down in New York Yankees lore on Oct. 2, 1978.

Guidry believes Yankees fans won't have to wait quite so long to see his record broken.

"When he walks on that mound, he walks out there, and he just goes, 'OK, I'm Luis Severino. I'm here. Come get me,'" Guidry said, referring to the current ace of the Yankees' pitching staff. "He's so good, he can just say, 'Here, guys. It's a fastball, middle of the plate. Go ahead.'"

Forty years after Louisiana Lightning's historic season for the eventual World Series champions, the 24-year-old Severino is on pace to rewrite the team's record books. Entering his start Sunday night against the same rival franchise Guidry and Dent helped beat for that famed American League East title, Severino is on track to whiff 278 batters.

What's more, Severino's Yankees and this year's Red Sox have spent much of the first half separated for the division lead by mere percentage points, which means this anniversary year could well end with another Yankees pitcher setting another organizational strikeout record at Fenway Park on another season's final day. New York travels to Boston in late September for what could be a division-deciding three-game series. Similar to the 1978 pennant chase, the 2018 playoff push could be finalized on a single afternoon at Fenway.

Severino, for his part, said he isn't on strikeout watch.

"Nah, I don't pay attention to those," Severino said. "I'm just thinking about working and getting ahead in the count and try to throw my secondary pitches through the dirt. If they hit it, I get a ground ball. If they chase it, that's their problem."

To this point, 132 batters have had the problem of either swinging through or watching a called third strike on one of Severino's sharp breaking pitches or his blindingly quick fastball.

In three games, Severino has posted double-digit strikeout performances. One of those came in a May no-decision against the Red Sox in which he struck out 11 in a Yankees comeback win.

Severino was on the cusp of reaching 10 strikeouts in two other games, finishing, as he did Tuesday in Philadelphia, with nine. Following that scoreless outing, one of five he has posted in his 17 starts, his record improved to 12-2.

"I always feel great when Sevy's on the mound," Yankees manager Aaron Boone said. "The record in a lot of ways speaks for itself. The ability to get deep into games. He's been really good against the elite competition, it seems like, as well.

"He's putting himself in that conversation as one of the best in the game. There's no doubt about it."

Not only have Severino's pitches been impressive but his body language has caught attention too.

"I love his demeanor on the mound: no nonsense, no messing around," said former Yankees pitcher and current YES Network analyst David Cone, who struck out 222 batters as a Bronx Bomber in 1997. "Of course, his fastball's great. Everything's off of that."

Severino's fastball has been so overpowering so deep into games that no starting pitcher has come close to matching it. According to ESPN Stats & Information, Severino has thrown a major-league-leading 527 pitches of 98 mph or faster. Mets aceNoah Syndergaard's 285 are a distant second. Severino also has thrown 44 pitches of 100 mph or faster, with 12 of them coming Tuesday.

Among Severino's final pitches in that start was a 100.1 mph, seventh-inning fastball.

"Middle of the seventh, he's still throwing 100. Usually you face those guys, and they can only do it for one or two innings. He's got closer stuff," Yankees outfielder Giancarlo Stantonsaid. "He's got some of the best stuff in the game for 100-110 pitches. So it's going to be a tough day for the opposition when he's up."

Why does Severino's fastball stay lively even in later innings?

"I think it's the work," Severino said. "I work out. But I am starting to feel better as the games are going on."

The pitcher spent this offseason adding more running to his daily training regimen in hopes of boosting his in-game and in-season stamina. He ran 10 laps on an outdoor track for up to 30 minutes before beginning the rest of his workout.

While Severino contends that he has no strikeout goals this season, he is targeting one number: 200, as in 200 innings.

"That's a great number for a pitcher," he said. "Everybody wants to think about ERA and strikeouts and stuff like that, but for me, it's innings. If you get to 200 innings, you're having a good year."

Last season, when Severino fanned 230 batters-- tied with teammateCC Sabathiafor the third-highest total in team history -- he threw 193 1/3 innings, plus another 16 in the postseason. With 111 2/3 innings already this year, he's well on his way to reaching his goal.

"He's getting to the point in his career now where you don't have to think about [limiting] innings," Cone said. "He's past the point of being protected, like the young pitchers they try to protect."

Severino's fastball isn't his only swing-and-miss pitch. His main secondary pitch, his slider, has been effective, too. Per Statcast, Severino has had a higher spin rate and whiff percentage using the slider this season than at any previous point in his career.

His slider has been passing the eyeball test, too.

"He's starting to get a feel for it, not overthrow it as much as he has in the past. The less you overthrow it, the more it'll drop," Cone said. "It looks a little different from pitch to pitch. No two are the same.

"[I'm seeing] some funny swings, really out-in-front and lunging type swings. That shows me that the hitters just aren't picking it up. It's got a little different spin, a little different look to it. The key to me is if he can get side-to-side and downward tilt. He's starting to get that. Last year, it was more side-to-side, and now he's getting a little bit of both. That's the one you want."

Guidry built an All-Star career with the help of his slider, and he is impressed with Severino's.

"You see, he's got good control," Guidry said. "I threw hard, I had a great slider, but I had good control. And that's what he is, that's why he's so dominant."

One of Guidry's favorite stories from the 1978 season involves a typical pregame conversation he would have with New York's leadoff man that season, Mickey Rivers.

"Gator," Rivers would ask Guidry, "how many runs do you think you're going to need tonight?"

"And he'd go, 'I got that in my back pocket,'" Guidry said. "Because he was such a great leadoff hitter. He'd bunt, base hit, walk. But then in two pitches, he'd be on second."

From there, Rivers might get moved to third by a Willie Randolph bunt and then driven in on a Thurman Munson sacrifice fly or ground ball to the right side.

"Now, you got one cheap run. You manufacture runs, and that might be all I'd need," Guidry said. "That's how we played. But the whole team started to play like that, and that's why we won -- because we played that kind of baseball."

Sure, Severino's Yankees can win via the long ball. But like Guidry, the young starter has demonstrated a knack for not needing much help on the scoreboard. Since the start of last season, Severino has a major-league-best 24 games in which he has allowed one run or fewer.

Often around at Yankees spring training, Guidry has seen Severino up close throughout his up-and-down journey as a Yankee. Following earlier struggles with consistency and victories, Guidry gave the young right-hander some advice he has taken to heart.