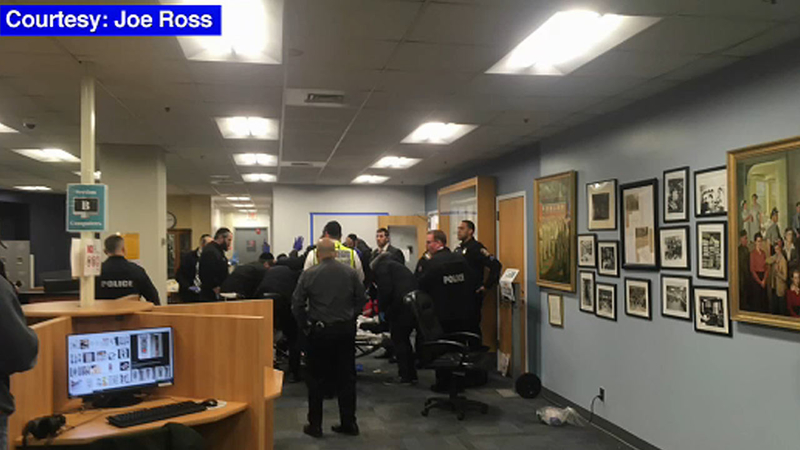 SPRING VALLEY, New York (WABC) -- A woman has died after she was stabbed repeatedly inside a library in Spring Valley on Tuesday afternoon.

The incident was reported at the Finkelstein Memorial Library on Chestnut Street just after 2 p.m.

The 52-year-old female security guard was sitting at her post on the third floor when with no warning, a man attacked her with a knife.

When the victim screamed she couldn't breathe, onlookers attempted CPR as two library patrons wrestled the attacker to the floor so police could take him away.

Witnesses said the attack was horrific to watch and the man had a smirk on his face.

The woman was rushed to the hospital where she was pronounced dead.

"It's just a profound loss for us, it really really is," said the victim's friend Christine Ball.

It is not yet clear if the man knew the security guard or if the attack was random.

"It's just unbelievable, this is a place where people bring their children and family and they sit and enjoy the library," the victim's friend Oney Barron said. "This is a place where it should not be where we're going to need additional security just to protect us."

The suspect, a 25-year-old Spring Valley resident, was taken into custody. The investigation is ongoing.

"A security guard, keeping others safe was viciously stabbed at the Finkelstein Memorial Library in Spring Valley, and she later died of her injuries. I am praying for the victim's family in their time of grief. Many in our community visit the Finkelstein Memorial Library, and it's a place I have taken my own children and have always felt safe. I am extremely upset over this act of violence that incited more fear and chaos in our close-knit community.

I will be working with the library and State officials to make sure we get our libraries whatever they need for security moving forward. Since the Monsey stabbing, I have secured State funding for the Town of Ramapo so it will be outfitted with security cameras and license plate readers."