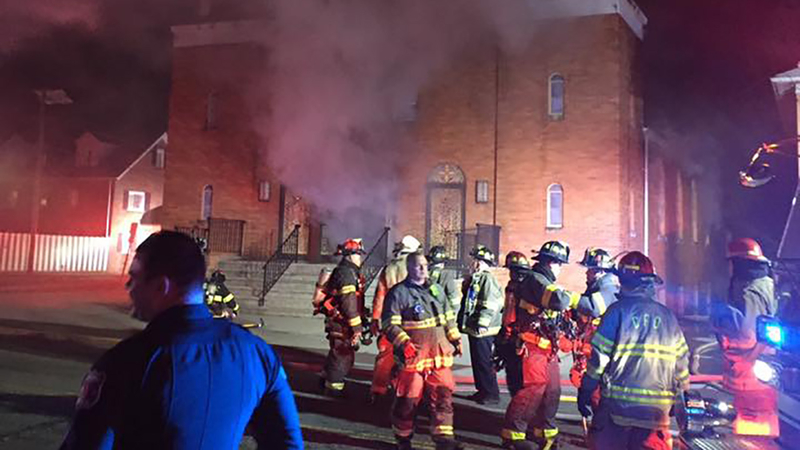 CARTERET, New Jersey (WABC) -- Just weeks before Christmas, a fire destroyed a historic church in New Jersey that has been part of the community for more than six decades.

The three-alarm fire started around 10 p.m. and gutted St. Mary's Ukrainian Catholic Church, of the Byzantine Rite, which was constructed on Roosevelt Avenue in Carteret in 1954.

"This beautiful historic structure is part of Carteret history, and we are praying for the parishioners of this fine church and hoping for the best," Mayor Dan Reiman wrote on Facebook.

The sturdy brick exterior still appears intact, but officials say the inside is nearly a total loss after the devastating overnight fire. Everything was damaged, from the pews to the stained glass windows to the roof.

It is believed the blaze may have started in the sanctuary of the church, but thankfully, no one was inside at the time.

Fire and construction officials remained at the scene Wednesday, and a steady stream of neighbors and parishioners have been stopping by to express what a loss this is for the community.

The church served not only as a house of worship, but also as a home to many fraternal and cultural organizations.

The cause of the fire is still under investigation, but at this point, authorities do not suspect anything suspicious. There were no smoke detectors in the church, which gave the fire a head start and allowed it to burn for about an hour before being discovered.

Several local churches in the area have offered to take in the parishioners, especially with the holidays coming in a few weeks. In the meantime, the mayor says anyone wanting to make a donation to help the church get back on its feet can donate to the Carteret Business Partnership. A church fund has also been established.