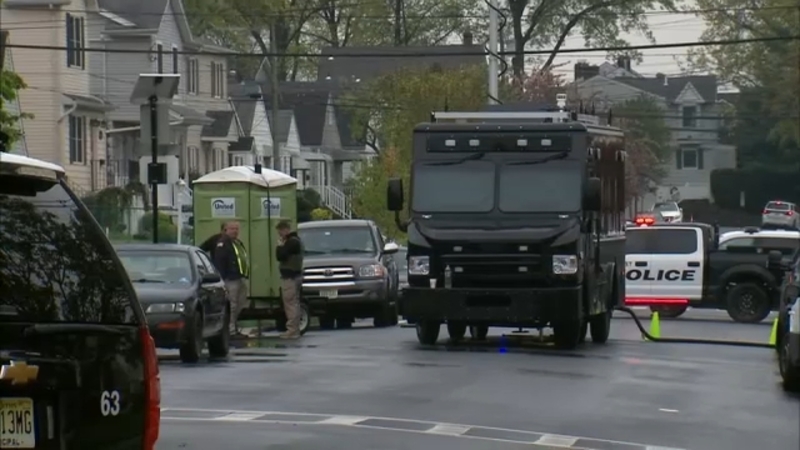 LYNDHURST, New Jersey (WABC) -- Residents in one New Jersey town spent nearly a full day confined to their homes as police worked to get an armed man barricaded inside a house to surrender.

The situation played out on Thomas Avenue between Chase Avenue and Eighth Street in Lyndhurst, where authorities were called to a report of man using a flamethrower outside around 4:15 p.m. Tuesday.

The area was locked down, with police unable to grant requests to re-enter homes.

SWAT units were geared up and ready to go as negotiators worked around the clock to get the 51-year-old suspect to surrender. They knew Robert Condit had a variety of legally purchased guns inside the home and was in the house with his mother and grandmother.

"Yesterday, we responded to the home, where we were going to executive a resolution order to seize weapons," Lyndhurst police Det. Lt. Vincent Auteri said. "At that time, the officers were greeted by the man. He refused to give them access. He then barricaded himself inside the home."

The situation ended peacefully around 1 p.m. Wednesday, with the all clear given and the lockdown lifted.

His mother and grandmother had been safely removed from the home earlier.

"We cannot thank the community for their long-standing patience and cooperation throughout this difficult situation," police said. "Thomas Avenue between Chase Avenue and Eighth Street will remained closed for the foreseeable future, however, residents may now access their homes."

Units had surrounded the area, beginning a long night for authorities as waited it out.

"They told me that there was something going on on Thomas, and they asked if I needed to get out of my house," neighbor Harlow Skalwold said. "And I said, 'No, I can stay here,' and they said, 'Just shelter in your house, in the back of your house.'"

Residents were encouraged to shelter in place the entire time, though they stressed there was no threat to public safety.

"At one point when I asked if I could exit or vacate, she told me no, and when I turned around I saw flames in the air," another neighbor said.

Authorities say rumors, reports and comments on social media regarding shots being fired were false, but they did fire gas canisters into the home overnight between around 1 a.m. and 2 a.m.

Arrangements were made to allow those students living in the area to be granted permission to be late for school, as the Lyndhurst Board of Education has been made aware of the ongoing situation.

Between 50 to 75 households were impacted by the standoff.

Police say the suspect does not have a history of any police incidents, so know one knows what caused him to barricade himself inside the home.

But after 21 hours, the situation ended peacefully and the family of the suspect was thankful.

"When the family of the suspect thanks you and thanks police at the end for the outcome, you know everything went the way it was supposed to go," Lyndhurst police Capt. Michael Carrino said.