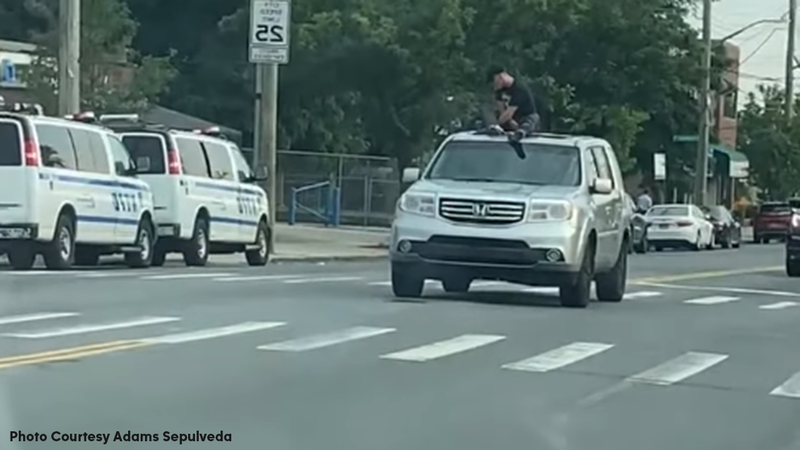 THROGGS NECK, Bronx (WABC) -- An armed man was taken into custody after standing on an SUV outside a Bronx police precinct and holding officers at bay.

The scene played out at the 45th Precinct in the Throggs Neck section.

Authorities say the man, described as emotionally disturbed, arrived at the precinct just after 7:30 a.m. Thursday.

He displayed a gun and climbed on top of the vehicle, sparking a tense situation.

"That individual emerged from sunroof with beer in one hand and firearm at the other," 45th Precinct Commanding Officer Captain Isaac Soberal said. "Officers immediately gave commands for the man to drop what he was holding. The man appeared somewhat disoriented and did not comply. ESU was called and a perimeter was established. Officers began clearing the area to establish a frozen zone."

Officers talked to the man, who at one point fired a shot.

"ESU officers approached the individuals vehicle from the rear in an effort to begin a dialogue," NYPD Special Operations Captain Christopher Giordano said. "The man was not very responsive and did not offer any explanation for what he was doing or why he was there. At some point, the man was holding a firearm and discharged a round, which struck a nearby unoccupied police van."

He then dropped the gun and was taken into custody.

"The man appeared to be startled by the gun going off and laid back on the roof of the SUV," Giordano said. "Officers from the observation post saw him drop the gun into the vehicle through the open sunroof. ESU officers once again approached the vehicle and took the man into custody without incident."

ALSO READ | Man with Alzheimer's forgot he was married, fell in love with his wife all over again
EMBED More News Videos

Peter looked at Lisa and asked if she would marry him. What Peter didn't remember was that they were already married.

No injuries were reported, and the man was taken to Jacobi Hospital.

"Today is a very good day," NYPD Special Operations Chief Harry Wedin said. "There was a tense situation here this morning involving an individual armed with a gun experiencing some type of personal crisis. That individual taken into custody without incident. No officers or innocent bystanders were injured. The men and women of ESU train for this exact outcome every single day. I want to commend them."

Police recovered the gun and also searched the SUV on which the man was standing.