"Instead of moving America forward, it feels like President Biden and his party have sent us back in time," said Reynolds.
CNNWire 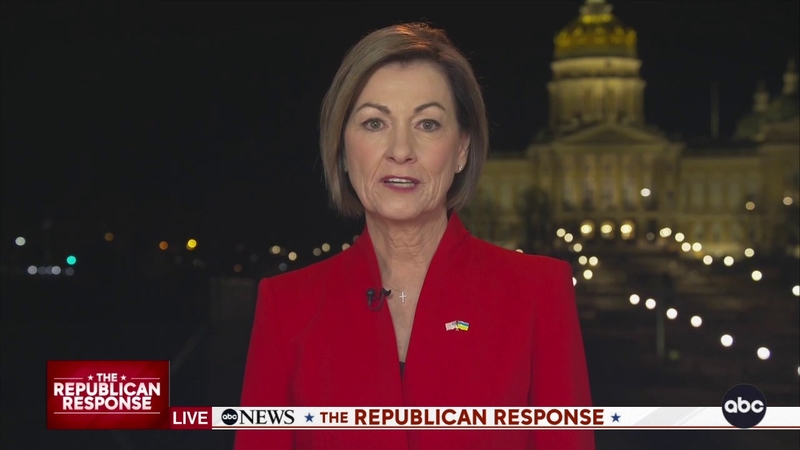 Watch the Republican response to State of the Union

DES MOINES, Iowa -- Iowa Gov. Kim Reynolds went after President Joe Biden and the Democratic party over rising inflation and what she described as a flawed approach to foreign policy in the Republican response to President Joe Biden's State of the Union address on Tuesday evening.

"Instead of moving America forward, it feels like President Biden and his party have sent us back in time," Reynolds said.

On foreign policy, Reynolds said, "Weakness on the world stage has a cost and the President's approach to foreign policy has consistently been too little too late."

"We can't project strength abroad if we're weak at home," she said, charging that Biden and his party "have spent the last year either ignoring the issues facing Americans or making them worse."

Watch President Joe Biden's full remarks from his first State of the Union address as he vowed to check Russian aggression in Ukraine and "build a better America."

Referencing the impact of high inflation at home, she said, "The Biden administration believes inflation is a 'high class problem,' I can tell you it's an everybody problem."

The speech gave Reynolds a prominent national platform to speak to the country and offer up a critique of the Biden administration agenda. It comes as Republicans work to make their case to the American public ahead of pivotal midterm elections that will determine which party controls the House and Senate.

It's Washington tradition for the party locked out of power at the White House to pick a rising star within their ranks to give a rebuttal speech following the President's annual State of the Union. The nationally televised speech serves as a way to counter-program and draw a contrast.

At the same time, the format -- the rebuttal is typically delivered straight to a camera -- can prove challenging and comes with a far less dynamic backdrop than the House chamber, where presidents deliver the State of the Union and are greeted by cheers and applause from members of their party.

Reynolds has made a name for herself as a proponent of limiting government mandates amid the pandemic and Republican congressional leaders praised her handling of Covid-19 when they announced she would deliver the GOP response.

President Biden delivered his first State of the Union address on March 1, 2022.

Reynolds signed legislation into law last year that blocks mask mandates from being implemented in K-12 schools and prohibits cities and counties from requiring facial coverings in businesses. She also signed a bill into law last year that grants unemployment benefits to those who lose their jobs because they refuse to get vaccinated against Covid-19.

Biden is confronting challenges on a number of fronts, including facing some of the lowest approval ratings of his presidency just months before the critical upcoming midterm elections.

The State of the Union also unfolded under the looming threat of the biggest military crisis in Europe since the Cold War as Russia continues its assault on Ukraine after launching an unprovoked attack on the nation.

While Democrats hope the State of the Union address will give Biden, and by extension their party, a boost, Republicans are looking to use the opportunity to spotlight what they see as the major flaws and weaknesses in the President's agenda and his tenure to date.