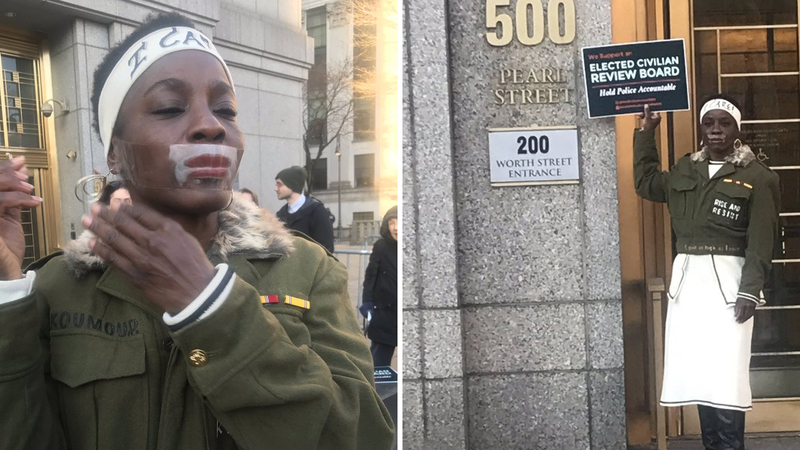 NEW YORK (WABC) -- The woman who climbed the Statue of Liberty last July 4th was sentenced to probation in Lower Manhattan Tuesday.

Patricia Okoumou, 45, put tape on her face before entering the courthouse to protest limits on her freedom of expression.

Judge Gabriel Gorenstein ordered her to remove it before sentencing could begin, which she did.

"I do not need probation, and I do not belong in prison," Okoumou told the judge. "I am not a criminal."

The sentencing was observed by US Attorney Geoffrey Berman, who was in the courtroom

Okoumo made the climb to protest the separation of families at the southern border, and federal prosecutors argued she needed to be incarcerated to deter future lawbreaking after she was arrested again during a climbing protest over immigration in Texas.

But Okoumou's lawyers countered that her protests create no danger and that jail time for a Statue of Liberty protest would be both unprecedented and would prevent her from getting a job.

At a bail revocation hearing earlier this month, Gorenstein ordered home detention with an electronic bracelet to monitor her whereabouts. He also told her to seek employment.

Okoumou was convicted in December of trespass for scaling the pedestal of Lady Liberty and refusing to come down.

"My work here will continue as far as my activism highlighting the atrocity of this administration," Okoumou said after her last court appearance.

A judge said in her last hearing that he was concerned that she had a financial need for publicity and that in order to get donations, she needed to get attention by breaking the law.