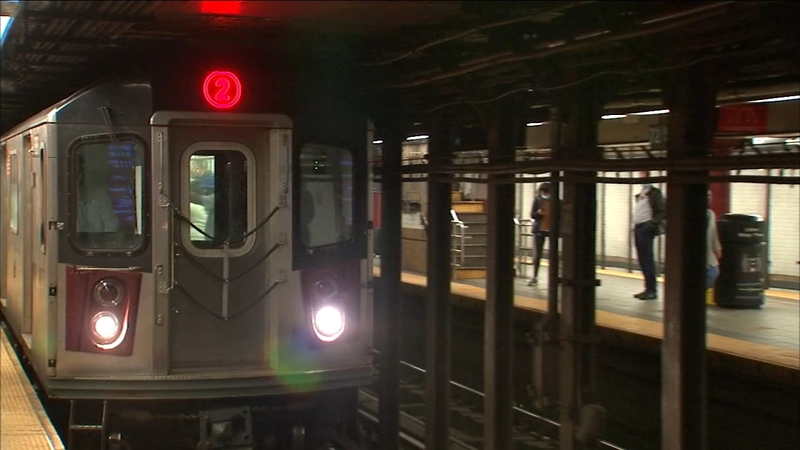 NEW YORK CITY (WABC) -- The MTA and Transit Workers Union are calling on New York City to deploy additional NYPD officers and mental health resources to the subway system following a spate of recent attacks on transit workers, one that they say Mayor Bill de Blasio is denying exists.

That includes three incidents on Wednesday and two more Thursday, including one in which a conductor was knocked unconscious and another where an off-duty worker was slashed in the face and remains in critical condition.

The conductor had smelled cigarette smoke on a 2 train between 238th Street and Nereid Avenue in the Wakefield section of the Bronx around 1:30 p.m. Thursday.

He was opening the cab door to investigate when the suspect kicked the door back at him and proceeded to strike the 39-year-old victim in the head, knocking him unconscious.

He was transported to Jacobi Hospital in stable condition.

As for the off-duty worker, 52-year-old Gerard Sykes, a conductor who was off duty and not in uniform, was on the J train at around 11:20 p.m. Wednesday near Fulton and Crescent streets when a man passing through train cars slashed him with a box cutter.

He was cut from behind his ear to his left eye, and he was rushed to Jamaica Hospital, where he underwent two emergency surgeries.

"People are scared," the victim's aunt, Cassandra Sykes, said. "They are scared. Now it's happening to your workers."

"He's got a long road of recovery ahead of him, but fortunately it could have been a lot worse," Foye said.

Eyewitness News has learned that while the employee is still in the ICU at Jamaica Medical Center, he is no longer sedated and should soon be able to talk to MTA officials about what happened.

"This tragic incident underlines once again the critical need for an increased and engaged police presence in our system at this pivotal moment in the city's history," Foye said. "People need to be safe, and they need to feel safe, while riding the subways, buses, and commuter rails - period. Or they won't come back to transit, which means not coming back to NYC."

Foye and Feinberg expressed concern for the tens of thousands of other frontline employees working in the transit system.

"Our thoughts and prayers are with Mr. Sykes and his family," Feinberg said. "This was yet another horrifying attack one of New York City's Transit heroes. These are true public servants, the men and women who have been carrying the city on their backs for the last year. And it is completely unacceptable that these men and women show up to work day in and day out, and they're attacked as they're serving the city of New York."

Feinberg also reiterated her repeated call on city government to provide more police and mental health resources to the system, particularly in light of suggestions made by Mayor Bill de Blasio that the city has pulled police officers that were surged into the transit system after several recent incidents.

"The mayor has gone out repeatedly and said that crime is down in the system, that it is at an all-time low, and no one wants that to be the case more than me, but that is just not sharing the full story," she said. "The full story is that given where ridership is, crime should be lower. Of course this system is safe for the vast majority of people who are using it, but it is not as safe as it could be, and it is not as safe as it should be - particularly for our workforce. And the men and women of New York City Transit deserve better."

De Blasio's controversial comments raised eyebrows, as he seemed dismissive of any increase in subway crime and stated anyone who would be concerned isn't a "real New Yorker."

"Let's get real, let's tell people it's safe because it is safe and it's part of our recovery," he said. "My children take the subway all the time. If you say to one of my kids, 'Oh, you shouldn't go in the subway, it's not safe,' they would laugh you out of the room. They would tell you clearly can't be a real New Yorker because they couldn't think of life without taking the subway."

He doubled down on that sentiment on his radio show Friday, blaming Governor Andrew Cuomo and the MTA.

"What's happening right now is clearly at the instruction the governor," he said. "The MTA leadership is fearmongering. I've never seen anything like it...People constantly saying something isn't safe, when it is."

An off-duty MTA employee was slashed across his face while riding the subway through Brooklyn on Wednesday night.

"We are in a critical moment in New York's recovery, when we need people to come back to the city and come back to the transit system," Feinberg said. "Once again, we ask for the city to step up and put the additional resources we have asked for into the system. And yet instead, day after day, City Hall pretends that we don't have a problem, and that we just pretend this is not happening, that we look the other way and pretend our transit workers aren't being assaulted. We aren't going to do that."

Utano made a graphic appeal for more mental health and police resources in the transit system on behalf of his union's members.

"We just went upstairs and we saw one of our members lying there, and he's all bandaged up, he's on a respirator, he's all sliced up, and then you have a mayor that says, 'Hey, you know, they're going overboard, there's really no problem.' There is a problem," he said. "We need the police down there and we need the homeless outreach people out there. But the mayor also needs to fix the shelters, because you're going to take the homeless out of there, and you're going to put them in a shelter where they don't feel safe. They need police, they need medical people, they need to get help. We need to get these people help, God, this is America. I've said this over and over again. There should not be a homeless problem here. There should not be a homeless problem. They should be taken care of."

He said it's on de Blasio's shoulders to fix it.

The NYPD announced Friday it is deploying auxiliary officers to the city's 20 busiest subway stations, which Feinberg said was appreciated.

"We are grateful that Commissioner Shea has heard our concerns and agreed to deploy more auxiliary police officers to the top 20 busiest subway stations," she said. "We know our employees and customers agree: 87% of riders say that seeing a visible presence in our system is very important to them. The addition of these officers is a good step forward - but make no mistake more needs to be done to ensure the system comes back, and in turn the city comes back. We know that in order for more and more people to return to mass transit they need to feel safe. That's why we continue to call on the city to add additional full-time police officers and mental health resources to the subway system immediately."