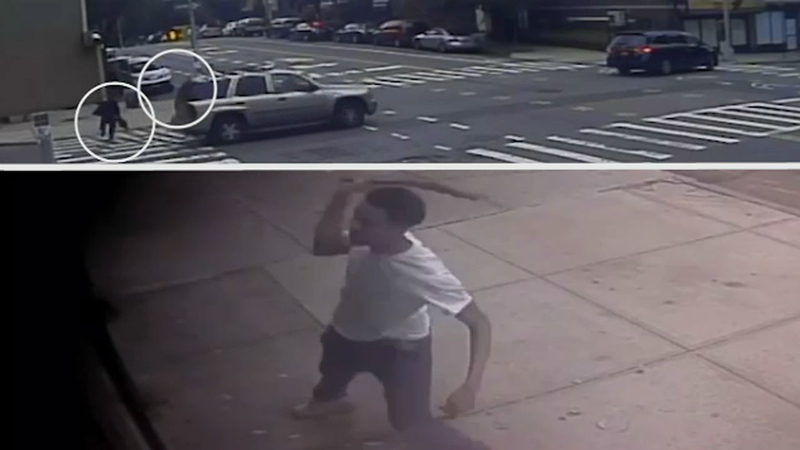 CROWN HEIGHTS, Brooklyn (WABC) -- There is a growing sense of alarm after another act of anti-Semitic violence in Crown Heights on Monday.

The suspect is facing a series of charges, including assault as a hate crime, in the seemingly unprovoked attack on Empire Boulevard.

As the victim attempted to cross the street, he was confronted by a man waving a large stick. In an instant, he was chased back across the street and ran for his life to the dry cleaner on the corner.

There, he was beaten so badly that the suspect's stick broke before he took off down the sidewalk.

Meir Junik and his son watched the incident unfold and took off after the suspect who was soon apprehended in a park and arrested.

The victim was treated and later released from the hospital.

"He was here, he gave me a hug and he was like, 'Thank you for saving my life,'" Junik said. "I mean he could have, God forbid, hurt him worse or could have killed him, in his head or something. I mean, he was a swinging like a madman."

There were 11 anti-Semitic assaults in New York State last year, an increase of 90 percent.

There have already been 12 so far this year -- nine of them in Brooklyn.

"We don't want to see any kind of trend of anti-Semitic assaults or hate in New York City or beyond," said Evan Bernstein with the Anti-Defamation League. "And the fact that this is looking like it's almost becoming normalized is incredibly disturbing to us."

Bernstein is urging all of New York's communities to be extremely vigilant.