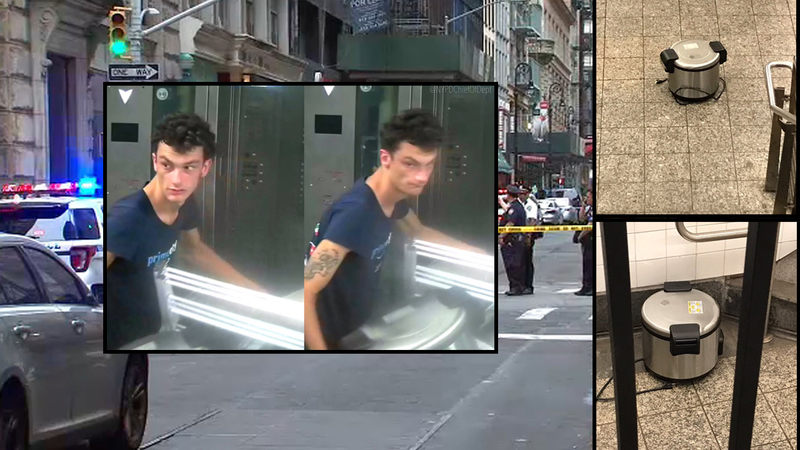 NEW YORK (WABC) -- The NYPD has released a photo of a person of interest wanted for questioning in suspicious package scare at the Fulton Street subway station and near West 16th Street and 7th Avenue on Friday morning.

Two NYPD counterterrorism officers were approached just after 7 a.m. by a subway passenger who noticed the suspicious items at the Fulton Street station.

The items turned out to be rice cookers. One was placed on the mezzanine level and another on the 2/3 platform, placed 25 feet apart from each other.

The incident disrupted subway service for about an hour starting at 7:00 a.m. Friday as the bomb squad investigated. One train was evacuated at Fulton Street.

Police gave the situation the "all clear" around 8:20 a.m.

The NYPD’s Bomb Squad has cleared both devices found earlier this morning at Fulton Center.

Thank you @NYPDCT for the quick response and everyone who kept calm through this.

An investigation is ongoing. https://t.co/CJJA8jdu9i

"This was a serious incident and we took it very seriously," MTA chief Andy Byford said.

All subway service has since been restored. Riders should expect residual delays.

The "person of interest" was identified as Larry Griffin of West Virginia, a police source told ABC News. He's described as a white male in his 20s or 30s with dark hair and a shopping cart. He was seen on surveillance video placing the rice cooker on the mezzanine and then on the platform.

The NYPD is looking to locate and identify this individual who’s wanted for questioning in regard to the suspicious items inside the Fulton Street subway station this morning in Lower Manhattan. Contact @NYPDTips at #800577TIPS with info — alert a cop or call 911 if you see him. pic.twitter.com/OFTJgPv2sw

The NYPD believes they have identified the person in this photo and are looking to speak to him. He is not in custody as of this very moment.

"Why is he placing them there and what is the purpose of that," NYPD Deputy Commissioner John Miller said. "Not a suspect, but certainly someone we want to interview."

Anyone with information should contact @NYPDTips via Twitter or by calling 1-800-577-TIPS or call 911 if you see him.

WATCH THE FULL PRESS CONFERENCE BY POLICE AND TRANSIT OFFICIALS

Governor Cuomo suggested during a radio show Friday morning that the cookers were deliberately left there.

"The suspicion is they were placed there to suggest that they were electronic devices and possible bombs," Cuomo said.

Detectives are currently looking for video of the 16th Street/7th Ave. location to determine whether the same man placed the cooking device there as well.