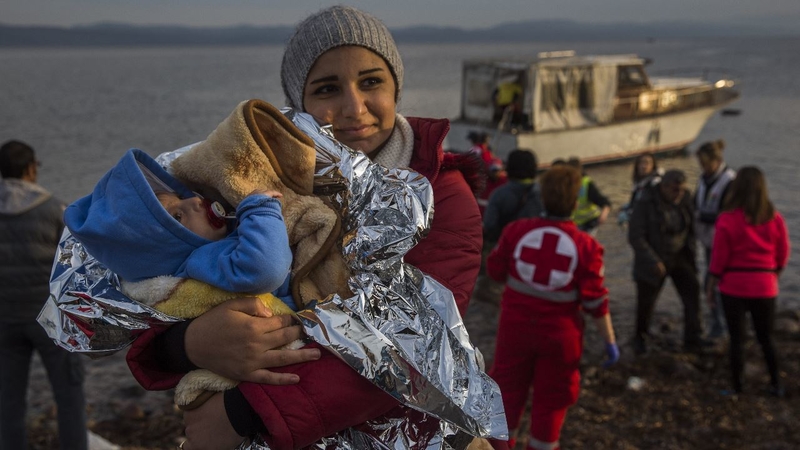 In response to the calls from governors to prevent Syrian refugees from coming to their states, Lavinia Limon, president and CEO of the U.S Committee for Refugees and Immigration, said under the Refugee Act of 1980 governors cannot legally block refugees from settling in their communities.

States looking for more info (1): NJ's Christie tells the Washington Post he has serious concerns that the administration is not vetting them thoroughly but does explicitly state that he supports their entry with stricter vetting.

Here's a more detailed look at where some states stand:

ALABAMA
Fellow Republican Gov. Robert Bentley announced Sunday that he would refuse Syrian refugees relocating to the state, saying: "I will not stand complicit to a policy that places the citizens of Alabama in harm's way." Bentley's news release said the Alabama Law Enforcement Agency was diligently working with federal officials to monitor any possible threats. There has been no credible intelligence of terror threats in Alabama so far, according to the governor's office.

ARIZONA
Gov. Doug Ducey is joining a growing list of Republican governors calling for an immediate halt to the placement of any new refugees from the Middle East. And Ducey made it clear that the state is within its legal rights to do so, saying that he is invoking the state's right under federal law to immediately consult with U.S. officials on any new refugee placements. He also wants Congress to change the law to give states more oversight over refugee placement. Ducey says national leaders must react to protect its citizens.

CONNECTICUT
Gov. Dannel P. Malloy says Connecticut will continue to accept refugees from Syria despite the Paris terror attacks. The Democrat told a TV station in Connecticut Monday the state is committed to accepting the refugees and believes background checks could easily be performed.

DELAWARE
Democratic Gov. Jack Markell is standing by his support for President Obama's decision to provide asylum for Syrian refugees in the United States, despite Republican calls not to accept refugees in Delaware. The head of the Delaware Republican Party, along with state Sen. Colin Bonini, a GOP candidate for governor, urged Markell on Monday not to accept Syrian refugees in the wake of terrorist attacks in Paris. Markell responded that former Republican President Ronald Reagan was committed to welcoming those seeking safety from fear and persecution.

FLORIDA
Gov. Rick Scott is calling on Congress to block attempts by the Obama administration to relocate 425 Syrian refugees to Florida. The Republican governor on Monday wrote a letter to congressional leaders that asked them to take "immediate and aggressive action" to prevent the relocation of Syrian refugees without an "extensive evaluation" of the risk the refugees may pose to national security.

ILLINOIS
Gov. Bruce Rauner joined the growing list of Republican governors who announced they want to prevent Syrian refugees from relocating in their states. In a statement issued Monday, Rauner said the state will "temporarily suspend accepting new Syrian refugees and consider all of our legal options pending a full review of the process by the U.S. Department of Homeland Security."

IOWA
Saying he wants to protect residents of his state in the wake of terrorist attacks in Paris, Gov. Terry Branstad acknowledged that governors might not be have the legal authority to prevent the Syrian refugees from relocating to their states because "this is a federal program." Still, the Republican said he wants more information from the federal government about where people are being placed and the vetting process.

INDIANA
Republican Gov. Mike Pence announced Monday that he was ordering state agencies to suspend the relocation of any more Syrian refugees to the state until he received assurances from the federal government that proper security measures had been taken.

LOUISIANA
Gov. Bobby Jindal - a GOP presidential contender - said he wants more information from the White House "in hopes that the night of horror in Paris is not duplicated here." Jindal sent a letter to the White House on Saturday, demanding to know how many Syrian refugees have been resettled in his state. He also wants to know the extent of background screening before Syrians entered the U.S. United States as well as what monitoring would be done once the refugees make it to Louisiana.

MAINE
Gov. Paul LePage said it is "irresponsible" to allow Syrian refugees into the country in the wake of the terrorist attacks in Paris. The Republican governor, who said he does "not know for certain" if Maine has any Syrian refugees right now, plans to point out in a radio address on Monday that one of his first actions as governor was to prevent Maine from serving as a "sanctuary state" for people living in the country without legal permission.

MASSACHUSETTS
Gov. Charlie Baker says he's opposed to allowing more Syrian refugees into Massachusetts in the aftermath of the terrorist attacks in Paris and that he wants to know much more about the federal government's vetting process before allowing them into the state. Democratic Boston Mayor also says he wants to know about how the federal government screens refugees.

MICHIGAN
Gov. Rick Snyder had bucked many fellow Republican leaders by welcoming refugees to Michigan, which has a large Arab-American population. But he said Sunday that the state is postponing efforts to accept refugees until federal officials fully review security procedures and clearances. Snyder said that while he is proud of the state's history of immigration, its "first priority is protecting the safety of our residents."

MISSISSIPPI
Gov. Phil Bryant said Monday that he's trying to find out if there are any plans by the federal government to relocate any Syrian refugees in the state and if there are the Republican said he will "do everything humanly possible" to stop it.

NEW JERSEY
Gov. Chris Christie says he's opposed to any Syrian refugees entering the country - even infant orphans. Christie's comments came during conservative host Hugh Hewitt's radio show. They were a complete reversal from September, when the Republican presidential contender said U.S. should "play their role" in taking in refugees without committing to a specific number after a photograph of a dead migrant child humanized the migrant influx.

NEW YORK
Gov. Andrew Cuomo isn't commenting on a request from a New York congressman and a state assemblyman that he prevent Syrian refugees from being placed in the state. U.S. Rep. Chris Collins and Assemblyman Christopher Friend, both Republicans, cited the threat of terrorism in calling on Cuomo to reject additional refugees. A spokesman for Cuomo, a Democrat, declined to comment.

OHIO
A spokesman in Ohio Governor John Kasich's gubernatorial office, Jim Lynch, said governor doesn't believe the U.S. should accept additional Syrian refugees because security and safety issues cannot be adequately addressed. Lynch said Kasich is writing to the president to ask him to stop, and to ask him to stop resettling them in Ohio. He also said the administration is also looking at what additional steps Ohio can take to stop resettlement of these refugees.

TEXAS
Gov. Greg Abbott on Monday ordered Texas' refugee resettlement program not to accept any more Syrians in the wake of the Paris terrorist attacks. In a letter to Obama, the Republican also urged scrapping federal plans to accept more Syrian refugees into the country as a whole. He said the federal government can't perform "proper security checks" on Syrians.

VERMONT
Vermont Gov. Peter Shumlin says other governors who say they won't allow Syrian refugees into their states are "stomping on the qualities that make America great." Shumlin says there is an extensive screening process in place for refugees. Since 1989 about 7,000 refugees have been resettled in Vermont, and while none of them are from Syria, there are plans to settle a small number in the state during the current fiscal year.

WASHINGTON
Gov. Jay Inslee says Washington will continue to be a state that welcomes those seeking refuge from persecution, regardless of where they come from or the religion they practice.

WISCONSIN
Gov. Scott Walker said in September that the United States should not take in any more refugees from Syria and now, in the wake of the terrorist attack in Paris, Republican leaders of the Wisconsin state Assembly are saying the same thing. They're circulating a letter they plan to send to President Barack Obama's administration saying they don't want any Syrian refugees.