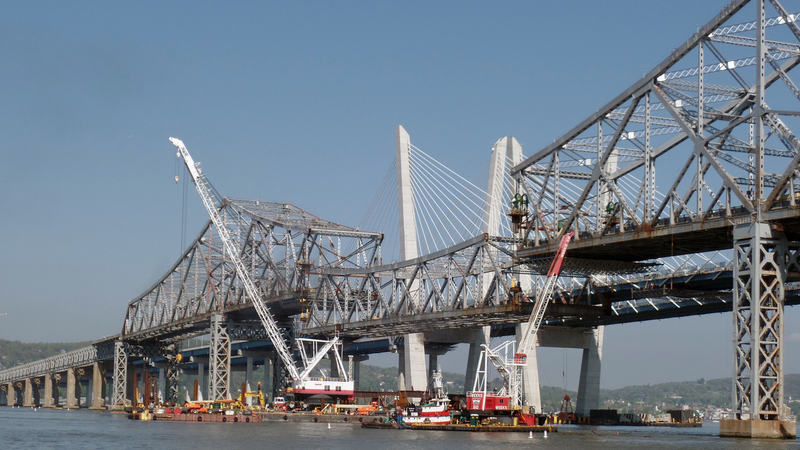 TARRYTOWN, Westchestser County (WABC) -- Crews have begun the delicate task of removing the superstructure of the old Tappan Zee Bridge, with special cranes lowering part of the center span that weighs 10 million pounds onto a barge.

The bridge was retired last fall when the replacement Mario M. Cuomo Bridge opened. For months, sections of roadway near the shore on either side of the Hudson River have been removed. The next phase will see demolition of the cantilever bridge, which has been cut into five sections.

"New York is leading the nation in rebuilding and reimagining our infrastructure so we can meet the demands of the fast-paced, 21st century economy," Cuomo said. "For decades, the Tappan Zee Bridge was a symbol of government incompetence and procrastination. But today's lowering of the main span of the old bridge marks the critical progress we have made. The new Mario M. Cuomo Bridge is critical to the growth and sustainability not only of the region, but of the entire state as we build a better, stronger New York."

The 2,415-foot main span of the Tappan Zee Bridge will be removed in five separate operations, the first of which began overnight on Monday. Eight hydraulic strand jacks are lowering the 4,750-ton suspended center span onto a barge to be transported offsite for further disassembly.

The steel will be cleaned and used as artificial reefs on Long Island.

The four other operations are scheduled to take place in the coming months. Barge-based cranes will remove two cantilever truss sections, while the two anchor spans will be lowered onto barges with the assistance of strand jacks. After the main span dismantling, the "I Lift NY" floating super crane will assist with the removal of the main span's steel support structures. The main span removal operation is expected to be complete by late fall.

In the meantime, construction continues on the new $4 billion, twin span bridge.

Currently, all traffic is being routed onto what what will eventually be the Rockland County-bound span. The second, Westchester County-bound crossing is scheduled to open before the end of the year.