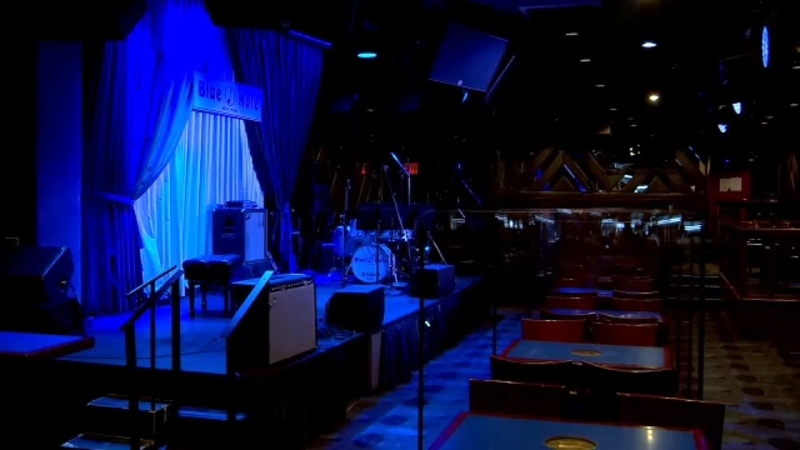 NEW YORK CITY (WABC) -- Jazz may have been born in New Orleans, but for more than a century, jazz clubs have been a vital part of New York City's entertainment scene.

Those clubs have been closed during the coronavirus pandemic, along with almost all of the city's other live venues. But now, they are coming back to life.

The Blue Note opens Tuesday with its first live show, featuring pianist Robert Glasper, after what the club's owner calls "the biggest challenge" he's ever faced.

"We're been closed for so long," Steve Bensusan said. "We've been wanting and praying for when we can come back."

Inside this temple of jazz, the silence has been deafening. But for those who worship at the altar of this music, spring has been a season of renewal as this club gets ready to welcome patrons again.

"We're opening at only 60% capacity," Bensusan said. "It's very comfortable and spaced out. Either tables will be six feet apart or we'll have plexiglass barriers in between the tables."

The club's jazz festival will extend to Capital One City Parks Foundation SummerStage in Central Park, where jazz trumpeter Chris Botti will play on Sunday.

"First of all, I hope I'll remember how to play music," he joked.

After half a century of playing, a decade and a half at the Blue Note alone, going so long without performing live came as a shock to Botti.

"Because I've given my whole life to have this opportunity," he said.

This summer marks 40 years since Botti played another show that he'll never forget.

Now, he's got another date with history.

"I'm kind of without words to express how important this is for me," he said. "And for everyone to celebrate the comeback of New York and music and the arts and hopefully tourism and all that stuff."

Summerstage is one of the best venues to see a concert, and the Blue Note is another. So the combination of the two in one jazz festival is a powerful draw.