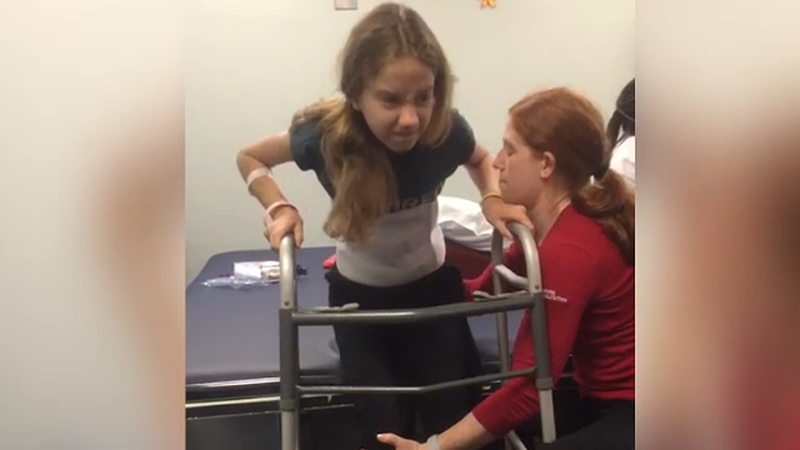 In a recent episode of "The Good Doctor," surgeons raced to help a paralyzed football player get back on to the field again.

Doctors at NewYork-Presbyterian Weill Cornell Medical Center are doing just that in real life -- and in even rarer cases of spinal injury.

At the age of 13, Matilde Anacoreta was sailing both on the slopes and on her surfboard. But weeks later, she suffered an aneurysmal bone cyst.

"When I fell, it wasn't like my legs, like stopped feeling them," Anacoreta said. "I stopped feeling like my feet and that feeling gradually came up. I was lucky that it happened at home and not anywhere else."

Because of its advanced stage, the benign tumor was extremely rare.

"This presented in a relative catastrophic manner, in that there was a moment when Matilde fell to the ground and couldn't really move her legs feel anything up to about this area," said Dr. Michael Virk, a neurosurgeon at Weill Cornell.

On Monday's episode of "The Good Doctor," a high-profile football player is paralyzed after suffering a catastrophic spinal injury.

Releasing the compression of the spine to reverse paralysis is the same challenge neurosurgeons at Weill Cornell faced in Anacoreta's case.

"We had to basically do this as a multiple-step operation, where we were not only fixing the structural integrity and decompress the spinal cord, and give her the optimal chance for recovery," Dr. Virk said.

She underwent two surgeries, five to six hours each, to completely remove the tumor and had a titanium cage and twelve screws inserted to support her spine. She began to regain her mobility again about a month later.

"It did," she said about whether the thought of not walking again crossed her mind. "But I think in that situation, me and other many people in my situation just have to keep believing that they will."