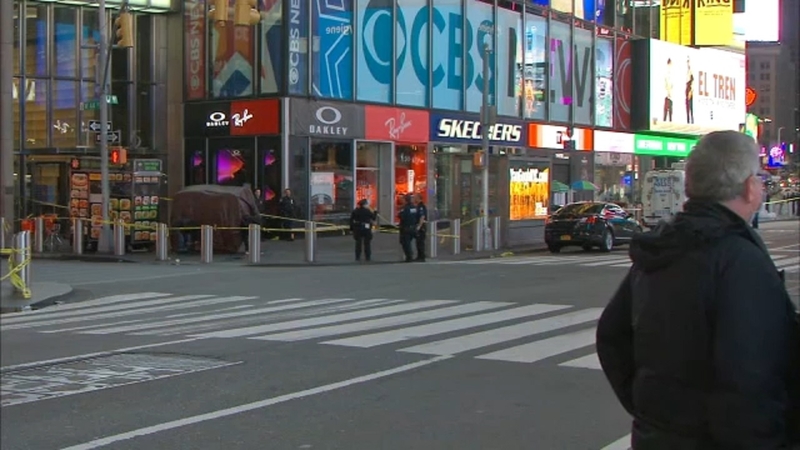 TIMES SQUARE, Manhattan (WABC) -- The shooting of three innocent bystanders including a 4-year-old girl who was toy shopping in Times Square on Saturday afternoon when someone opened fire during a dispute between several men renewed calls for change to curb the rising violence in the city.

Mayor Bill de Blasio called the shooting "senseless violence" and vowed the suspects will be brought to justice.

Here’s the latest from Times Square:

Thankfully these innocent bystanders are in stable condition.

The perpetrators of this senseless violence are being tracked down and the NYPD will bring them to justice.

The flood of illegal guns into our city must stop. https://t.co/SjU2eQR09l

Police Commissioner Dermot Shea said city police officers have been seizing guns at an alarming rate over the past two years and he said "bad policies" were to blame. He declined to elaborate.

"How many kids have to get shot before we take this seriously?" NYPD Commissioner Shea said.

RELATED: Times Square shooting: Who are the victims?

City police officials previously have blamed bail reforms that went into effect last year for putting offenders back on the streets, but there's little evidence people freed from jail are behind the new crimes.

"We had an innocence 60 year old pushed onto the subway trucks (earlier today). The individual was almost immediately arrested by responding police officers. It is the third time the third time this year already that that individual has been arrested for unprovoked assaults," Shea said. "When is this going to end? How many more people have to be injured, pushed in front of a train or in this case a young four year old toy shopping shop."
EMBED More News Videos

A portion of Times Square has been shut down after three people were shot, including a 4-year-old child.

State Senator Brad Hoylman, who represents the district in Albany and is an advocate for bail reform, instead points to illegal guns as the problem.

Police seized two-and-a-half as many firearms in March compared to a year ago, but the pipeline for illegal weapons continues to flow

"Something's gotta be done about illegal guns coming from other states that don't have the background checks that New York has but we're getting stuck with them and this is the sad result of that," Holyman said.