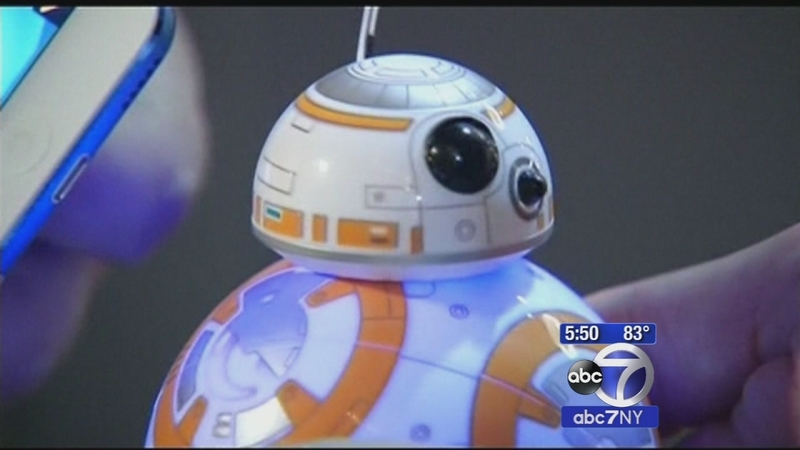 TIMES SQUARE (WABC) -- Today is a day 'Star Wars' fans all around the galaxy have been waiting for -- Force Friday! Merchandise for the new "The Force Awakens" movie went on sale at 12 a.m.

Analysts expect Star Wars-branded merchandise to bring in $5 billion in 2016 alone, while the movie itself will add another $2 billion in global box office sales.

"The Force" is taking over Times Square in epic fashion, with dozens of "Star Wars" fans lining up early in anticipation of the release of several new toys and collector's items.

Doors opened at midnight at the Disney Store and for many, the collectibles represent priceless memories they've held onto for decades.

More than 30 years ago, our imaginations were taken on an incredible journey in a galaxy far, far away, and "Star Wars" quickly won over fans around the world, becoming one of the highest grossing film series in history.

"My father got me into it," fan Elijah Catrone said. "It's been a big part of my life and even after both my parents passed, it's something that has kept me close to them."

On the verge of the eagerly awaited Episode VII, long lines formed outside retail stores around the country.

On YouTube, Target posted a video to help drum up excitement.


"I think it's the fact that I didn't think there would be more Star Wars movies," fan Matthew Boccia said. "And then, all of a sudden, there are. And the original characters are going to be in it, so that's a big deal in itself to me. And I want to be part of the experience."

Meanwhile, old and new fans alike say they're most looking forward to the new LEGO Millennium Falcon set, a remote control version of the X Wing, along with the toy version of a new character named BB-8, a ball shaped robot you'll be able to control through an app on your phone. It's merging a little old with the new to create more priceless memories to pass on the next generation of Jedi.

The Times Square Disney Store isn't the only one participating in this midnight madness, others in Chicago and San Francisco are also spreading "The Force."

The Walt Disney Company is the parent company of Disney Consumer Products, Lucasfilm, and this station.

#starwars Some of these action figures from the 70's sell in the three figures. Go figure... pic.twitter.com/XakyZmOYP1

#starwars found it at a small store in the Haight. pic.twitter.com/xKlrQUZk0P

#starwars "There is definitely some hype to this," says Luke, who also sells the original stuff. pic.twitter.com/zYgMbqNq4q

#starwars Some of these action figures from the 70's sell in the three figures. Go figure... pic.twitter.com/XakyZmOYP1

#starwars May the sales force be with you pic.twitter.com/07bQUYYWKZ

#starwars Amaman appeared on screen only a few seconds? Worth major bucks. pic.twitter.com/OT3QjdtPqs

#starwars This is more than I ever thought I would learn about Star Wars action figures. Luke looks a little beat up pic.twitter.com/AKcuiP0rf4

#starwars now I remember who my dog reminds me of when hungry. pic.twitter.com/Rdm3PapqJ0