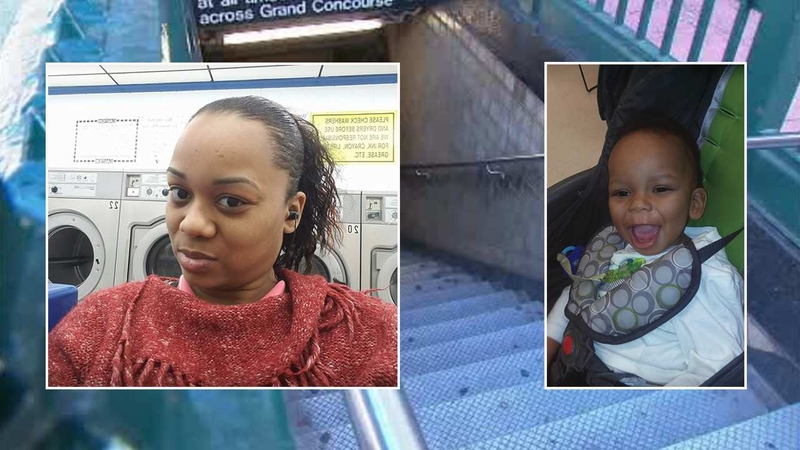 MELROSE, Bronx (WABC) -- A mother has been charged, accused of shoving her toddler strapped in a stroller down subway stairs in the Bronx Thursday.

Around 2:30 p.m. at the 149th Street and Grand Concourse Station in the Melrose section, police said a 2-year-old boy was strapped into a stroller, then shoved down an entire flight of cement stairs by his mother.

"He was all busted up by the time they brought him up," Smith said. "Baby was screaming, busted his eye, his nose was bleeding, blood was coming out of his mouth, his head was bleeding."

Mixon lives in a city-run homeless shelter in Morris Heights.

In the criminal complaint, officers that first arrived on-scene say they witnessed Mixon screaming, "I don't care anymore, I don't care anymore, you can have the baby." They say she then admitted to throwing the toddler. "Yes, I threw the baby down the stairs, you can have him. I don't want the baby, I don't give a (expletive) about the baby. I already have a case with ACS."

Mixon, of the Bronx, was taken to Bronx Lebanon Hospital for a psychological evaluation.

"She just stood right there against the wall and just stayed there, that's it. She kept on saying, 'I don't care about the baby. I don't want him,'" Smith said. "For a mother to do that, she must have been under a hell of a lot of pressure or something, for a mother to do that to a baby, I don't know."

The 2-year-old boy was taken to Lincoln Hospital in serious but stable condition. He suffered a cut to his left eye and an abrasion to his head.

Mixon pleaded "not guilty" at her arraignment on Friday.