7 On Your Side: Is this towing company preying on drivers? 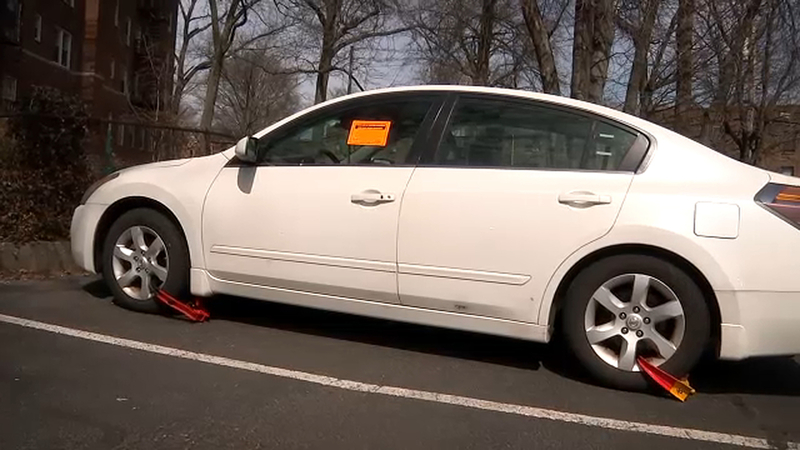 7 On Your Side: Is towing company preying on drivers?

MAMARONECK, Westchester County (WABC) -- You pull into a strip mall and park, but as soon as you step off the property, the boot brigade locks your car up, just seconds after you leave.

"It just seems completely unfair," said a parker who was so peeved about having to pay for freedom, she confronted the owner of the parking lot patrol who booted her car.

"I said sir, I don't see any signs indicating this is private property," said Nicole Ball.

Nicole was talking about a sign bolted to the side of the strip mall.

"I hadn't seen it and it was so scratchy and small I had to lean in close to see what it said," said Nicole.

"That sign is by the exit. It's not by the entrance, it's not called out in bright colors," said the Westchester County legislator. "And for anyone who drives in casually there's really nothing that would suggest you can't park here for a limited amount of time."

Westchester's Majority Leader even got in the tower's grill, scolding him during our interview. "I think that the way you do your job is questionable and to take advantage of people like this, it's absolutely awful," said Parker.

And voila, more signs sprang up all over the lot. But the tower wouldn't take back the tickets he issued.

I asked the owner of the tow company, Mario Dilonardo, why if there's no problem did he put up additional signs?

"I only did that as a courtesy. I didn't have to," said Dilonardo.

He says he plastered the lot only to avoid more issues in the future, but stood by his right to boot and tow for the shopping center businesses.

I asked Mario whether his signs were adequate and conspicuous. "To the letter of the law, yes," he said.

"He did not have the proper signage," said Maisano. "It has to be 'clear and conspicuous', so people coming to the lot would know the towing takes place."

Maisano's office issued three violations totaling $3,000, offering the first time offender a settlement. But he turned it down.

"I feel I'm in the right and if I plead out to the violations I don't want it portrayed that it was a scam, which it's not," said Dilonardo.

Dilonardo has an administrative hearing Wednesday that will rule on his three violations.

The big takeaway - Know your rights. Laws differ, but usually private parking signs must be posted conspicuously before they can boot or tow you.

Take pictures of the parking lot And notify your local consumer affairs if you don't think the warnings were adequate.

And if you get the boot, try to negotiate the price down. We witnessed a woman only having to pay half the cash price. She said it was all she had in her purse.