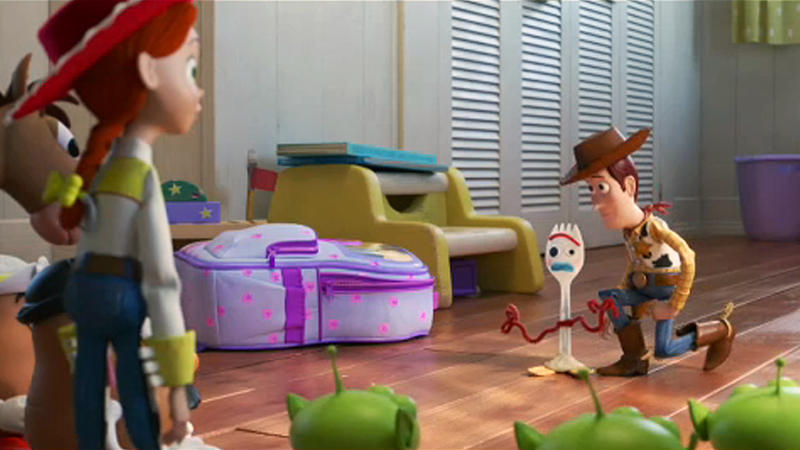 NEW YORK (WABC) -- "Toy Story 4" is expected to gross more than $140 million this weekend, and having seen this terrific new movie, I can certainly understand why.

If you loved the previous Toy Story films, then you're really going to like the fourth in the series.

The toys belong to a new child now, and Woody -- given life by Tom Hanks -- wonders why Bonnie doesn't seem that interested in him. To try and make himself useful, he tags along when she starts kindergarten.

"Bonnie made a friend in class," he reports back to the other toys. "She literally made a new friend."

Then he introduces Forky, made with Bonnie's own hands.

Related: Who is Forky? Meet the new characters from the movie

Pixar expands the scope of this "Toy Story" by sending the little girl and her family on a road trip, complicated by the fact that Forky keeps wanting to throw himself away.

Looking to keep him safe, Woody follows him, and they both enter an antique store where creepy toys made me laugh. So did Keanu Reeves as Duke Caboom, Canada's greatest stunt man.

One critic complained Tim Allen as Buzz Lightyear is "underused," but perhaps that's because the reunion of Bo Peep and Woody takes up so much time.

She wasn't even in "Toy Story 3," and I cheered her return as an alpha-female, voiced again by Annie Potts.

There's toy-appropriate romantic tension between those two, but to say more would be to spoil the plot of a movie so many of you will seeing soon.

"Toy Story 4" is from Pixar and distributed by Disney, both owned by the same parent company as ABC 7.