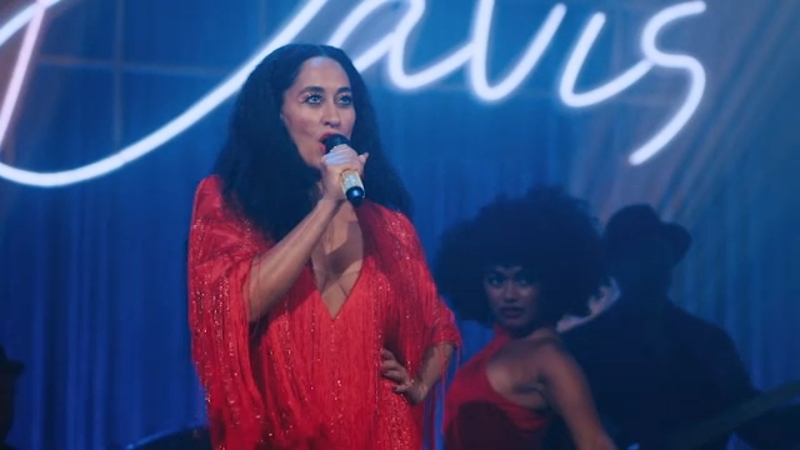 NEW YORK (WABC) -- As the star of ABC's hit sitcom "Black-ish," Tracee Ellis Ross has stepped outside of the giant shadow of her famous mother, Diana Ross. But in a new movie available by way of video on demand, the TV star confronts her legacy directly.

You will find echoes of her mother throughout "The High Note," as Ellis Ross plays a superstar singer now in her 40s.

This daughter of a legend has the really formidable task of coming face-to-face with her own legacy on the icon's home turf: the concert stage. Many a performer whose career was built on music would suffer by comparison, but Ellis Ross pulls it off.

Half a dozen seasons on "Black-ish" have given her a separate identity, so now must have seemed like as good a time as any to take this particular risk.

"As a kid, it was something that I always wanted to do," she said. "For this role, I had to face the dream and the fear all in one."

Her character, superstar singer Grace Davis, is past 40 and facing facts.

"It's really bleak out there for middle-age singers," she tells her loyal assistant, played by Dakota Johnson.

Her manager, played by Ice Cube, suggests a residency in Las Vegas, noting that, "All we gotta do is play it safe and stack some money."

Her assistant dreams of producing new music for Grace so that she won't get "buried under all this flashy garbage."

The movie is a fairy tale, as life in the real music business is a lot more difficult, and the divas are more demanding than Grace.

Ellis Ross' charisma, so perfect for the small screen, falls short of the kind of star power you need to have to fill big arenas as a superstar, but her performance is credible enough that even her notoriously critical mother has said she approves.

I give Ellis Ross a lot of credit for accepting a difficult challenge, and the end result is a brand new movie to watch on demand at home.

And it's great timing, because "The High Note" arrives at a time when many of us are running out of of new things to watch. I found this to be a pleasant way to escape for a few hours.