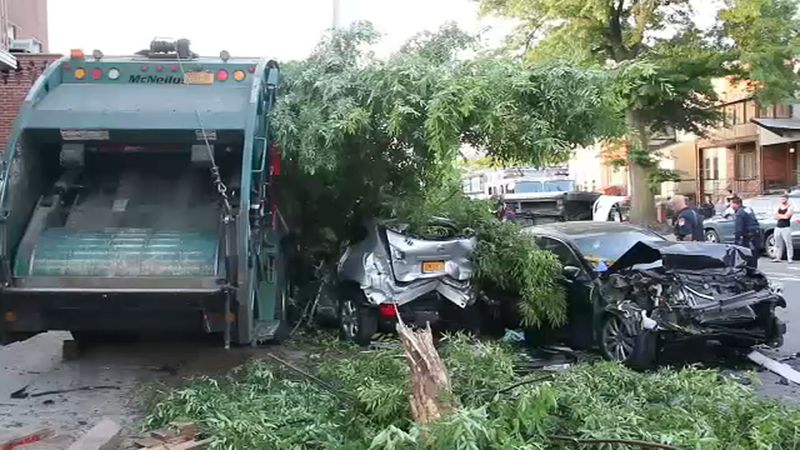 NEW YORK CITY (WABC) -- The NYPD has launched a crackdown on private sanitation trucks after 20 fatal crashes since 2016 and a number of other high-profile incidents.

Authorities say two spot checks last week in Manhattan and Brooklyn resulted in a staggering number of violations. In just a couple hours, 57 summonses were issued in in Brooklyn and 47 in Manhattan.

Virtually every vehicle stopped had a violation, officials said, ranging from worn-out brakes to fuel leaks and lights that didn't work.

"They're running red lights, backing unsafely through intersections," NYPD Chief of Department Terence Monahan said. "We looked at their equipment, and there's a lot of violations in their equipment, making these trucks unsafe to drive."

As part of the enhanced citywide enforcement effort, the NYPD and the Business Integrity Commission are deploying at least one vehicle in every precinct during the overnight hours during the week of October 28.

Additionally, NYPD highway units, the Strategic Response Group, and the specialized Motor Carrier Unit -- all of which specialize in truck inspections -- will be deployed citywide throughout the week to conduct inspections of private trash trucks.

Police officers assigned to patrol received detailed internal guidance explaining the effort to curb dangerous driving by trash trucks and to write and issue summonses for traffic and equipment violations that are common with private trash trucks.

"In the middle of the night, trash trucks seemingly roll around with impunity," NYPD Commissioner James O'Neill said. "They often run red lights, cut off drivers, operate in bike lanes, and travel on the incorrect side of the road or go the wrong direction down one-way streets...Drivers can now expect to see the NYPD out in full force, ensuring that these companies and their truck operators adhere to the letter of the law."