Queens Boulevard, a.k.a. the Boulevard of Death, getting $100 million makeover 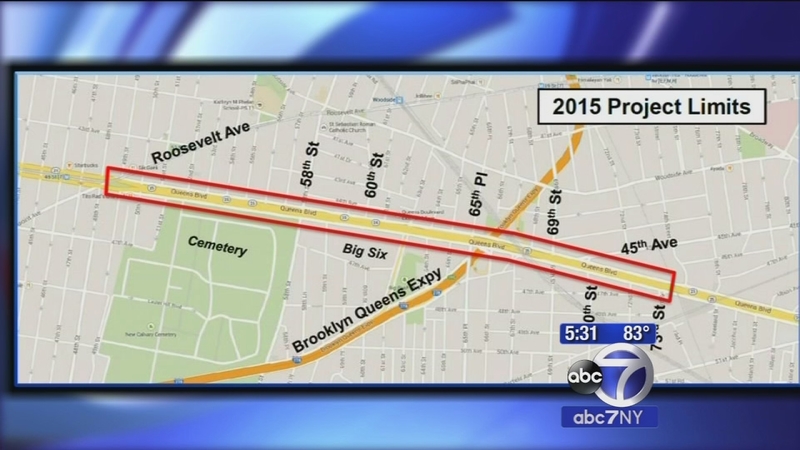 QUEENS (WABC) -- The $100 million makeover of Queens Boulevard, long nicknamed the Boulevard of Death, is underway.

Mayor Bill de Blasio announced that shovels are hitting the ground on the Vision Zero project to redesign the thoroughfare as a safe, livable corridor that will protect residents, connect neighborhoods and improve the borough's quality of life. City officials say that in its first year of operation, Vision Zero resulted in the safest for pedestrians since record-keeping began in 1910, and 2015 is shaping up to be even safer.

The project, unanimously approved by the local community board, dramatically designs one of the city's most dangerous streets, bringing safer crossings and more crosswalks for pedestrians, protected bicycle lanes, expanded medians with trees and plantings, and reconfigured intersections that deter speeding and other dangerous behavior.

Since 1990, 185 New Yorkers have lost their lives on Queens Boulevard, most of them pedestrians. The first phase of the project will target 1.3 miles of Queens Boulevard between Roosevelt Avenue and 73rd Street in Woodside. Between just 2009 and 2013, six people were killed on this stretch of roadway, 36 suffered severe injuries and 591 more were hurt in crashes. The improvements will be installed through October, followed by the project's extension further east in 2016.

"We don't accept that streets like Queens Boulevard have to be dangerous, that children and grandparents have to be taken from their families year after year," de Blasio said. "And so, shoulder-to-shoulder with this community, we are taking action on one of the most ambitious and complex overhauls ever undertaken by the city...Today, we begin work on the Boulevard of Life."

Lizi Rahman, whose son Asif Rahma was killed while riding a bike along Queens Boulevard, quickly joined the effort to help turn the notorious street into a roadway safer for future pedestrians and bicyclists.

"All his dreams came to an end on that day, by that freight truck," she said. "If there had been a bike lane. Perhaps my son would still be alive."

Re-engineering dangerous roadways is a key pillar of the Vision Zero initiative to eliminate roadway fatalities, alongside traffic enforcement and education. Queens Boulevard is one of four major corridors being redesigned for safety under the $250 million Great Streets initiative funded in this year's budget, in addition to 50 priority intersections and streets overhauled for safety each year by the DOT.

The Queens Boulevard redesign process began in January with DOT-sponsored workshops to gather community input on safety needs, and a complete study of traffic and safety conditions. In March, the DOT presented a draft design to Community Board 2's Transportation Committee, and in May, returned to the Board to respond to and discuss the community's comments. DOT returned in June to both the Transportation Committee and Full Board to present and secure support for the final plan, which it did in a unanimous vote.

When implemented, the project will significantly improve safety on the corridor. The new design will route through-traffic on the main line roadway and reduce motorists' switching repeatedly between the main line and service road via "slip lanes." The plan eliminates highway-like design features that encourage speeding, and completes the pedestrian network by connecting neighborhoods with new crossings. The DOT will implement the following improvements:

--Safer crossings will be installed along the corridor. Pedestrian islands will be constructed at 65th Place and 50th Street so pedestrians can cross the boulevard in stages, rather than dashing across. A new midblock crossing will be constructed between 72nd St and 73rd St to give pedestrians more opportunities to cross Queens Boulevard. High visibility crosswalks and new signals will be added to Queens Boulevard at the BQE ramps at 66th Street and at 68th Street to provide safer crossings.

--DOT will add protected bike lanes with buffers and new pedestrian space along the median next to the service lane in both directions. A raised, concrete bicycle path, separated from traffic, will be constructed under the overpass on the eastbound service road from 67th Street to 69th Street.

--Pedestrian ramps along the corridor will be upgraded to be ADA-compliant, improving accessibility for New Yorkers with disabilities.

--Low-volume slip lanes will be closed to reduce conflict points. The slip lane between 54th Street and 56th Street will be closed, and at 59th Street, 59th Place and 61st Street, slip lanes will become STOP-controlled turn lanes - which slow speeds and allow for safe bicycle and pedestrian crossings. DOT will construct a new slip lane transition between the main and service roads at 64th Street, closer to the entrance to the BQE.

--Access to the BQE tunnel will be reconfigured at 65th Place to better organize traffic flow and create safer driving conditions.

Following completion of this work, capital improvements on this stretch will start in Fiscal Year 2018. DOT will soon begin work to redesign Queens Boulevard from 73rd Street to Eliot Avenue, and then from Eliot Avenue to Jamaica Avenue.