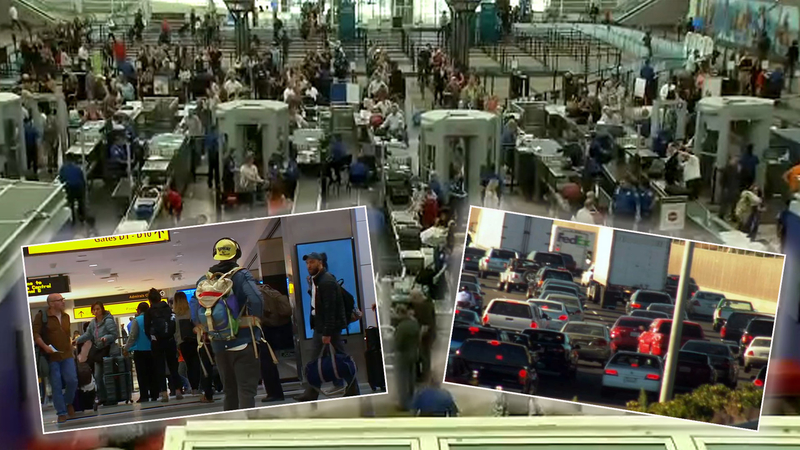 NEW YORK CITY (WABC) -- The Thanksgiving holiday getaway ramps up Wednesday as record numbers of people are expected to head out for the extended weekend.

Experts say this will be the busiest Thanksgiving travel weekend in America since 2005, and 6 million people are expected to pass through New York's airports, bridges and tunnels over the next five days.

And the worst time to travel? Experts say that's Wednesday between 5 p.m. and 7 p.m., when they expect travel to take 3.5 times longer than normal.

Good morning from @LGAairport which is in the middle of another record breaking year. Worst time to fly? Tonight between 5:15 and 7:15, delays 3.5x higher than normal, according to @AAA_Travel #abc7NY pic.twitter.com/NjQ3lsccu9

AAA says is in all, 55 million Americans are traveling 50 miles or more for this year for Thanksgiving. That is up 1.6 million people from last year.

Air travel is seeing the biggest increase, up 4.6 percent from 2018.

The Port Authority says that means another record year for New York's airports, which also broke a record in 2018 as well.

And at LaGuardia Airport, officials remind everyone that construction work is continuing. So if you are heading there, either to depart or wait on loved ones arriving, they urge you to use the M60 or Q70 Select buses.

Both will be running free of charge all weekend long.

Several flight delays and cancellations were reported Wednesday within the U.S. as two powerful storms threaten more than 100 million Americans in 32 states on one of the busiest travel days of the year.

So far, Minneapolis/St. Paul International is the most affected airport by weather conditions, as heavy snow was moving from northern Kansas and Nebraska into Minnesota. Up to a foot of snow is possible in that area.

Travelers should continue to be wary as winter storm warnings stretch from Michigan all the way to the West Coast.

Already, a wintry storm left at least one person dead in the Midwest and was expected to push eastward into South Dakota, Iowa, Michigan, Minnesota and Wisconsin, while a "bomb cyclone" weather phenomenon was expected to simultaneously topple trees, knock out power and dump snow as it rolled into California and Oregon.

At Denver International Airport, about 10 inches of snow mixed with winds that limited visibility prompted the cancellation of about 30% of the airport's average daily 1,600 flights.

The storm system could also mean disappointment for fans of the larger-than-life balloons flown at Macy's Thanksgiving Day Parade.

Organizers said balloons for the parade fly lower or end up grounded if sustained winds top 23 mph with gusts in excess of 34 mph. A decision will be made Thursday morning.