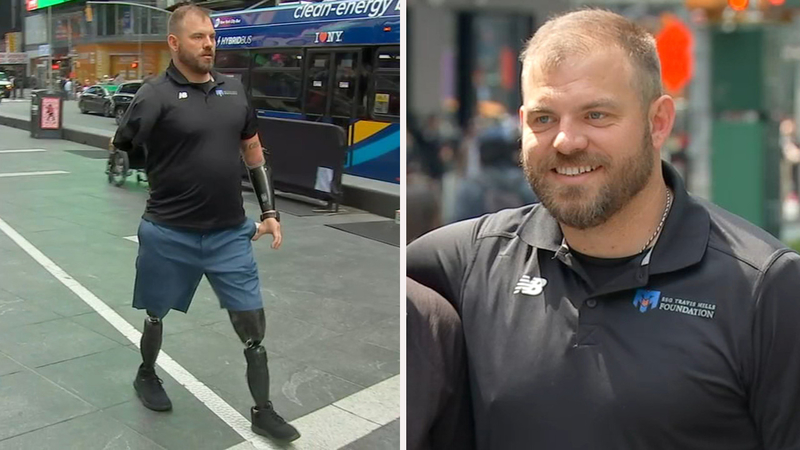 An Alive Day is the anniversary of the date when a veteran almost lost their life in combat, and Mills joined city officials and producers from Broadway's "Come From Away" to highlight the Big Apple as a welcoming home for veterans.

"I didn't mean to get blown up, but I did," he said. "Everybody in the world rallied behind me, and New York has been right at the front of it."

Mills was inspired to join the army following the events of September 11th.

"I joined because of 9/11," he said. "I wanted to give back to my country and do everything I could to help with what happened here. And unfortunately, I had a bad day at work."

He lost his legs and arms when he set his rucksack down on an improvised explosive device while on his third tour in Afghanistan.

"I didn't see it coming, I set my backpack on the ground, and it changed my life forever," he said. "I think (humor) also helps people feel comfortable around me, too. They don't know how to react to me, so I like to tell jokes and have a good time. The thing is, I'm the same person I was before. Like I said, I just had a bad day."

Since his injury, Mills has dedicated his life to allowing soldiers with similarly grievous injuries to live just as others do and paying it forward through his work with the Travis Mills Foundation, which has helped veterans and many of their families from 46 states overcome physical challenges and obstacles.

"Life goes on, so I try to give them the inspiration of never give up, never quit, to push forward in life and to make each day their own," he said. "Because it's up to them to keep pushing forward, and it's too easy. It's too easy to just keep trying and keep going forward than it is to slow down and do nothing."

Travis was injured at 25, and he's now 35 with a wife, two children, and some businesses.

"I own a marina and lodge on a lake with 180 boat slips and a small cafe," he said. "And right next to it, I just opened a restaurant."

So what's next for him?

"Great whites," he said. "I'm going to go shark diving with great white sharks...They can't bite me unless it's a vital bite, so it's all or nothing this time."