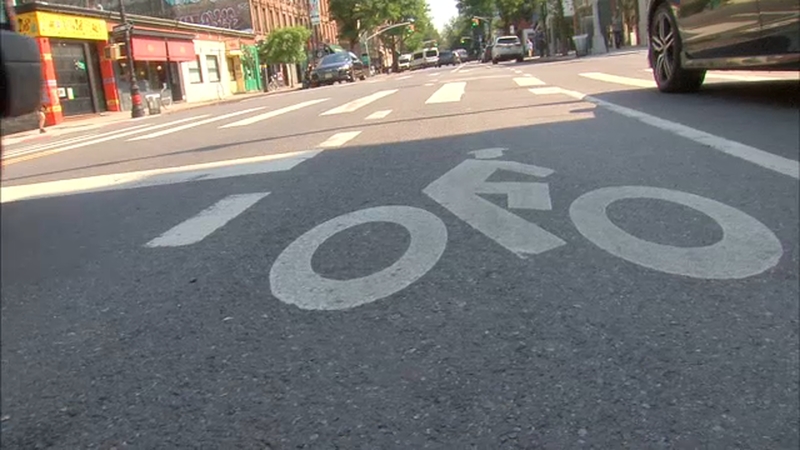 PARK SLOPE, Brooklyn (WABC) -- Police tell Eyewitness News they are cracking down on unsafe driving after a spike in fatal crashes involving bicyclists this year.

Many of those crashes happened in Brooklyn.

That includes 16-year-old Yisroel Schwartz, who was riding his bike after school one afternoon in May in Borough Park when a work van ran him over and killed him.

But investigators say it was actually someone who opened their car door without looking who flung Schwartz into oncoming traffic.

"We have a long way to go to get to our overall goal, and the truth is we're trying to change the culture," Fulton said.

In this exclusive interview, Fulton laid out the troubling numbers.

Through May, 10 people have died while riding bikes in the city. That's up from five during the same time in 2018, a 100% increase.

Despite that trend, police say cycling in the city is safer than ever.

Park Slope father of two Doug Gordon is part of that revolution on two wheels. He preaches the gospel of car-free living on his blog, Brooklyn Spoke.

"The majority of New Yorkers just don't own a car to begin with, and we live our lives just fine," Gordon said.

He's encouraged to see hundreds of miles of new protected bike lanes, but he says new projects are often delayed.

"We're six years in to the de Blasio administration, and the first few years, we were just kind of ramping up Vision Zero," Gordon said. "But now that we have so much evidence that works, we should be building on those successes. We should be moving much faster than we are now."

In the meantime, Fulton says they're ramping up enforcement, deploying cops to neighborhoods and writing more summonses.

In fact, the city says they do have plans to install more protected bike lanes, including on 4th Avenue in Park Slope. But critics say those plans are clearly not moving fast enough.