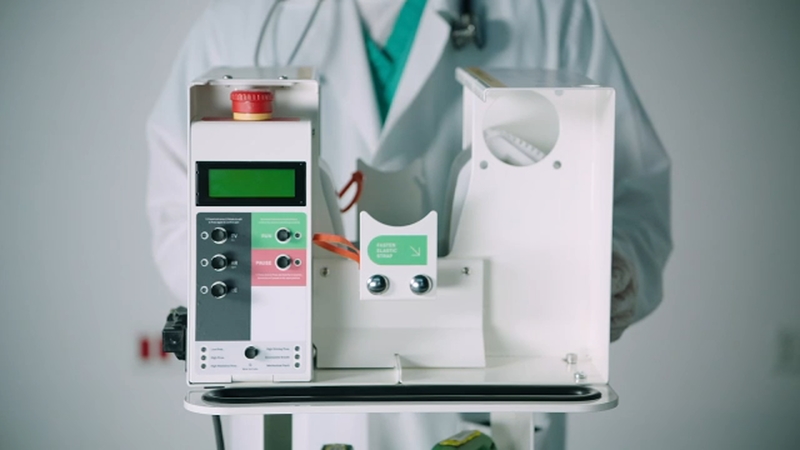 New line of 'bridge' ventilators to be produced for NYC hospitals

NEW YORK CITY (WABC) -- Mayor Bill de Blasio announced Tuesday a breakthrough in the fight against the coronavirus as a new line of "bridge" ventilators will be produced to support New York City's hospitals and health care workers.

City officials say local manufacturers will produce at least 3,000 of these devices, which will be deployed to hospitals, helping to save lives by supplementing limited ventilator resources. The effort will also help shore up the New York City Strategic Reserve, a stockpile of medical devices that will be ready for any future crisis.

"This is a story about doing the impossible - so it's a New York story," de Blasio said. "We'd never made a ventilator before - and so we made thousands. We learned it would take a year - and so we did it in a month. Our city is taking our future into our own hands. That's how we'll beat this crisis and prepare for the next."

"This city-led partnership demonstrates New York's abilityto act and innovate quickly," Patchett said. "In record-time, we've been able to design and produce life-saving technology.This project highlights the very best of New York City, and we're proud to be a part of it."

Inspired by the open-source design of MIT's Emergency Ventilator (E-Vent) prototype, the consortium developed the Spiro Wave, a bridge ventilatorthatcan replace manually operated bag valve masks and serve patientscoming on or off traditional ventilators. These machines will free up critical care and ICU ventilators needed for those who are seriously ill.

The Spiro Wave received Emergency Use Authorization by the U.S. Food and Drug Administration on April 17, and has been successfully demoed in a hospital setting by New York City health and hospitals staff.

Boyce Technologies, which is leading a revival in industrial manufacturing at its high-tech factory in Long Island City, has used machine automation and advanced laser-cutting technology to take the Spiro Wave from initial concept to a scalable manufacturable design in an unprecedented amount of time. The devices are substantially less expensive than traditional ventilators.

EDChas committed to purchase the first 3,000 devices on behalf of the city anddistribute them to healthcare facilities and hospitals. Boyce Technologies is in the process of manufacturing hundreds of these devices. The first units will be ready to ship to NYC hospitals this week.

EDC has also secured the right to purchase 70% of all units produced to ensure the needs of local hospitals are met. EDC is focused on getting devices to local hospitals - public and private - that are interested in using them to supplement existing full-scale ventilator resources.

This initiative builds upon a decade of work bythe Cityto preserve and expand advanced manufacturing in New York City.