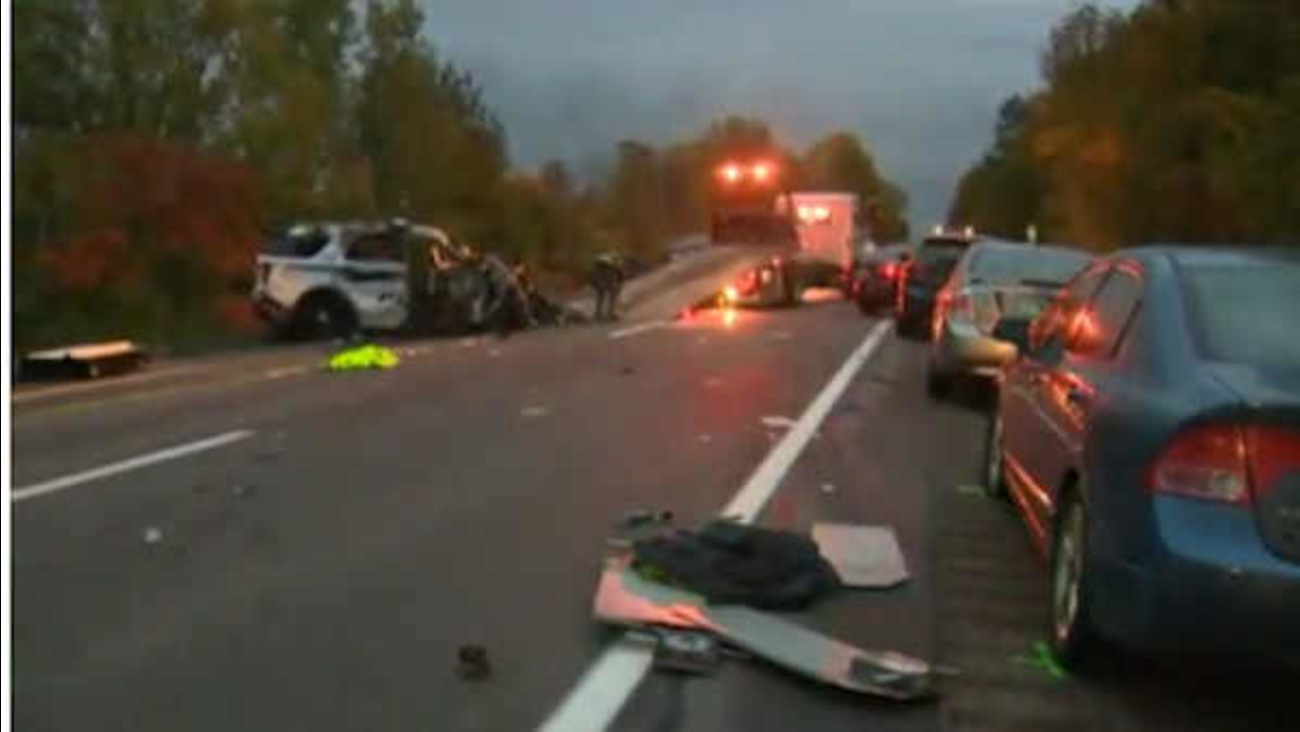 Local news outlets are reporting those killed were teenagers riding in the same vehicle, which had been traveling south on Interstate 89 in Williston. Their identities were not immediately released.

Emergency dispatchers started getting calls about a vehicle traveling north in a southbound lane of the interstate Saturday, just before midnight. State and local police officers tried to locate the vehicle, but soon began getting reports of the crash.

A vehicle was in flames when a Williston officer arrived at the scene. He grabbed a fire extinguisher before pulling a female victim away from the burning vehicle, authorities said.

The cruiser struck seven vehicles. The driver, identified by police as 36-year-old Steven Bourgoin, was thrown from the cruiser, which also burst into flames. Police had not determined whether Bourgoin was the driver who caused the initial crash.

Bourgoin was taken to the University of Vermont Medical Center, where spokesman Mike Noble said he was listed in critical condition. It's unclear if Bourgoin has an attorney.

Several people injured in crashes caused by the cruiser were taken to the hospital, but Noble could not say how many were treated. Police said none of the injuries appeared to be life-threatening.

Paul Swann, of Waterbury, was headed home when he came upon the scene of the first crash. He told WCAX-TV there was debris everywhere and he heard people yelling and screaming before he saw the police cruiser drive away. It returned several minutes later.

"The only thing I could do was try and yell and just gasp as this thing came flying in," Swann said. "I couldn't even believe what I was seeing when the cruiser came back in in that high rate of speed and just no brakes, no nothing."
Related topics:
wrong wayaccidentcrash
Copyright © 2022 by The Associated Press. All Rights Reserved.
TOP STORIES
Wounded NYPD officer fights for life as funeral announced for partner
Man recovering after being shoved onto subway tracks
Mayor Adams faces growing challenge to make NYC streets safe
Woman finds $3M lottery prize in her spam folder
Teen shot in back of head among 3 injured in Brooklyn shooting
AccuWeather: Chilly with some sunshine
Family, friends remember fallen officer as kind-hearted young man
Show More
Deer rescued after falling through ice on Long Island
Family demands justice after 23-year-old woman found dead after date
Thousands of runners brave cold for NYRR Half-Marathon
5 tax changes that can boost your refund this year
Market drops 1,700 points, while inflation cancels out wage increases
More TOP STORIES News